GADSDEN, Ala. — Wes Logan said memories came flooding back to him throughout the Whataburger Bassmaster Elite at Neely Henry Lake.

That’s bound to happen when you’ve fished a place since you were 5 years old. 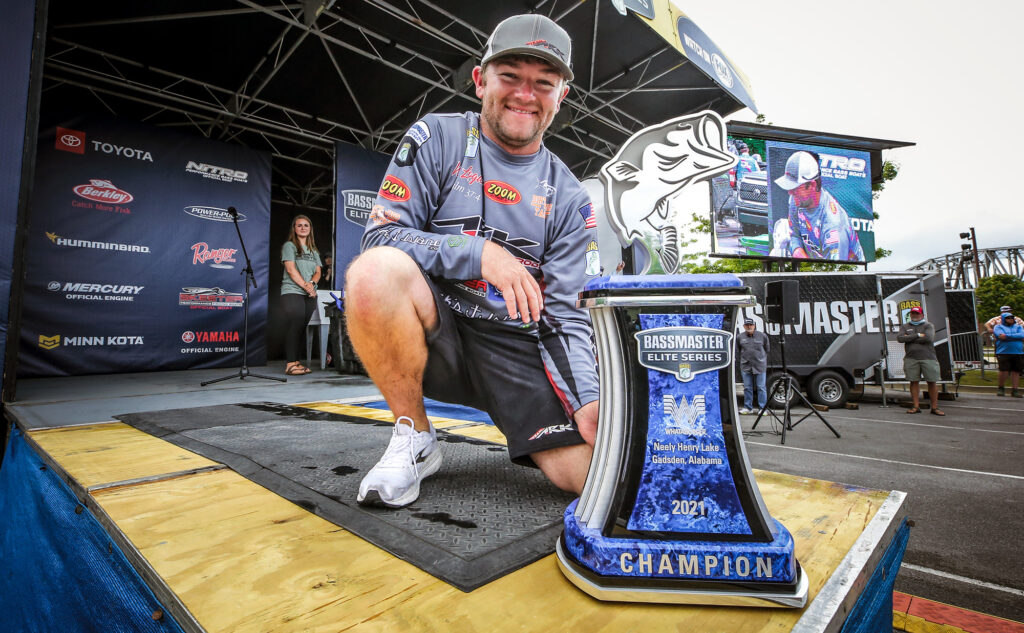 Logan now has countless new reasons to think fondly of his home water after claiming the tournament title here on Championship Monday. The 26-year-old from Springville, only a 30-mile drive from the Gadsden City Boat Docks, caught a four-day total of 20 bass weighing 57 pounds, 9 ounces. He capped the competition with a 14-1 limit Monday, the third-heaviest of the day.

The second-year Elite Series angler charged into the lead on Day 3 with a 16-15 bag that tied for the heaviest of the tournament. That made him the last man to weigh in Monday and the only one with a chance to knock Connecticut pro Paul Mueller from the hot seat.

Logan peeked silently at the scale while his bass were weighed. When his winning total flashed on screen, he let out a victorious yell and pumped his right fist over his head. Then he hugged Mueller and hoisted his first blue trophy for his home-based fans to see.

“I started tournament fishing with my dad when I was 5,” Logan said. “We’d come here, Logan Martin and Weiss … I went into practice trying to not put pressure on myself. I wanted to fish like I’d never seen the place before. I wanted to figure out a pattern.”

Having an open mind, even on water he knows so well, was critical this week. Neely Henry was a difficult read for most of the 98 anglers who started the tournament on Friday, postponed by a day because of heavy rains earlier in the week. The storms sent the water table rising and shot sediment throughout the lake. The Elites scrambled to find stable water, many relying on junk fishing to see which lures and techniques produced the best bites.

A trio of lures worked best for Logan — a 5/8-ounce Dirty Jigs Matt Herren flipping jig (black/blue skirt) with a Zoom Big Salty sapphire blue Chunk; a Dirty Jigs No Jack swim jig with a Zoom Super Speed Craw trailer; and a frog, which he used to fill his Day 3 limit.

Logan started the tournament strongly, putting 14-1 on the board Friday, good enough for ninth place. He caught 12-8 on Day 2, climbing to eighth and surviving the cut to 48. He made his move on Day 3 with the 16-5 haul, pointing to a pair of unusual catches as the turning point.

“I caught two bass under a bridge right by the Gadsden City Boat Docks on a crankbait,” he said “I’m not a crankbait fisherman. It was about 11:30, and I only had two keepers at the time. But I caught a 2 1/2 there, and then two casts later, I caught a 5 1/4. I only got one more bite that day.

“When you get that kind of bite when you’re not supposed to, that let me know I had a chance to win. Stuff like that just doesn’t happen all the time.”

Logan didn’t divulge specifics on the crankbait, other than to say it’s specially painted, similar to a black/chartreuse combo.

“I keep that one in my hand around here,” he said. “It’s a confidence thing.”

Logan planned to fish down-lake from the start, but low water in that area made him choose otherwise. Each of the 20 bass he weighed was caught between Cove Creek and Minnesota Bend — both only a 10-minute run from the Gadsden City Boat Docks.

Mueller, meanwhile, went straight for the lower end of Neely Henry and found success. He seized the lead after Day 2 and was in second place going into Day 4, trailing Logan by just more than a pound. Mueller caught the heaviest bass of the tournament Monday, a 6-6 largemouth, but his 13-13 closing weight wasn’t enough to overtake Logan.

“My pattern went away today and I knew that would be the deal,” Mueller said. “I had to fish new water. I was able to catch some fish, and I had a good day. I’m glad at the way this turned out. As short as the morning bite was, I could have been sitting in sixth or seventh right now.”

Mueller caught his best bass, including the 6-6, on a Deps Evoke 2.0 squarebill crankbait (chartreuse/brown back). He earned an additional $2,000 for having the Phoenix Boats Big Bass on Day 4 and overall.

As part of the Yamaha Power Pay program, Logan earned $4,000 for winning while Christie claimed an additional $1,500 for being the second-highest placing entrant.

Minnesota pro Seth Feider finished 12th in the derby and didn’t qualify for Championship Monday, but he still left Gadsden with a commanding lead in the Bassmaster Angler of the Year standings. His season total of 525 points gives him a 41-point cushion over Patrick Walters of Summerville, S.C., (484) with three tournaments remaining.

Brock Mosley of Collinsville, Miss., is third with 464, followed by Brandon Palaniuk of Rathdrum, Idaho, with 462 and Christie with 457.

Bryan New of Belmont, N.C., is leading the Rookie of the Year standings with 372 points.

The City of Gadsden and the Greater Gadsden Area Tourism hosted the event.