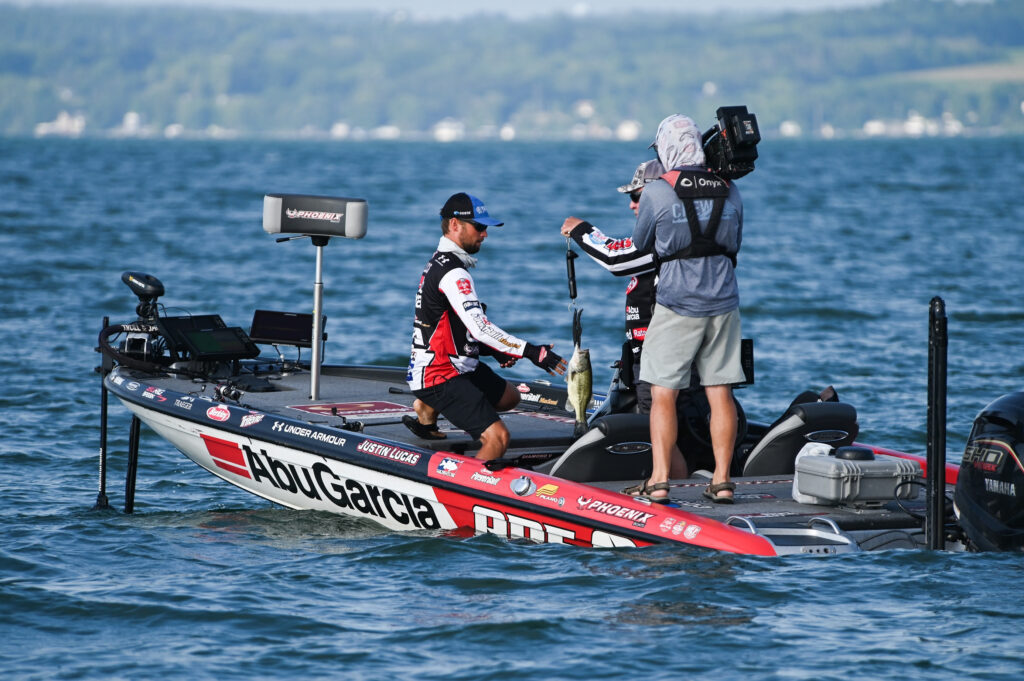 Lucas’ two-day Qualifying Round catch of 51 bass totaling 181 pounds, 1 ounce – the fourth-largest two-day total ever weighed in Bass Pro Tour history – earned him the win by a 16-pound, 7-ounce margin over Academy Sports + Outdoors pro Jacob Wheeler of Harrison, Tennessee, who caught a two-day total of 56 bass weighing 164-10 to end the round in second place. Favorite Fishing pro Zack Birge of Blanchard, Oklahoma, caught a two-day total of 33 bass weighing 124-3 to finish the round in third, while Waco, Texas, pro Alton Jones, Jr., ended the round in fourth place with a two-day total of 37 bass, good for 123-2. Rounding out the top five was Googan Baits pro Dustin Connell of Clanton, Alabama, who caught 30 bass for 118-11 to advance in fifth place.

The six-day tournament, hosted by the Village of Union Springs, showcases 80 of the best professional anglers in the world competing for a purse of more than $805,000. The tournament is livestreamed each day at MajorLeagueFishing.com and the MOTV app, and also filmed for television broadcast later this fall on the Discovery Channel.

Lucas, who started the day atop the leaderboard, lost the lead in Period 1 to a red-hot Wheeler, but regained the lead with a strong Period 2 and held it throughout the third and final period.

“Man, that was a tough day. That was not nearly as easy as Saturday, for sure,” Lucas said in his post-game interview. “Somehow, I ended up with 54 pounds today, but it felt a lot tougher. It felt like I was taking on King Kong today in Wheeler. He is so dominant, lately, and when he caught 41 pounds in the first period I was just like ‘here we go’. This is going to be the day he’s going to smack them and knock me out of first.

“But, we were able to go into the second period and catch some nice fish, and thankfully Jacob seemed to struggle. That dude is so dangerous, so I’m very thankful to get him this time in the Qualifying Round. I definitely expect to see him again in the Championship Round.”

Like Saturday, Lucas caught all largemouth on Monday, relying on a drop-shot and a Neko rig.

“I’ve got to give all the credit to my Fantasista X rods from Abu Garcia, with a (Abu Garcia) Zenon spinning reel. I’ve been drop-shotting and Neko-rigging with that combo all week, and it is just unbelievably sensitive. Crazy sensitive – I can feel the lightest bites in the windiest of conditions out here.

“I don’t really know what I’m going to do in the Championship Round yet, but you’ve got to make it there first and I am very, very thankful to have made it,” Lucas went on to say. “That was, hands down, the goal coming into this tournament. This qualifies me into REDCREST next spring, which is amazing, and now I’ve got a chance to win this tournament, too.”

The top 20 anglers from Group A will now have an off day from competition Tuesday, while the 40 anglers competing in Qualifying Group B will complete their two-day Qualifying Round. The Knockout Round, featuring 38 anglers competing to finish in the top eight, will take place Wednesday. Thursday’s Championship Round will feature Lucas, Tuesday’s Group B winner, and the top eight anglers from the Knockout Round competing in a final-day shootout for the top prize of $100,000.

The top 20 pros in Qualifying Group A that now advance to Wednesday’s Knockout Round on Cayuga Lake are:

Overall, there were 391 scorable bass weighing 1,221 pounds, 12 ounces caught by the 40 pros Monday, which included 57 four-pounders and seven five-pounders.

The 40 Anglers in Group A competed in their two-day qualifying round on Saturday and Monday – the 40 anglers in Group B on Sunday and Tuesday. After each two-day qualifying round is complete, the anglers that finish in 2nd through 20th place from both groups advance to Wednesday’s Knockout Round, while the winner of each group advances directly to Thursday’s Championship Round. In the Knockout Round, weights are zeroed, and the remaining 38 anglers compete to finish in the top 8 to advance to the Championship Round. In the final day Championship Round, weights are zeroed, and the highest one-day total wins the top prize of $100,000.

Anglers will launch each day at 7:30 a.m. ET from Frontenac Park, located at 15 Creamery Road in Union Springs. Each day’s General Tire Takeout will be held at the park, beginning at 4 p.m. Fans are welcome to attend all launch and takeout events and also encouraged to follow the event online throughout the day on the MLF NOW!® live stream and SCORETRACKER® coverage at MajorLeagueFishing.com.

On Championship Thursday, Aug. 11, from 4:30 p.m. to 6 p.m. MLF will host a Celebration Event for fans of all ages, inviting fans to come out and celebrate with the professional anglers from the Bass Pro Tour as they crown the champion of the Fox Rent A Car Stage Six on Cayuga Lake Presented by Googan Baits. Before the celebration, an MLF watch party starts at 1:30 p.m., and the first 50 middle school or high school anglers in attendance will receive a free Abu Garcia rod and reel combo valued at $100. The final 10 Championship Round Bass Pro Tour anglers will be on hand at the trophy celebration to meet and greet fans, sign autographs, and take selfies.

The Fox Rent A Car Stage Six on Cayuga Lake Presented by Googan Baits will feature anglers competing with a 2-pound minimum weight requirement for a bass to be deemed scorable. Minimum weights are determined individually for each competition waters that the Bass Pro Tour visits, based on the productivity, bass population and anticipated average size of fish in each fishery.

The Bass Pro Tour features a field of 80 of the top professional anglers in the world competing across seven regular-season tournaments around the country, competing for millions of dollars and valuable points to qualify for the annual General Tire Heavy Hitters all-star event and REDCREST IV, the Bass Pro Tour championship, which will be held next March on Lake Norman in Charlotte, North Carolina.

The MLF NOW!® broadcast team of Chad McKee, Marty Stone and J.T. Kenney will break down the extended action on all six days of competition from 7:45 a.m. to 4:30 p.m. ET. MLF NOW!®  will be live streamed on MajorLeagueFishing.com and the MyOutdoorTV (MOTV) app.

Television coverage of the Fox Rent A Car Stage Six on Cayuga Lake Presented by Googan Baits will premiere as a two-hour episode at 7 a.m. ET, on Saturday, Nov. 12 on the Discovery Channel. New MLF episodes premiere each Saturday morning on the Discovery Channel, with additional re-airings on the Outdoor Channel. Each two-hour long reality-based episode goes in-depth to break down each day of tournament competition.