PLATTSBURGH, N.Y. (Aug. 8, 2021) – It was a back-and-forth battle at the top for pretty much the entire third period Sunday between pros Brandon Coulter of Knoxville, Tennessee, and Berkley pro Justin Lucas of Guntersville, Alabama, at the Toyota Stage Six at Lake Champlain Presented by Googan Baits in Plattsburgh, New York. 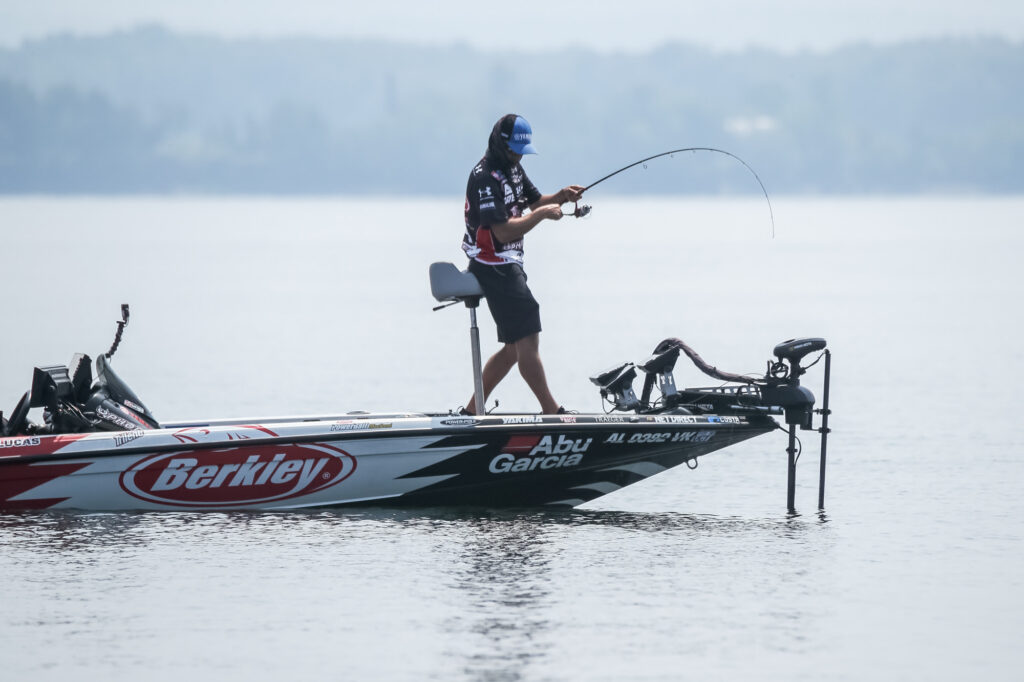 The duo traded the lead back and forth five times during Period 3, before Lucas boated a 3-pound, 13-ounce smallmouth with 60 minutes left in the round to pull away and win the two-day Qualifying Round for Group B. Lucas’ two-day total of 31 bass weighing 101 pounds, 10 ounces earned him the victory by a slim 9-ounce margin over Coulter and advances him directly into Tuesday’s final-day Championship Round of competition.

Coulter caught a two-day total of 41 bass weighing 101 pounds, 1 ounce to finish the day in second place. In third place on the SCORETRACKER® leaderboard is Academy Sports + Outdoors pro Jacob Wheeler of Harrison, Tennessee, who caught 32 bass weighing 89-14. Hot Springs, Arkansas’ Stephen Browning, who caught a two-day total of 29 bass totaling 82-13, and Polaris pro David Dudley of Lynchburg Virginia , who boated 28 bass weighing 79-6 rounded out the top five finishers in the round.

The remaining 35 anglers – 16 from Group A and 19 from Group B – will now compete Monday in the Knockout Round, where weights are zeroed, and the anglers compete to finish in the top eight to advance to Championship Wednesday. Tuesday’s Championship Round will feature Group A winner Matt Lee, Group B winner Justin Lucas, and the top eight anglers from the Knockout Round competing in a final-day shootout for the top prize of $100,000.

“That was a hard fight and was a lot of fun. I can’t believe we won it, honestly,” Lucas said in his post-game interview. “I felt like things weren’t really going our way, today, but I ended up catching more fish than the first day. And to win by just 9 ounces – that was insane.”

Like Friday, the majority of Lucas’ catch on Sunday came from drop-shotting deep-water smallmouth.

“I caught two key fish on a swimbait today, and 16 more on a Berkley (PowerBait Max Scent) Flat Worm,” Lucas said. “I worked my fricking butt off. I am beat bad, and I am really looking to a day off. I’ve got to get my stuff together, it’s a disaster right now.”

The top 19 pros from Qualifying Group A that now advance to Monday’s Knockout Round on Lake Champlain are:

Finishing in 21st through 39th in the Group B Qualifying Round were:

Kelly Jordon won Sunday’s $1,000 Berkley Big Bass Award with a 5-pound, 9-ounce bass that came on a frog during Period 1. Berkley awards $1,000 to the angler that weighs the biggest bass each day, and a $3,000 bonus to the angler who weighs the largest bass of the tournament.

The MLF Bass Pro Tour Toyota Stage Six at Lake Champlain Presented by Googan Baits is hosted by the Adirondack Coast Visitors Bureau and the City of Plattsburgh.

MLF announced earlier this week that the normal 80-angler Bass Pro Tour field would be reduced to 73 for this event, as seven anglers withdrew from competition for undisclosed reasons. After consulting with the MLF Angler Advisory Board, a slight change was made to the Qualifying Round Toro Cut Lines due to the unbalanced angler groupings.

The 34 Anglers in Group A competed in their two-day qualifying round on Lake Champlain on Thursday and Saturday – the 39 anglers in Group B on Friday and Sunday. Now that each two-day qualifying round is complete, the anglers that finish in 2nd through 17th place from Group A (50% of field) and 2nd through 20th place from Group B (50% of field) advance to Monday’s Knockout Round, while the winner of each group advances directly to Tuesday’s Championship Round. In the Knockout Round, weights are zeroed and the remaining 35 anglers compete to finish in the top 8 to advance to the Championship Round. In the final day Championship Round, weights are zeroed and the highest one-day total wins the top prize of $100,000.