HIAWASSEE, Ga. — By the time Justin Lucas made it to the stage during Sunday’s final weigh-in for the Toyota Bassmaster Angler of the Year Championship at Lake Chatuge, Georgia, the drama was all but gone. 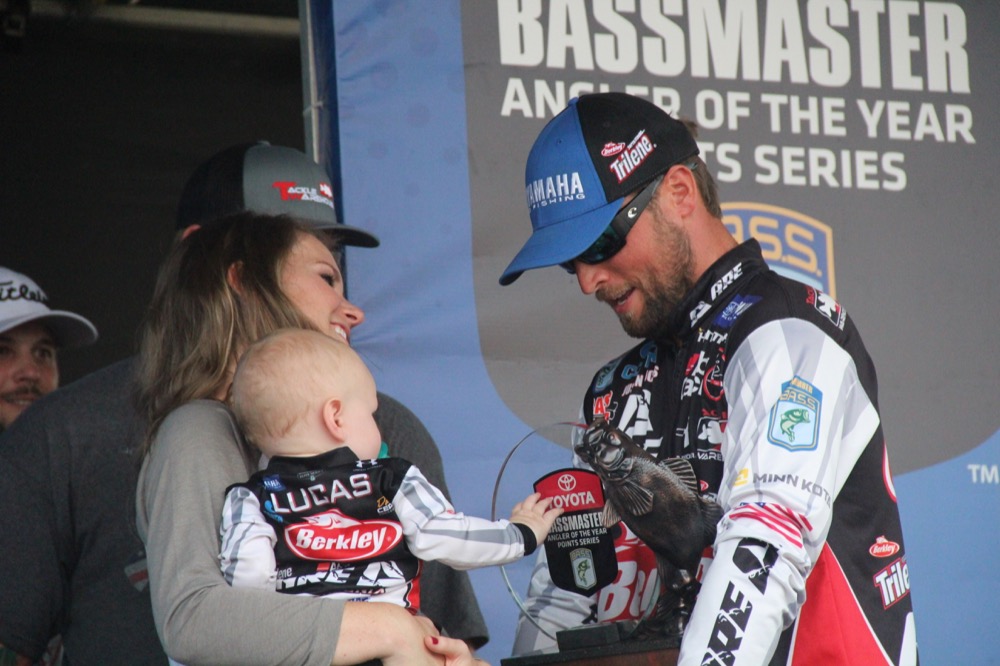 Lucas came into the event with an eight-point lead in the AOY season standings — and after solid catches on Thursday and Friday, he had stretched that lead to an almost-insurmountable 47 points. Plus, his closest competition in the race, Arizona angler Josh Bertrand, decided not to fish Sunday because his wife is expected to deliver their second child any time now back home.

It eliminated all the suspense, but that suited Lucas just fine.

The California native turned Alabama resident caught five bass that weighed only 11 pounds, 14 ounces Sunday. But his three-day weight of 39-0 was more than enough to give him the AOY title and the biggest accomplishment of his young, flourishing career.

“I wanted this so badly,” Lucas said. “The build-up to this tournament affected every part of my life. I haven’t been sleeping because I would wake up in the middle of the night thinking about my game plan for this week. I’ve told my family and friends just to bear with me for a few more days, and everything would be okay — and now it’s all good.”

The gravity of the award hit Lucas and moved him to tears on stage.

“You think about the guys who’ve won this title — Gerald Swindle, Kevin VanDam — it’s unbelievable,” he said. “I’m the 23rd guy who’s ever won this in the 50-year history of B.A.S.S., and that’s humbling.”

Lucas came into the week knowing if he finished inside the Top 8 he couldn’t lose the AOY title — even if Bertrand won the tournament. His Sunday weight helped lift him into seventh place and capped a dominant finish to his 2018 season.

The seventh-place showing marked his fifth straight Top 12 appearance in a Bassmaster Elite Series event, dating back to the regular-season tournament held on the Sabine River in Orange, Texas, in June.

“I’ve always considered myself a better prespawn, spawn and maybe a little bit of a postspawn fisherman, and then I kind of struggled after that,” Lucas said. “So I can’t explain it. This summer, I’ve just caught fire and it hasn’t slowed down.”

Lucas earned one of the most coveted trophies in professional bass fishing and a $100,000 bonus — and as icing on the cake, he caught most of his bass during the week on a new topwater lure that he helped Berkley design.

The Cane Walker, which was just released last week, is a noisy popper/walking-style topwater bait with an aerodynamic shape that is designed for long casts.

“Making long casts with that bait is key because you need to cover as much water as possible,” he said. “You can cover more water and work it over multiple brushpiles on the bottom. It brings fish up — and I think it’s already sold out at Tackle Warehouse.”

Besides the AOY title, Lucas qualified for the 2019 Bassmaster Classic presented by DICK’S Sporting Goods — his fourth time to qualify for bass fishing’s biggest event in five years on the Elite Series.

The Top 35 anglers in the final AOY standings all qualified for the event, and the next 16 in the standings will have a chance to compete for three additional Classic berths at the Mossy Oak Fishing Bassmaster Classic Bracket on Carters Lake in Ellijay, Ga., Oct. 23-26.

Though the main purpose of the event was to decide the season points winner and Classic qualifiers, the angler with the heaviest three-day weight for the week also earned $25,000 and an Elite Series trophy. That honor went to Oklahoma angler James Elam, who led every day of the tournament and finished with a three-day weight of 48-8.

Elam caught 16-10 Thursday and 16-14 Friday, and the majority of his weight came early both days. Things started slower Sunday, but his resolve led him to a five-bass limit that weighed 15-0.

“We had a full moon last night, so I think these fish woke up just a little bit late today,” said Elam, who earned his first Elite Series victory. “They finally got hungry again about 1 o’clock, and I caught four of the fish in my bag from 1 o’clock to 3.”

Elam came into the event simply wanting to improve his place in the AOY standings and secure a Classic berth. But he left with one of the bigger accomplishments of his career.

“You don’t get this opportunity very often,” he said. “I’ve been close — I’ve had it going on until the third or fourth day at several tournaments. So I’m glad to finally get it done.”

The Toyota Bassmaster Rookie of the Year award went to North Carolina pro Jake Whitaker, who finished 15th in the tournament and barely edged Arizona angler Roy Hawk for the title.

Chris Lane of Guntersville, Ala., earned the Power-Pole Captain’s Cash Award of $1,000 for being the highest-placing angler who is registered and eligible and uses a client-approved product on his boat.

Note: For a complete list of today’s standings in the 2018 Toyota Bassmaster Angler of the Year Championship, visit Bassmaster.com.