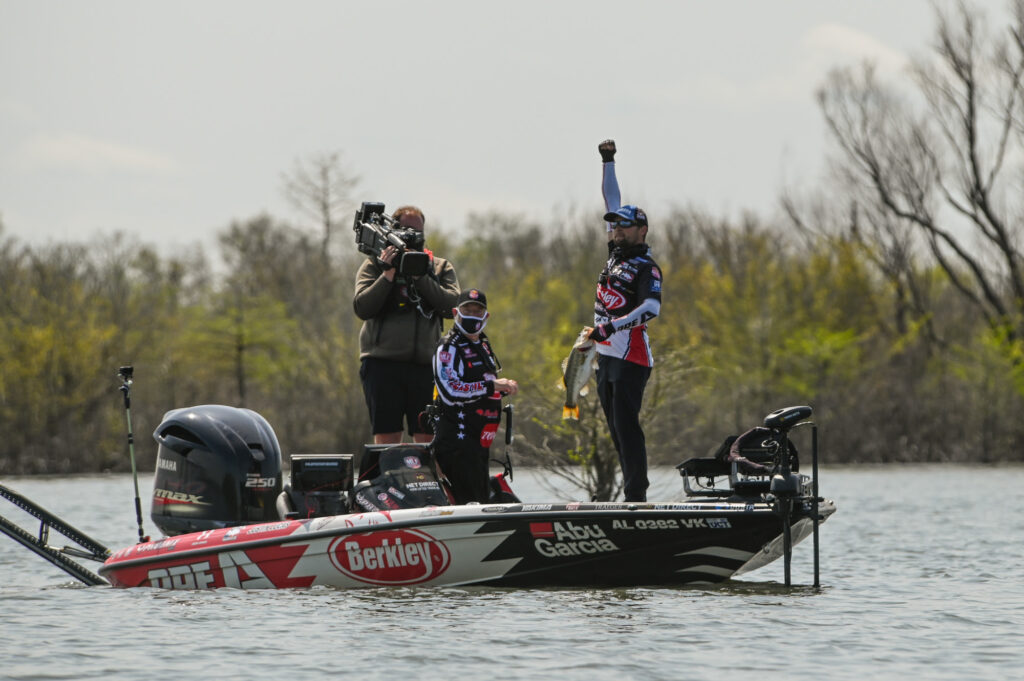 JASPER, Texas (March 25, 2021) – Berkley pro Justin Lucas of Guntersville, Alabama, had the highest single-day weight total of the entire event Thursday, catching nine bass totaling 36 pounds, 13 ounces to win the Knockout Round and advance at the Major League Fishing (MLF) Bass Pro Tour Toro Stage One at Sam Rayburn Reservoir presented by Power-Pole . The final 10 anglers are now set and competition will resume Friday morning with the Championship Round, the sixth and final day of competition. Weights are zeroed, and the angler that catches the most weight will win the top prize of $100,000.

The top eight pros from Thursday’s Knockout Round that will compete in Friday’s Championship Round on Sam Rayburn Reservoir are:

Lucas said that he took a finesse approach with a drop-shot rig, a strategy he adopted after a solid round on Wednesday.

“I was trying to force myself to catch fish on the bank and they just weren’t there,” Lucas said. “There’s millions of fish in this lake and they all aren’t on the bank. I’m finding them on big grass flats in 3 or 4 feet of water. They’re prespawn and spawning out there.”

Lucas caught the majority of his fish on the drop-shot rig, but it was a big swimbait fish he caught during Wednesday that really brought the finesse mindset to the forefront.

“When I caught that 7-14 on a swimbait on Wednesday, I knew that I needed to switch things up,” Lucas said. “I told myself to back off these fish, get away from the bank and look for areas in these flats where they can be spawning or staging. It worked out and I think I know how I’m going to attack tomorrow.”

The SCORETRACKER® provided plenty of drama for fans and anglers alike Thursday afternoon, especially for anglers trying to finish above the Toro Cut Line. Pro Mark Davis led the Qualifying Group B Round on his first day at Sam Rayburn but found himself outside the top eight with only 20 minutes remaining in the Knockout Round.

Davis was able to find some new water and brought in a crucial 6½-pound largemouth to rocket up SCORETRACKER® and into the top eight. As he took his boat out of the water and prepared himself to fish another Championship Round, Davis expressed the relief he felt after landing that bass.

“That fish meant everything to me,” Davis said. “I could only figure out one way to get a bite all day, and that was with a Carolina rig. To be able to catch that fish right there at the end and lock up a second-straight Top-10 finish was a great feeling.”

Luke Clausen was another angler who found himself outside of the top eight with time winding down. The Washington pro added a 2-14, 4-3 and 3-14 over the final two hours to lock up a spot in the Championship Round.

“I was getting really stressed because I went from third place to out of the top eight in such a hurry,” Clausen recapped. “I caught that 3-14 in the final few minutes to secure my spot and I’m glad I did because I was afraid I was going to fall out. I’m excited to get out there tomorrow and give it a shot at winning this thing.”

Shuffield won the $1,000 Berkley Big Bass Award on Thursday, catching a 6-pound, 9-ounce largemouth in Period 3. Berkley will award $1,000 to the angler that weighs the biggest bass each day, and a $3,000 bonus to the angler who weighs the largest bass of the tournament.

The MLF Bass Pro Tour Toro Stage One at Sam Rayburn Reservoir Presented by Power-Pole is hosted by the Jasper County Development District and the Jasper/Lake Sam Rayburn Chamber of Commerce.

The 40 Anglers in Group A competed in their two-day qualifying round on Sunday and Tuesday – the 40 anglers in Group B on Monday and Wednesday. After the two-day Qualifying Round, the anglers that finished in 2nd through 20th place from both groups advanced to Thursday’s Knockout Round, while the winner from each group advanced directly to Friday’s Championship Round. In the Knockout Round, the weights were zeroed and the remaining 38 anglers competed to finish in the top 8 to advance to the Championship Round. Tomorrow, in the final day Championship Round, weights are zeroed and the highest one-day total wins. Full breakdown of the format can be found at MajorLeagueFishing.com.

Attendance is limited to competing anglers, essential staff and media covering the event only. Fans are encouraged to follow the event online through the MLF NOW!® live stream and SCORETRACKER® coverage at MajorLeagueFishing.com

The 2021 Bass Pro Tour features a field of 76 of the top professional anglers in the world – joined at each event by 4 pros that qualify from the Tackle Warehouse Pro Circuit – competing across seven regular-season tournaments around the country, competing for millions of dollars and valuable points to qualify for the annual Heavy Hitters all-star event and the REDCREST 2022 championship.

The MLF NOW!® broadcast team of Chad McKee, Marty Stone and J.T. Kenney will break down the extended action each day of competition from 7:45 a.m. to 4:30 p.m. MLF NOW!®  will be live streamed on MajorLeagueFishing.com. and the MyOutdoorTV (MOTV) app.

Television coverage of the Bass Pro Tour Toro Stage One at Sam Rayburn Reservoir presented by Power-Pole will be showcased across two two-hour episodes, premiering at 7 a.m. ET, Aug. 28 on the Discovery Channel. New MLF episodes premiere each Saturday morning on the Discovery Channel, with additional re-airings on the Outdoor Channel and the Sportsman Channel. Each two-hour long reality-based episode goes in-depth to break down each day of competition.