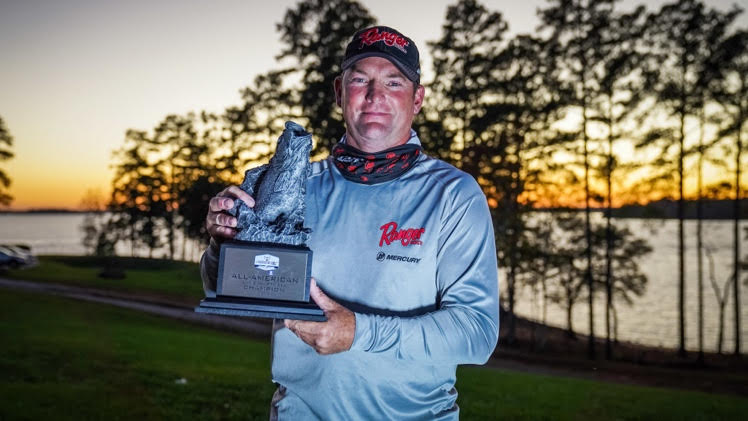 “This is unbelievable – going in to today, I really didn’t think I had a shot at it,” said Macy, who qualified for this tournament through the Bass Fishing League Ozark Division. “I went out this morning and thought that if I could catch 10 pounds, I’d be happy. When you make it to the last day, you kind of look at the payscale and you know that every spot you can hold or move up is another thousand bucks in your pocket. My goal was just to hang in there.

“I stumbled on to something around 1 o’clock this afternoon, and it absolutely went crazy from there,” Macy continued. “On the LiveScope, I would watch my swimbait come across the brush piles and if I could get the fish to follow it, I would kill it and let that swimbait go straight to the bottom. Every one of those fish would nose down on it, and as soon as I popped that swimbait up off the bottom, they would eat it every time.”

Macy said that of the 15 keepers he brought to the weigh-in stage this week, 14 of them came on a Keitech 2.8-inch swimbait in Tennessee Shad and Sexy Shad colors. He credited his electronics as being crucial to his win.

“Overall, it has just been a super three days,” Macy went on to say. “I was just so happy to be fishing on the third day of the All-American, and I knew that if I could put a big one in the bag today that anything could happen. When it’s your time, it’s your time and today was just my day.”

Complete results can be found at FLWFishing.com.

Justin Kimmel of Athens, Georgia, won the co-angler division and $50,000 Friday with a three-day total of 14 bass weighing 26 pounds, 9 ounces, followed by Larry Rothweil of Saint Charles, Missouri, in second place with 12 bass weighing 22-2, good for $10,000.

In addition to the cash payouts, the highest-finishing boater and co-angler from each of six Regional Championships, the Wild Card Championship and The Bass Federation (TBF) National Championship at the All-American now advance to the 2020 Toyota Series Championship next month on Lake Cumberland for a shot at winning $235,000 and $33,500, respectively.

The eight boaters and co-anglers that now advance to the 2020 Toyota Series Championship are: