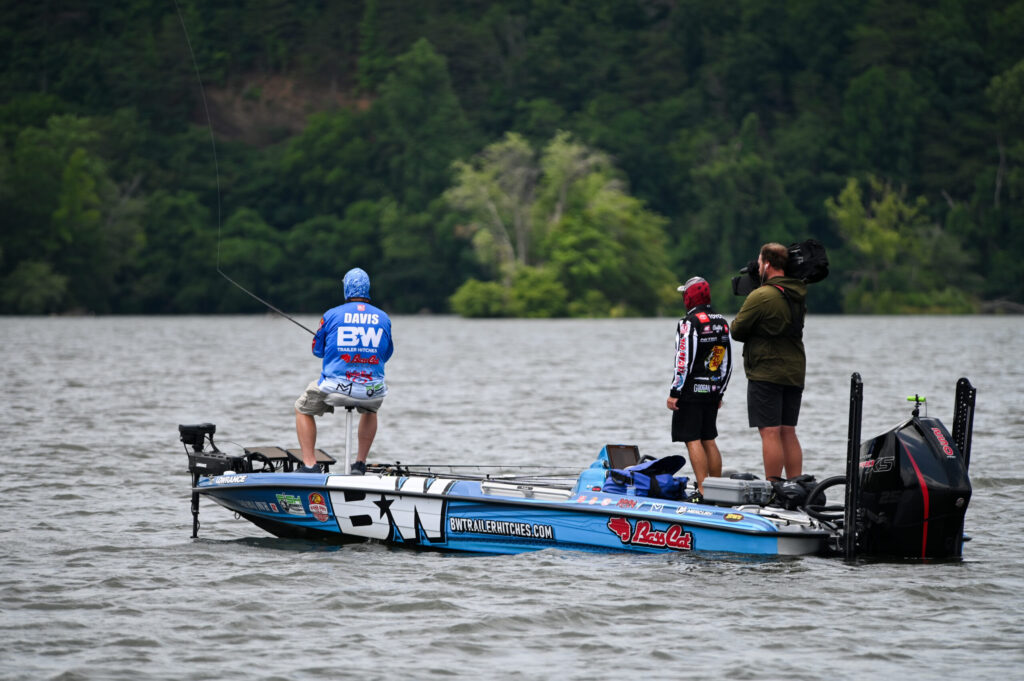 After taking over the lead mid-day, the Bass Fishing Hall of Famer and three-time Angler of the Year (AOY) winner rose to the top of a stacked field going into Thursday’s Championship Round. Among the star-studded field of pros competing in the Championship Round are fellow Bass Fishing Hall of Famer and Michigan native Kevin VanDam of Kalamazoo , who won an automatic berth to the Championship Round on Monday and boasts a staggering eight AOY awards in his astounding career, along with Forrest Wood Cup champion Randall “The Honey Badger” Tharp of Port Saint Joe, Florida , who has seven major wins and more than 30 Top-10 finishes in his career. Tharp finished in second place Wednesday, with 11 bass, weighing 23 pounds, 15 ounces.

The final 10 anglers are now set, and competition will resume Thursday morning with anglers launching at 7:30 a.m. ET in the Championship Round, where weights are zeroed, and the angler that catches the most one-day weight will win the top prize of $100,000.

The six-day event, hosted by Fish Dayton, the Rhea County Economic Tourism Council and Spring City, Tennessee, showcases 80 of the top professional bass-fishing anglers in the world competing for a total purse of $805,000.

The top eight pros from Wednesday’s Knockout Round that will compete in Thursday’s Championship Round on Watts Bar Lake are:

They’ll be joined by Qualifying Round winners:

“Man, what a great day,” Davis said. “I’ve had two bad tournaments, but I feel like I’m back on track now with my fishing.”

Davis spent most of his day fishing slowly and methodically, cranking and throwing a worm in the back of a creek on a big grass flat, targeting isolated hard cover.

“It’s been a fantastic day, fishing the way I like to fish,” Davis said. “A lot of the fish in this lake are suspended – and that was my back-up pattern for today – but I found a creek that’s about 10-foot-deep, where they aren’t suspended, and you can catch them just fishing stumps, trees and other hard cover.

“The last two days that I’ve fished this creek have been bright, bluebird skies with a little afternoon wind, and I caught a few five-pounders and a three-pounder, so I knew the bigger and better fish lived in here,” Davis continued. “I had a lot of other stuff I could hit today, but I was hoping with the cloud cover and the rain we had this morning, this place would really show out, so I got in here today and just slowed everything down.”

It was a winning technique that worked for the Arkansas pro, who bested 37 other anglers in the Knockout Round to end the day in the top spot.

“I know this creek has had a lot of pressure because it’s the prettiest creek on the lake,” Davis said. “Earlier in the week I was able to get them to eat a big, Texas-rigged worm, but today it took a drop-shot, finesse-fishing real slow to get them to bite, but we got it done.”

The 40 Anglers in Group A competed in their two-day qualifying round on Saturday and Monday – the 40 anglers in Group B on Sunday and Tuesday. After the two-day Qualifying Round, the anglers that finish in 2nd through 20th place from both groups advanced to Wednesday’s Knockout Round, while the winner of each group advanced directly to Thursday’s Championship Round. In the Knockout Round, weights were zeroed, and the remaining 38 anglers competed to finish in the top 8 to advance to the Championship Round. Tomorrow, in the final day Championship Round, weights are zeroed, and the highest one-day total wins the top prize of $100,000.

The final 10 anglers competing in Thursday’s Championship Round will launch at 7:30 a.m. ET from the Spring City Boat Ramp, located at 417 Toestring Valley Road in Spring City, Tennessee. The General Tire Takeout will be held at the ramp, beginning at 4 p.m. Fans are welcome and encouraged to attend all launch and takeout events and to follow the event online throughout the day on the MLF NOW!® live stream and SCORETRACKER® coverage at MajorLeagueFishing.com.

Also, on Championship Thursday, from 4 p.m. to 6 p.m. ET, MLF will host a Celebration Event for fans of all ages, inviting fans to come out and celebrate with the professional anglers from the Bass Pro Tour as they crown the champion of the General Tire Stage Five on Watts Bar Lake Presented by Covercraft. The FREE, family-friendly event will be fun for fishing fans of all ages. The first 50 middle school or high school anglers will receive a free Abu Garcia rod and reel combo valued at $100. The final 10 Championship Round Bass Pro Tour anglers will be on hand to meet and greet fans, sign autographs, take selfies and participate in tackle giveaways.

The General Tire Stage Five on Watts Bar Lake Presented by Covercraft features anglers competing with a 1-pound, 8-ounce minimum weight requirement for a bass to be deemed scorable. Minimum weights are determined individually for each competition waters that the Bass Pro Tour visits, based on the productivity, bass population and anticipated average size of fish in each fishery.

The MLF NOW!® broadcast team of Chad McKee, Marty Stone and J.T. Kenney will break down the extended action on all six days of competition from 7:45 a.m. to 4:30 p.m. ET. MLF NOW!® will be live streamed on MajorLeagueFishing.com and the MyOutdoorTV (MOTV) app.

Television coverage of the General Tire Stage Five on Watts Bar Lake Presented by Covercraft will premiere at 7 a.m. ET, Oct. 29 on the Discovery Channel. New MLF episodes premiere each Saturday morning on the Discovery Channel, with additional re-airings on the Outdoor Channel. Each two-hour long reality-based episode goes in-depth to break down each day of competition.