PLATTSBURGH, N.Y. (Aug. 5, 2021) – Normally on the Major League Fishing (MLF) Bass Pro Tour when an angler breaks the 100-pound mark in a single day of competition, it’s done with a large school or two of smallmouth bass. Thursday, at the Toyota Stage Six at Lake Champlain Presented by Googan Baits in Plattburgh, New York, pro Matt Lee did it with largemouth. 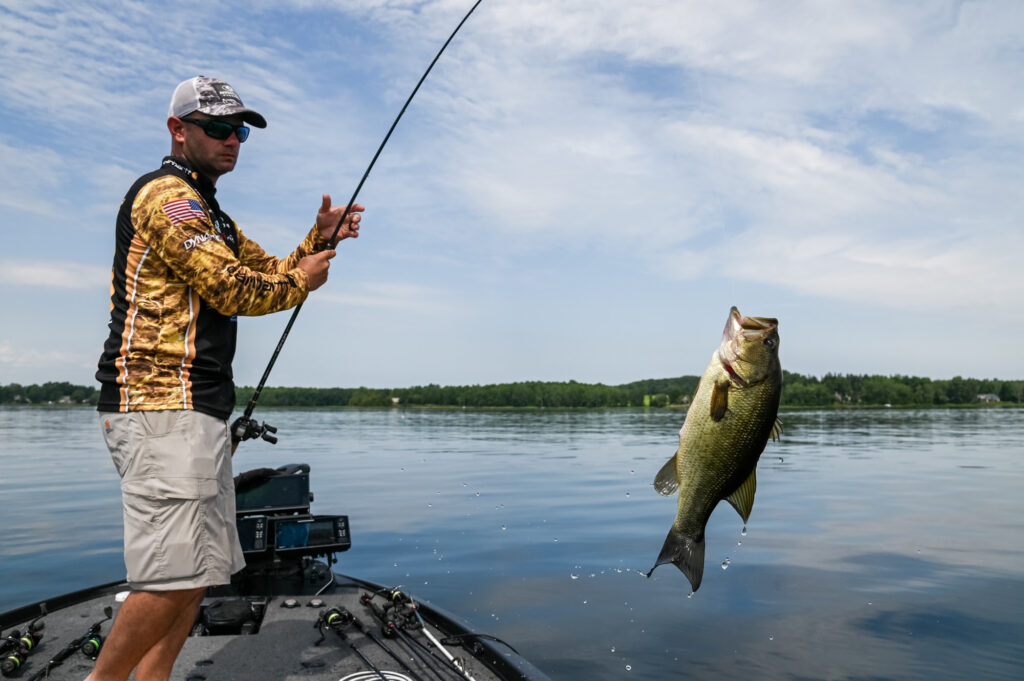 Alabama Pro Jumps out to Massive 55-Pound Group A Lead with 40 Bass Weighing 103 Pounds, 5 Ounces – Group B to Compete Friday

Lee dominated Day 1 of the Group A Qualifying Round, catching 40 bass totaling 103 pounds, 5 ounces to give him a massive 55-pound, 6-ounce lead in Group A – the largest Day 1 lead ever held in Bass Pro Tour history. The six-day event, hosted by the Adirondack Coast Visitors Bureau and the City of Plattsburgh, features the top professional anglers from around the world competing for a purse of $805,000, including a top cash prize of $100,000 to the winner.

Behind Lee, in second place, is Berkley pro John Cox of DeBary, Florida, who boated 18 bass totaling 47-15. Rounding out the top three was General Tire pro Britt Myers of Lake Wylie, South Carolina, who caught 18 bass for 45-12 to end the day in third.

“We still have a lot of derby ahead of us, but today was sick,” Lee said in his post-game interview. “I have bass hand. Not even bass thumb – bass hand. It was unreal.”

Lee said that he tried to target smallmouth early in the day, but when that plan fizzled he tried some of his largemouth areas and ran into what looks like the potential motherlode.

“I hit like four smallmouth places this morning and I could see them, but I couldn’t get them to bite,” the Cullman, Alabama pro said. “I figured they had to be biting a topwater somewhere, so I ran around to a largemouth place that I had fished before and caught a 3-10, and when I was reeling it in there were like 10 with it. So, I sat right there in that 100- to 150-foot section of grass and flipped up 100 pounds worth of bass.”

Lee said that he used just two setups on the day – his first bass came on a Lucky Craft Gunfish, and the rest came on a Texas-rigged Yamamoto Senko.

“I stayed in that same 75-yard stretch for five hours,” Lee said. “I went through some worms. The color didn’t even matter. I was just flipping hydrilla in 12- to 15-feet, and it was juice money. I had so much fun. I’ve got one more day to go to win the round and I’m just going to put the hammer down and hopefully advance straight into the Championship Round.”

Third-place angler Britt Myers chose another route to catch his 18 bass, mainly targeting smallmouth, although he did catch four largemouth as well.

“To be honest, Champlain was a little bit tougher than I thought it was going to be,” Myers said. “I thought I’d have to catch 30 pounds just to be in the hunt for the Knockout Round, but I’ve almost solidified that today. If I can catch a few more fish on Saturday, I’m very confident that I’ll make it in.

“The Duckett Baits swimbait was the key for me today – the 3.5-inch Real Thing Shad. I’ve been looking for an opportunity to use it and today when it was overcast, they really liked that swimbait. At the end of the day I also caught a few on a special little secret bait that I’ve got in my pocket for Day 2. So I’m looking forward to getting back out there.”

The top 20 pros in Group A after Day 1 on Lake Champlain are:

Overall, there were 308 bass weighing 884 pounds, 3 ounces caught by the 34 pros on Thursday.
DeFoe won Thursday’s $1,000 Berkley Big Bass Award, weighing in a 6-pound, 13-ounce largemouth bass on a worm during Period 1. Berkley will award $1,000 to the angler who weighs the biggest bass each day, and a $3,000 bonus to the angler who weighs the largest bass of the tournament.

The MLF Bass Pro Tour Toyota Stage Six at Lake Champlain Presented by Googan Baits is hosted by the Adirondack Coast Visitors Bureau and the City of Plattsburgh.

MLF announced Wednesday that the normal 80-angler Bass Pro Tour field would be reduced to 73 for this event, as seven anglers withdrew from competition for undisclosed reasons. After consulting with the MLF Angler Advisory Board, a slight change was made to the Qualifying Round Toro Cut Lines due to the unbalanced angler groupings.

The 34 Anglers in Group A compete in their two-day qualifying round on Lake Champlain on Thursday and Saturday – the 39 anglers in Group B on Friday and Sunday. After each two-day qualifying round is complete, the anglers that finish in 2nd through 17th place from Group A (50% of field) and 2nd through 20th place from Group B (50% of field) advance to Monday’s Knockout Round, while the winner of each group advances directly to Tuesday’s Championship Round. In the Knockout Round, weights are zeroed and the remaining 35 anglers compete to finish in the top 8 to advance to the Championship Round. In the final day Championship Round, weights are zeroed and the highest one-day total wins the top prize of $100,000.