September 12, 2020  by Kyle Wood The dock talk all week at the Potomac River for the Toyota Series Eastern Division event was that fishing was tough. That rang true again today as the wind help stall the tide making things tough for most of the top 10. James Maupin, however, kept his streak of consistency alive as he weighed his third 13-pound-plus limit of the week to move from second to first with 40 pounds, 11 ounces overall. For the win, Maupin earns his first FLW trophy and over $24,000. 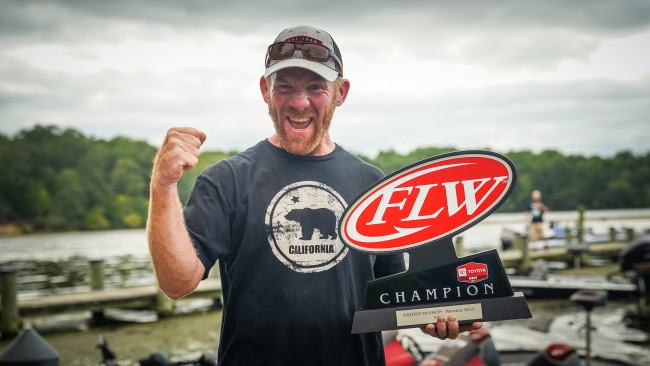 Maupin was ecstatic just to make a top 10 in a field with Potomac hammers like this event featured, but to win was even more special.

“This means a lot,” Maupin says. “This makes all the hard work worth it to know I can compete with these guys.”

It’s no joke when Maupin talks about the hard work he puts into fishing a whole, but especially for this tournament.

“I got a top 10 in the Northeast Division for the [Phoenix Bass Fishing League presented by T-H Marine] a couple weeks ago,” Maupin says. “But other than that, I have been at the bottom of the pack on this river every other tournament. The last six months I’ve been putting a lot of time in here and it’s paying off.”

Maupin also gives the nod to his buddy, Derek Brown, for helping him figure out the Potomac puzzle.

“He’s a stick up here,” Maupin says of Brown. “He actually fishes as a co-angler, but he should be doing it as a boater. Me and him practice fished up here for months and caught fish all over the river, but we got on to where the bigger fish were. The bigger fish are definitely concentrated in certain areas.”

The two areas Maupin spent the majority of his time on this week were Greenway Flats and Mason Neck. Each area had a 200-yard stretch that he would work back and forth no matter the tide and each produced fish throughout the day.

“I’m not too familiar with tides, so I just put my head down and fished,” says the 42-year-old angler. “I just got on this bite Wednesday and it was just so consistent. The main thing that made it consistent was that it was cloudy. When that sun would peek out I couldn’t get a bite going, but I could throw that spinnerbait down those grass lines when it was cloudy and it was cloudy all three days.”

The bread and butter for Maupin was a 3/8-ounce Terminator spinnerbait with two gold willow blades. He had two identical spinnerbaits rigged on the deck, one on 15-pound-test fluorocarbon and the other on 20-pound-test to help the bait run lower or higher in the water. When the sun poked out, especially on day two, Maupin ran a V&M swim jig with a Zoom Fat Albert Twin Tail Grub as a trailer to get a few bites.

Maupin has been fishing since he was in diapers, so the win this week means everything to him. It means even more knowing his grandmother, Christine, was looking down on him today.

“She was wonderful, she was the fisherwoman of the family and taught me how to fish,” Maupin says. “She’d call big ones ‘Mary Alice,’ so all day long I was praying to granny saying, ‘c’mon granny, just give me two Mary Alice’s.’ And nearly every time I’d say that prayer and go back down a stretch I’d catch a nice one. So I think granny was riding in the boat with me this week.”

As a brick mason by day, Maupin is more than happy to see fish pay the bills for a change. Though he may not be ready to dive into fishing full-time, he’s ready to keep competing at this level.

“If I could do this a lot more often I’d like to not lay bricks,” jokes Maupin. “But this seriously is one of the greatest moments of my life. It’s just amazing. The check that I got I’m going to use that to pay my house off, so it’s cool to say I did that with fishing. I’m not sure what I’m going to fish next year, but I definitely want to keep it going.”