McCormick Makes History and Heads Back To Classic

Back in July we published a story with Tristan McCormick titled, “Making Memories and Building Momentum” focused mostly on a boat-deck engagement to his longtime sweetheart, Elle. We also touched on the fact that since proposing, his tournament finishes seemed to drastically improve. We’re now knocking on November’s door and McCormick’s continued to build momentum and make some history since popping the question. 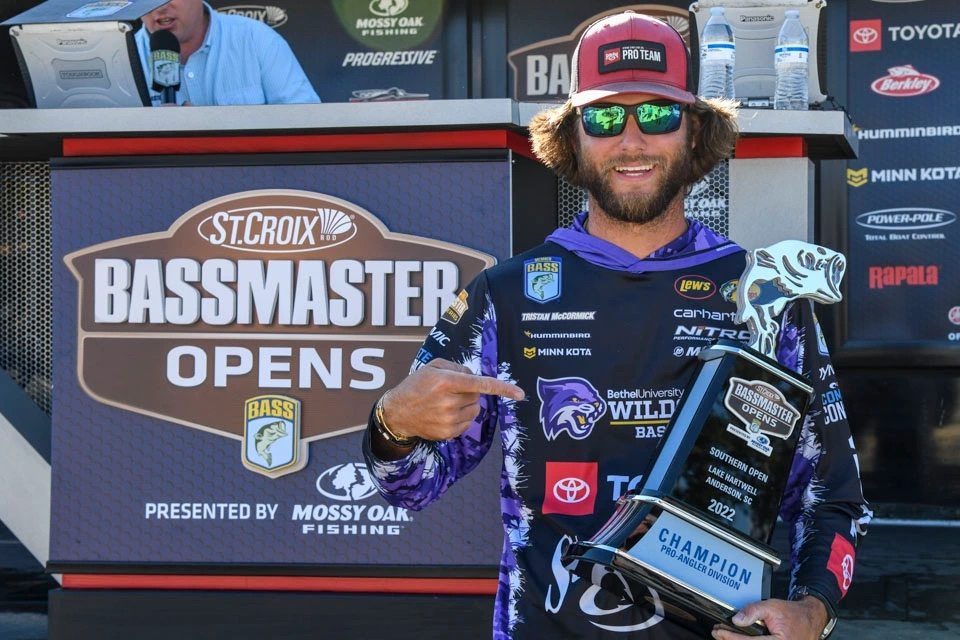 The 2021 College Series Bracket Champion became the first person to win a Bassmaster Open and re-qualify for the following year’s Bassmaster Classic while participating in the Bracket Champion program. You get a sense of how special this is when you consider the names of some of the former College Bracket Champions. Anglers like Andrew Upshaw, Matt Lee, Jordan Lee, Cody Huff, Brett Pruette, and Jacob Foutz just to name a few.

“To know I’m the first college champion to ever win an Open is truly humbling considering some of the guys who’ve come up through this program,” McCormick said. “I really didn’t think I had enough to win on that final day, it was about the last thing I expected. It’s something I’ll never forget and will be a moment me and my family remember forever.”

McCormick has taken full advantage of his year as the Bassmaster College Series Bracket Champion. He’s put nearly 40,000 miles on his loaned 2022 Toyota Tundra and has been in his Bethel University wrapped Nitro at every opportunity along the way. He closed his 2022 Bassmaster Opens season out with a win on Hartwell and followed with a 4th place finish on Sam Rayburn last weekend, ending the year as one of the hottest anglers in bass fishing.

The Bethel graduate also found time to fish the northern division of the MajorLeagueFishing Toyota Series and thanks to another top 10 finish on the St. Lawrence River back in August, he was able to qualify for the 2023 MLF Invitationals. Achieving a lifelong dream of qualifying to compete as a professional angler. Looking at the ups and downs of his season you can’t help but wonder, what changed?

“I cared too much about points at the beginning of the year,” McCormick explained. “I was so scared of messing up the opportunity I had as the Bracket Champion that I tried to shoot par, and that just didn’t work for me. Midway through the season, I knew I couldn’t qualify for the 2023 Elite Series, so I started fishing differently. I trusted my instincts and started fishing to win. Not being afraid to fish new water during the tournament and avoiding getting caught up with what I did in practice.”

McCormick also credits getting dialed in with his equipment, specifically electronics and some new offerings from Strike King like the Filler Worm, for his last two stellar finishes on the Bassmaster Opens. Like many young pros, McCormick is extremely skilled with forward-facing-sonar and other recent advancements in technology on the water.

College fishing continues to give young anglers a PHD’s worth of tournament experience as more and more recent graduates establish themselves at the Opens level and beyond. McCormick wasn’t the only former college fishing standout in the top 10 at the last two Opens. Former College Bracket champ John Garrett finished 6th at Lake Hartwell, and 2021’s college Classic Bracket winner Trevor McKinney posted a 10th place finish at Rayburn.

McCormick’s recent Opens win and seeing so many familiar names near the top of leaderboards will only further inspire today’s crop of college fishermen. When asked what advice he’d give to next year’s Classic Bracket champion Louis Monetti, McCormick had this to say.

“Trust what brought you to the dance and don’t be anything but yourself,” McCormick said. “Don’t get so caught up worrying about next year that you don’t focus on this year. Every time you launch your boat, just take it one day at a time… enjoy the heck out of the experience!”