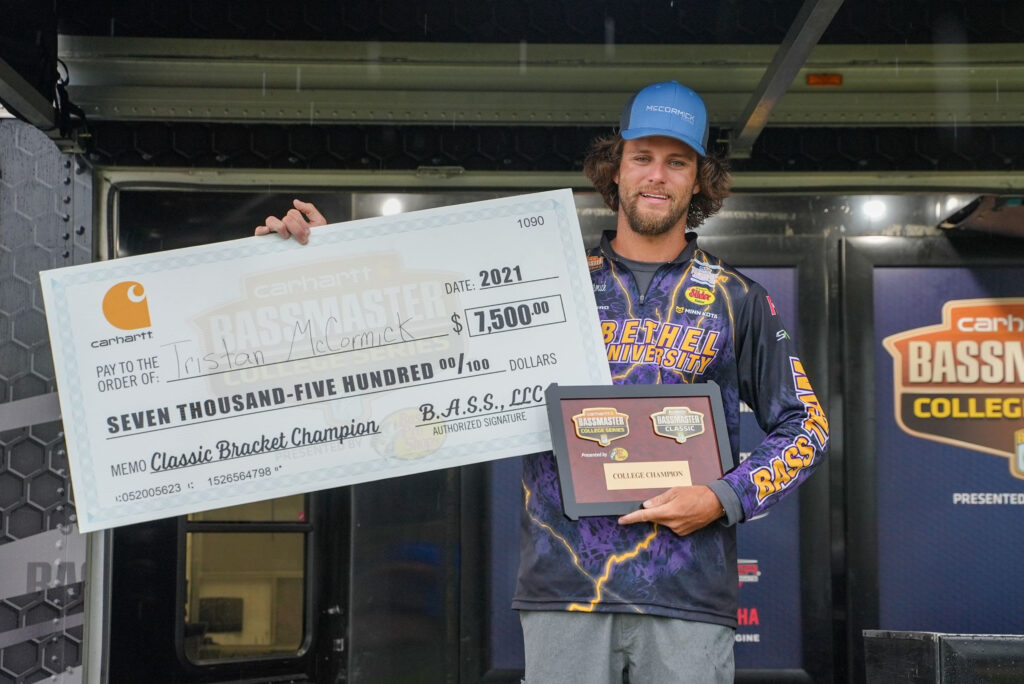 To make matters worse, he watched his opponent Tucker Smith of Auburn University catch over 9 pounds of bass under Bouldin Dam before the 10:45 a.m. halftime break.

But despite the morning deficit, McCormick managed an early-afternoon flurry that saw him cull four times with several 2-pound bass for an 11-pound total weight that earned him the victory by 3 ounces. McCormick earned one of the most coveted prizes in bass fishing — a berth in the 2022 Academy Sports + Outdoors Bassmaster Classic presented by Huk scheduled for March 4-6 at Lake Hartwell.

“It hasn’t sunk in and it won’t for a while,” said McCormick, who also earned $7,500, paid entry fees into all 2022 Basspro.com Bassmaster Opens and the use of a fully-rigged Nitro Z20 and Toyota Tundra. “It’s such a blessing. I’m so fortunate and I’ve worked so hard for so many years just trying to get to this moment and I’ve finally got it. That means a lot to me.”

McCormick secured the overall No. 1 seed during the qualifying day by catching 10-9. He then won his first-round matchup against Hayden Scott with 9-9 and advanced to the final round over Conner Crosby with 10-14.

The final-day total he used to slip by Smith was the biggest bag of the event.

For much of the tournament, McCormick and Smith were within sight of each other fishing the tailrace under Bouldin Dam. They focused on current seams in the water moving from Jordan Lake into a diversion canal and on into the Coosa River.

McCormick caught the majority of his bass in that area on a specific current seam using a topwater walking bait, a drop shot with a 1/2-ounce weight and a pink Roboworm and a couple of fish on a smaller-profile swimbait.

With storms and a cold front moving through the area the past couple of days, the water had risen in the tailrace to the point where McCormick had to make very precise casts to get bites.

“I had that one seam I caught everything off of this afternoon,” McCormick said. “If that seam had a lot of current, it kind of backwashed into the seam. Today, there was just a little bitty area that you could throw it where slack water was, and every fish I caught on that drop shot, as soon as I threw it in there, that’s when they had it.”

Finding bass that weighed over 3 pounds had been the key to success for both anglers over the course of the week — and early on Championship Monday, Smith landed a 3-12 largemouth. Within 20 minutes of arriving at his primary area, he landed four keepers.

After a lull of about an hour, Smith landed his fifth bass and made several important culls before the halftime break. McCormick, meanwhile, filled his limit throughout the morning but watched as several quality fish missed his topwater bait and as one close to 3 pounds pulled off the hook.

As Smith continued to catch fish in the tailrace, McCormick exited the area before halftime.

“I saw a bunch of big ones this morning missing my Spook and I just had a gut feeling to go back. I put my hat down real low to where he was out of my vision and focused on what I was doing,” McCormick said. “I knew I had to catch up and knew the only way to do it was to go back up there around a big population of fish and grind it out the rest of the day.”

“I wasn’t 10 casts in when I hooked that first largemouth,” McCormick said. “I threw back in there and caught a really big largemouth. After all of the pressure from the storms and everything the last two days, they settled down and they fed this morning a lot.

“That was the most activity I’ve seen all week up there. I knew they were feeding heavy and I stuck with what was best for me to catch them.”

Heavy storms moved into the area with 40 minutes to go, delaying the event until late afternoon. With a 1-8 bass still in his bag, McCormick thought he needed to cull one more time to seal the deal.

“I felt like I needed 12 pounds and I was a pound short of that goal,” he said. “If I could have just hooked one of those Spook fish this morning we would be golden. I caught all that weight in a 30- to 45-minute window and felt like it was happening. When we went under the bridge (to take cover) it hit me.

“I was thinking, ‘Gosh, I needed one more bite and we can do this.’”

With the win, McCormick became the third Bethel University angler to win the Bracket and advance to the Bassmaster Classic. Cole Floyd and Cody Huff were the first two to accomplish that feat.

The City of Wetumpka hosted the tournament.