DAYTON, Tenn. (May 4, 2019) – FLW Tour rookie Ron Nelson of Berrien Springs, Michigan, caught four big largemouth late in the day Saturday to anchor his 25-pound, 15-ounce limit and jump to the top of the leaderboard after Day Three of the FLW Tour at Lake Chickamauga presented by Evinrude in Dayton, Tennessee. Nelson’s five-bass limit was one of just four brought to the scale Saturday that weighed in excess of 20 pounds, telling when you consider that the lake had pumped out 19, 20+ pound limits in the first two days of competition. 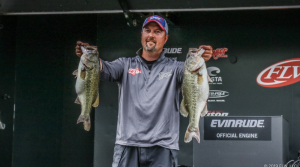 “I feel honored to be here,” said Nelson, who, although a Tour rookie, has three career tournament wins in Costa FLW Series competition. “I had no idea that I had 25 pounds. I had a real slow day and just stuck with it and stuck with it and it started snowballing real quick at the end of the day.

Nelson’s four late-in-the-day largemouth came from similar water, but his last kicker came on a different bait. Nelson declined to mention any specifics, but did say that he was catching fish on “a couple of different baits.”

“I’m excited, but I don’t want to get too far ahead of myself,” Nelson said. “Yesterday I dropped the ball and only had 14 pounds. I just don’t know what will happen tomorrow. I may go out and catch 12 pounds, or I could catch 35. I’m just going to keep an open mind and work hard all day. I’ll be looking for a big bag tomorrow.”

The top 10 pros advancing to the final day of competition Sunday on Lake Chickamauga are:

Finishing in 11th through 30th are:

Full results for the entire field can be found at FLWFishing.com.

Overall there were 145 bass weighing 462 pounds, 2 ounces, caught by pros Saturday. Of the final 30 pros, 27 of them were able to bring a five-bass limit to the scale.

In FLW Tour competition, the full field of 165 pro anglers competed in the two-day opening round Thursday and Friday. The top 30 pros based on their two-day accumulated weight advanced to fish on Saturday. Now, only the top 10 pros continue competition Sunday, with the winner determined by the heaviest accumulated weight from the four days of competition.

The total purse for the FLW Tour at Lake Chickamauga presented by Evinrude is more than $860,000. The tournament is hosted by Fish Dayton and the Rhea Economic Tourism Council.

Throughout the season, anglers are also vying for valuable points in hopes of qualifying for the 2019 FLW Cup, the world championship of professional bass fishing. The 2019 FLW Cup will be on Lake Hamilton in Hot Springs, Arkansas, Aug. 9-11 and is hosted by the Arkansas Department of Parks and Tourism and Visit Hot Springs.

In conjunction with the weigh-ins, FLW will host a free Family Fishing Expo at the Dayton Boat Dock from 2 to 6 p.m. Sunday. The Expo is a chance for fishing fans to meet their favorite anglers, enjoy interactive games, activities and giveaways provided by FLW sponsors, and learn more about the sport of fishing and other outdoor activities.

Television coverage of the FLW Tour at Lake Chickamauga presented by Evinrude will premiere in 2019. The Emmy-nominated “FLW” television show airs each Saturday night at 7 p.m. EST and is broadcast to more than 63 million cable, satellite and telecommunications households in the U.S., Canada and the Caribbean on the World Fishing Network (WFN), the leading entertainment destination and digital resource for anglers throughout North America. FLW television is also distributed internationally to FLW partner countries, including Canada, China, Italy, Korea, Mexico, Portugal, Spain and South Africa.

The popular FLW Live on-the-water program will air Sunday, featuring live action from the boats of the tournament’s top pros each day. Host Travis Moran will be joined by FLW Tour veteran Peter Thliveros to break down the extended action from 8 a.m. to 2 p.m. On-the-water broadcasts will be live streamed on FLWFishing.com, the FLW YouTube channel and the FLW Facebook page.

FLW is the world’s largest tournament-fishing organization, providing anglers of all skill levels the opportunity to compete for millions in prize money in 2019 across five tournament circuits. Headquartered in Benton, Kentucky, with offices in Minneapolis, FLW and their partners conduct more than 290 bass-fishing tournaments annually around the world, including the United States, Canada, China, Italy, South Korea, Mexico, Portugal, South Africa and Spain. FLW tournament fishing can be seen on the Emmy-nominated “FLW” television show while FLW Bass Fishing magazine delivers cutting-edge tips from top pros. For more information visit FLWFishing.com and follow FLW at Facebook, Twitter, Instagram and YouTube.