LA CROSSE, Wis. (Aug. 17, 2021) – The Major League Fishing (MLF) Tackle Warehouse TITLE Presented by Mercury – the Pro Circuit Championship, Presented by Bad Boy Mowers – kicked off Tuesday with a grueling day on the water for the anglers. Pro Mike McClelland of Blue Eye, Missouri stayed near the top of the unofficial leaderboard throughout the day, securing his position in the top spot at the end of Day 1, with a limit of 13 pounds, 12 ounces – a mere 2 ounces ahead of pro Alex Davis of Albertville, Alabama, who weighed 13 pounds, 10 ounces to finish the day in second place. 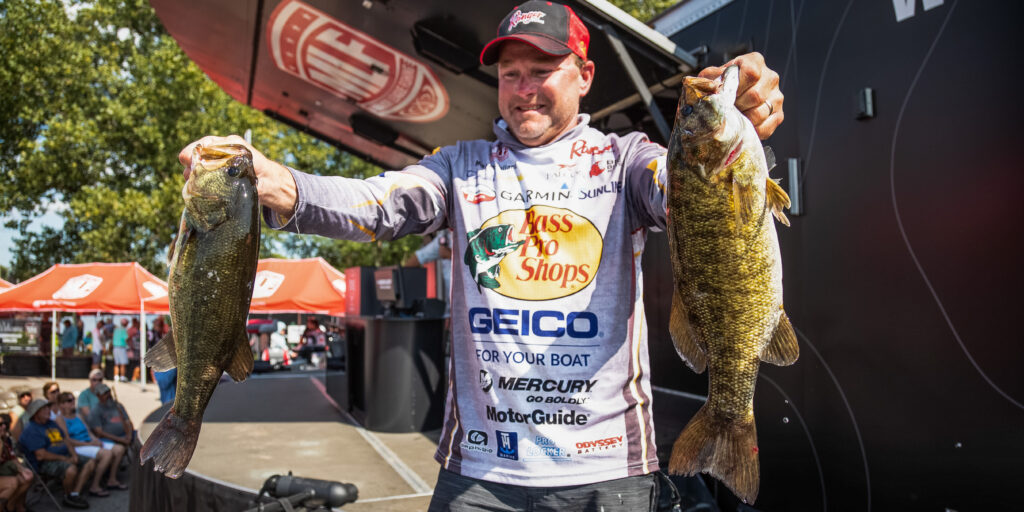 The six-day tournament, hosted by Explore La Crosse, showcases the top 48 pros in the 2021 Pro Circuit standings, along with last year’s reigning TITLE champion and reigning Angler of the Year – all competing for a purse of nearly $900,000 and a grand prize of up to $235,000.

With several anglers separated by mere ounces, the championship event is setting up nicely to feature some dramatic strategic decision-making, despite the unprecedented low-water levels on the Mighty Miss.

“Having past experience here on the Mississippi River definitely helped me today,” said McClelland. “The fortunate part is that I’ve actually fished here when the river was down. Every time we showed up here for a tournament in the past, a massive flood would hit, so nothing I had done in practice would work.

“This week as we got to town, they’d had localized heavy flooding and the river had risen 1½ to 2 feet, muddying the water and messing up some areas. It forced me to go look at some spots that I had found over the years where I knew the river could be hot when the water level was down.”

McClelland said he had never got to fish those areas during an actual tournament due to the rapidly changing conditions on the Mississippi, but those spots were his saving grace today.

“Today I was able to settle in,” said McClelland. “I caught a big largemouth right off the bat and caught a couple smallmouth shortly after. That allowed me to learn exactly how these fish were positioned and once I figured that out, it really took off.

“It was pretty incredible the number of bites I got today. I just hope I didn’t lean on them too hard, and that they don’t get hammered tomorrow. Hopefully when I get back there on Thursday, they will still be ready to bite.”

McClelland said he’s had his fair share of ups and downs over the past couple years and admitted his success on the Bass Pro Tour had not been astounding, but he feels like this event could be different.

“The grinders are the tournaments I typically do better in,” McClelland said. “I feel like I have a chance at this event, where a lot of guys were probably coming in not really knowing how many fish truly live in some of these areas. I knew they might lay off thinking they’ve caught them all, but I’ve seen places on this river where you can literally catch 25 or 30 2½- to 3-pounders when it’s good.”

McClelland said he probably had an opportunity to upgrade another pound or so, but I didn’t want to lean too heavy on the fish on Day 1.

“The key for me this week has really been being open-minded,” said the Missouri pro. “Typically, this place has been so well-known for a swim jig – not necessarily a big, bulky swim jig, but more of a finesse-style swim jig. For me this week, the swim jig has caught a few – it caught the better largemouth today – but I’m actually throwing a 3.3-inch Big Bite Baits Pro Swimmer.

“I found the fish that would normally bite a swim jig were pushing it, but they would hit the swimmer, so I feel like I’ve got a little trick up my sleeve. I’ve got a little bit of topwater activity, some [SPRO] RKCrawler activity and am throwing a little brown jig like we do in the Ozarks.

“I mixed it up quite a bit today and feel like I’ve got a lot of things working – I’m really looking forward to Thursday,” concluded McClelland.

The standings for the 25 pros in Group A after Day 1 on the Mississippi River are:

Overall, there were 108 bass weighing 248 pounds even caught by the 25 pros on Tuesday, with 16 five-bass limits.

The MLF Tackle Warehouse TITLE Presented by Mercury – the Pro Circuit Championship, Presented by Bad Boy Mowers features a hybrid tournament format. All 50 anglers are seeded into two groups of 25 – Group A & Group B, based on points earned in 2021 qualifying events – where they will compete in Qualifying Rounds over the first four days of the tournament. Group A will fish again on Day 3, and Group B will fish Day 2 and Day 4, with total weight determined by the cumulative weight of their biggest five-bass limit from both days.

The first 100 kids (10 and under) will receive a free rod and reel at the Expo on Saturday and Sunday and fans can register for a Jackson Kayak Coosa FD giveaway once per day, onsite at the Expo. The winner will be drawn after the final weigh-in on August 22. PAW Patrol’s Skye and Marshall will also be at the event with MLF pro Charlie Evans and will be available for photos. Appearance times may vary. Visit MajorLeagueFishing.com for updates and more details.