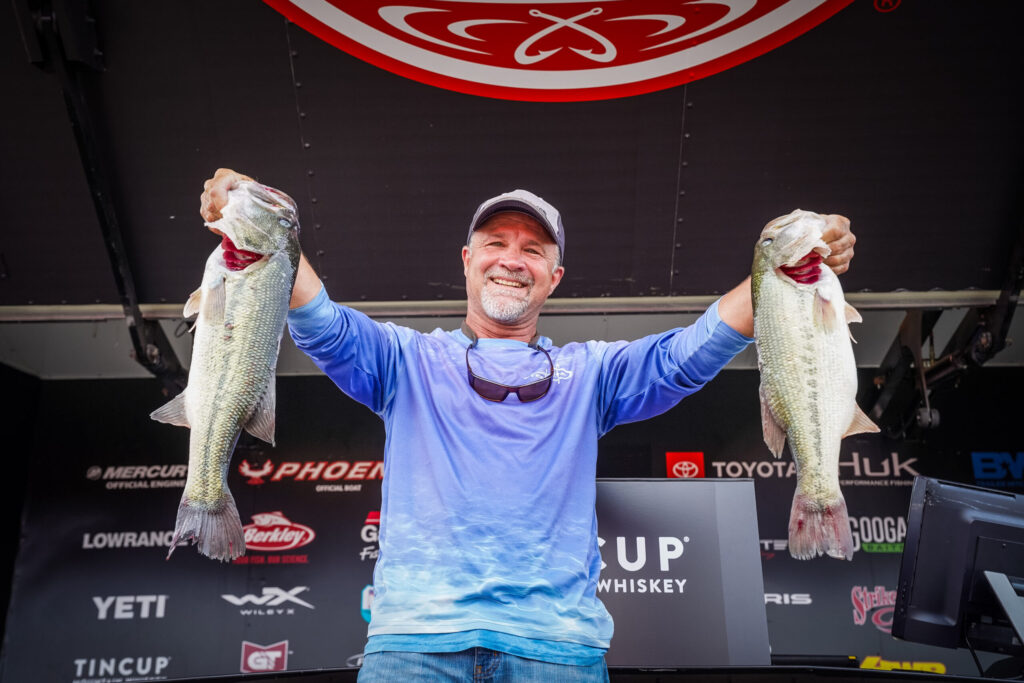 Brandenburg said that he spent the majority of the day fishing the upper end of the lake, in the river, flipping a jig to a countless number of bushes.

“I’ve only been here one other time – I was a co-angler, and we went up that river and I won a check that time,” said Brandenburg, who is fishing in his 18th career event as a boater in MLF competition. “Sometimes, it just works out and maybe it’s God’s plan. I hope. We’ll know tomorrow. You dang sure can’t win it the first day but you can lose it. Hopefully I can turn this good start into a Top 10.”

One advantage that Brandenburg has this week is his custom-designed boat, made for getting into places that others can’t.

“I brought a boat that I built. It’s an aluminum Xpress. It’s got a hydraulic jack plate, and I built it purposely to get to places where other people can’t go. It’s a rugged old boat and I’m not afraid to tear it up to go catch them,” Brandenburg said. “I’ve got a lot more places to fish, and I think I’ve got enough to carry me through.”

With sunnier conditions being forecast for Friday, Brandenburg is realistic about his chances of weighing in another big bag but said that he does like his chances in what could be a tough day of fishing.

The top 10 boaters after day one on Douglas Lake are:

Complete results can be found at MajorLeagueFishing.com.

All-American competitors will take off from the Dandridge Boat Dock, located at 100 Public Drive in Dandridge, at 7 a.m. ET each morning, June 3-5. Weigh-in will also be held at the dock at 3:30 p.m. daily. Fans are welcome to attend or follow the event online through daily coverage, live blogs and photos at MajorLeagueFishing.com.

Live weigh-in coverage will be streamed daily on MajorLeagueFishing.com. Television coverage of the 2021 Phoenix Bass Fishing League Presented by T-H Marine All-American at Douglas Lake Presented by TINCUP will premiere on the Sportsman Channel Sept. 29, 2021, and on the Outdoor Channel on Oct. 3, 2021.

Additionally, the highest-finishing boater and Strike King co-angler from each of seven Regional Championships (including the Wild Card) and the TBF National Championship at the All-American will advance to the 2021 Toyota Series Championship for a shot at winning $235,000 and $33,500, respectively.

The full field of anglers compete on Thursday and Friday, with only the top 10 boaters and top 10 co-anglers based on cumulative weight from the first two days continuing to Championship Saturday. The 2021 All-American champions will be determined by the heaviest three-day total weight.