LA CROSSE, Wis. (Aug. 21, 2021) – Pro Mitch Crane of Columbus, Mississippi brought a five-bass limit to the stage Saturday weighing 15 pounds, 15 ounces to win the Knockout Round and advance to the final day of competition at the Major League Fishing (MLF) Tackle Warehouse TITLE Presented by Mercury – the Pro Circuit Championship, Presented by Bad Boy Mowers. The final 10 anglers are now set, and competition will resume Sunday morning with the Championship Round, where weights are zeroed, and the winner will be determined by the heaviest five-bass limit of the final round. 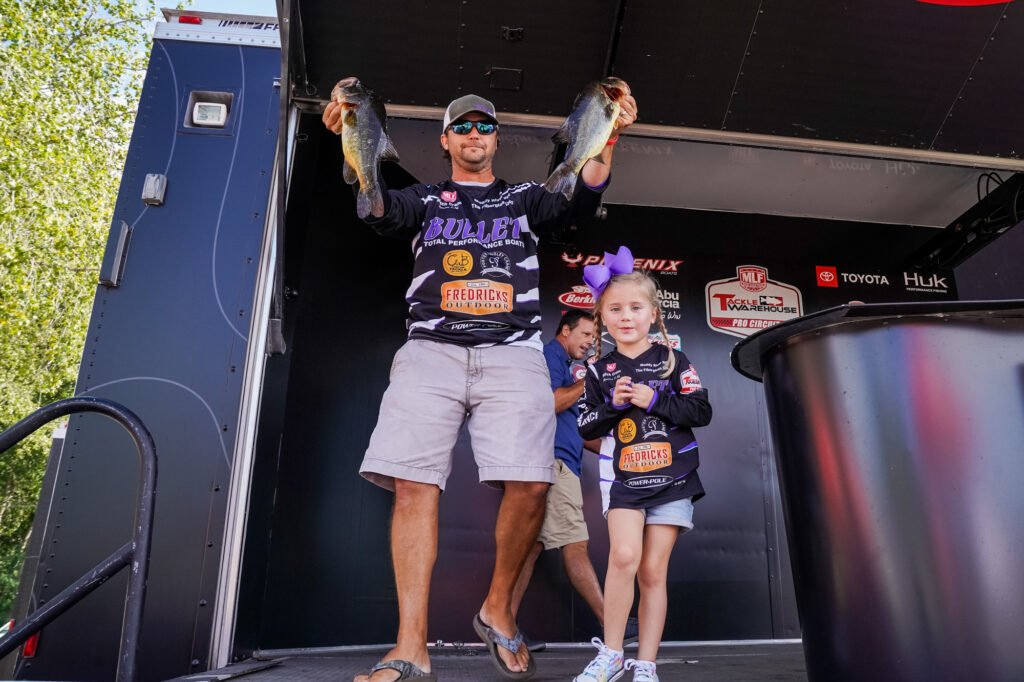 Only the top 10 anglers will move on in the competition. The Championship Round on Sunday will feature Group A winner Miles Burghoff of Soddy-Daisy, Tennessee, Group B winner Adrian Avena of Vineland, New Jersey and the top eight anglers from the Knockout Round, competing in a final-day shootout for a top prize of up to $235,000. The six-day event, hosted by Explore La Crosse, features the top 48 pros in the 2021 Pro Circuit standings, along with last year’s reigning TITLE champion and reigning Angler of the Year – all competing for a purse of nearly $900,000

The top eight pros from Saturday’s Knockout Round that will compete in Sunday’s Championship Round on the Mississippi River are:

“I really enjoy this place and feel like I can read it very well,” said Crane. “I’ve got a great area and I’m just trying to baby it to get what I need and get out. It was best-case scenario today. I’m happy with it, but I just hope I didn’t win the wrong day today.

“There are some deeper stretches on this ½-mile area that I’m at,” continued Crane, who just wrapped up his second year on the Tackle Warehouse Pro Circuit Presented by Bad Boy Mowers. “I’ve been trying to pick one spot and stay there, but if the grass gets too choked out underneath the lily pads it’s not good. You want clear water, open canopy and lily pads – that’s been the key. And bait, but there’s bait everywhere on the Mississippi River.”

Crane said the spot he’s been fishing the first two days is just the edge of the area where he believes the big bass reside.

“I’ve just been pulling up to one little corner and catching them on the corner and leaving. But in practice I didn’t spend 5 minutes in that area before I caught a good one, then shook a giant off. I’m ready to dive off in there. I’m tired of looking at it. They may not be there, but they were in practice.”

With weights zeroing again tomorrow, this could be the best opportunity for Crane to get his first major win.

“Getting [the win] would be unbelievable,” said Crane. “It’d be life-changing. I haven’t won a big tournament since the 2016 BFL and I’m ready to win again. I knew if I could just get [to the TITLE], I could have a good finish.

“Not only would that level of win validate my early career, but I’m just ready to get out there and stick a few,” said Crane.

Rounding out the top 20 finishers were:

Overall, there were 79 bass weighing 202 pounds, 5 ounces caught by the 18 pros on Saturday with 14 five-bass limits.

The MLF Tackle Warehouse TITLE Presented by Mercury – the Pro Circuit Championship, Presented by Bad Boy Mowers features a hybrid tournament format. All 50 anglers were seeded into two groups of 25 – Group A & Group B, based on points earned in 2021 qualifying events – where they competed in Qualifying Rounds over the first four days of the tournament.

The 25 anglers in Group A competed in their two-day qualifying round on the Mighty Miss on Tuesday and Thursday – the 25 anglers in Group B on Wednesday and Friday. After each group’s two-day Qualifying Round, the anglers that finished in 2nd through 10th place from both Group A and Group B advanced to Saturday’s Knockout Round. In the Knockout Round, weights were zeroed and the remaining 18 anglers (nine anglers from Group A, and nine anglers from Group B) competed to finish in the top 8 to advance to the Championship Round. Tomorrow, in the final day Championship Round, weights are again zeroed, and the winner will be determined by the heaviest five-bass limit of the final round.

Anglers will take off at 7 a.m. CT on Sunday from Veterans Freedom Park, located at 1 Clinton Street in La Crosse. The final event weigh-in will also be held at the park Sunday at 3 p.m., followed by the TITLE belt presentation. The MLF NOW! broadcast team of Chad McKee, Marty Stone and J.T. Kenney will break down the extended action from 7:30 a.m. to 2:30 p.m. on Sunday. Fans are welcome to attend the event or follow the action online through the MLF NOW! live stream and coverage at MajorLeagueFishing.com.

Along with the launch and weigh-in, fans and community members are invited to a Fishing and Outdoor Expo Sunday, August 21from 11 a.m. to 4 p.m. CT at Veterans Freedom Park, where fans can meet the pros and check out the latest in fishing and outdoor gear. The expo includes live music, great food, vendor booths from participating sponsors, activities for kids, giveaways and more.

The first 100 kids (10 and under) will receive a free rod and reel at the Expo on Sunday and fans can register for a Jackson Kayak Coosa FD giveaway once per day, onsite. The winner will be drawn following the weigh-in on Sunday. PAW Patrol’s Skye and Marshall will also be at the event with MLF pro Charlie Evans and will be available for photos. Appearance times may vary. Visit MajorLeagueFishing.com for updates and more details.