Delaware Pro Weighs Biggest Bag of the Event to Win Knockout Round, Final 10 Anglers Set for Sunday’s Championship Shootout to Compete for up to $235,000

MASSENA, N.Y. (Aug. 20, 2022) – After an absolute slugfest, with 13 out of 18 anglers weighing in bags over 20 pounds, pro Kurt Mitchell of Milford, Delaware, brought a five-bass limit to the stage Saturday weighing 24 pounds, 8 ounces – the largest bag of the event – to win the Knockout Round and advance to the final day of competition at the Major League Fishing (MLF) Tackle Warehouse TITLE Presented by Mercury – the Pro Circuit Championship – in Massena, New York. 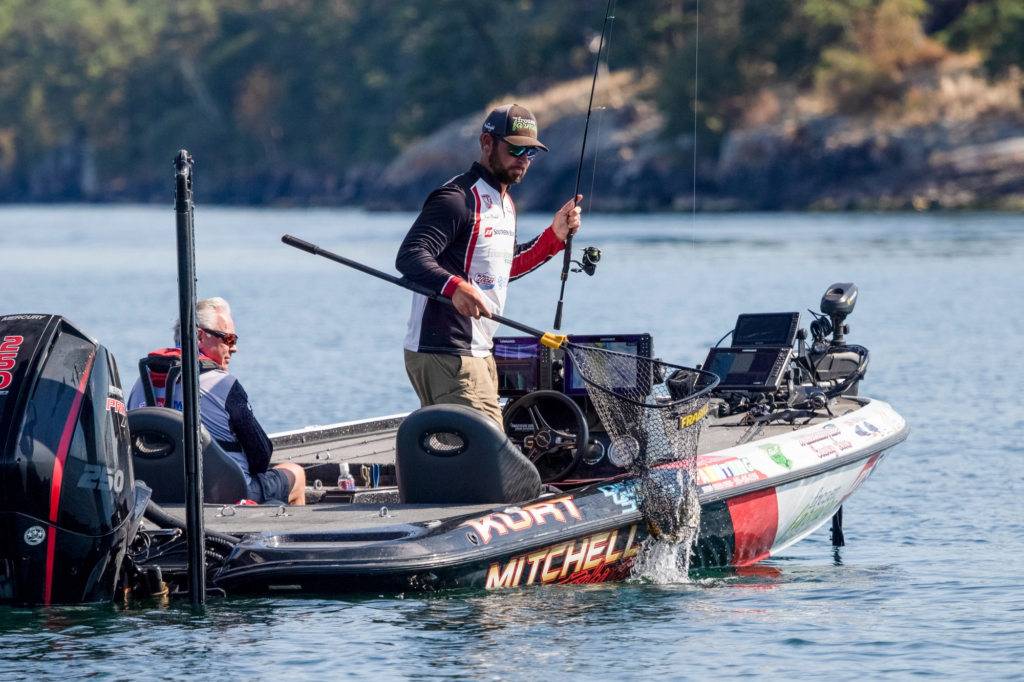 The final 10 anglers are now set, and competition will resume Sunday morning with the Championship Round, where weights are zeroed, and the winner will be determined by the heaviest five-bass limit of the final round.

The Championship Round on Sunday will feature Group A winner Spencer Shuffield of Hot Springs, Arkansas, Group B winner Nick Hatfield of Greeneville, Tennessee, and the top eight anglers from the Knockout Round, competing in a final-day shootout for a top prize of up to $235,000. The six-day event, hosted by the Town of Massena, features the top 48 pros in the 2022 Pro Circuit standings, along with last year’s reigning TITLE champion and reigning Angler of the Year – all competing for a purse of more than $800,000.

The top eight pros from Saturday’s Knockout Round that will compete in Sunday’s Championship Round on the St. Lawrence River are:

“We had perfect conditions today and the St. Lawrence River is continuing to kick them out,” Mitchell said in his post-game interview. “I caught two 5½-pound smallmouth today and that’s never happened before. This place is just phenomenal.”Mitchell said he figured 21 pounds would get him into the Championship Round, but his day didn’t start off at all like he’d planned.

“I thought I had a good game-plan going into today,” Mitchell said. “I hit four or five different areas where I thought I’d catch some good fish, but everything I caught was small. Disappointed, I ran to a buoy where I had caught three good ones on the first day, but they weren’t there anymore.

“I was getting really frustrated and decided to just try to figure out where those fish went. I started searching the shoal where the buoy was, and I found some depressions in that shoal where the fish were holed up. That’s where I caught almost all my fish today. I had about 21 pounds by noon, which is when I started feeling good about making it into the Championship Round.”

While most of the field is running upwards of 90 miles each day, Mitchell said he only has a 55-mile run to his primary area, which he hopes will play to his advantage with the weather that’s forecasted for Sunday’s Championship Round.

“I still have a long run to make, but if the weather comes in like it’s forecasted, the waves can only get so big where I’m going, so I should have a distinct advantage. These guys running all the way to the mouth of the lake are going to have to combat some large waves if they decide to make that run.”

Mitchell said he caught all his fish drop-shotting a swimbait and although he struggled to catch a 3-pounder on Thursday, once he topped 23 pounds in the Knockout Round, he began catching 3-pounders constantly.

“Today was just one of those days – I even caught a 5½-pound kicker accidentally at the end of the day,” Mitchell laughed. “I was running around looking for new areas and I cast over to what looked like a little tiny pebble on my Garmin (Livescope) and reeled in a 5½-pounder.

“Things may change up a little bit tomorrow with the weather coming in, but I’m happy with what’s going on so far and am looking forward to Sunday,” Mitchell finished.

Rounding out the top 20 finishers were:

A complete list of results can be found at MajorLeagueFishing.com.Overall, there were 90 bass weighing 366 pounds, 2 ounces caught by the 18 pros on Saturday, all with five-bass limits.

Pro Dakota Ebare of Brookeland, Texas was also presented the Forrest L. Wood Sportsmanship and Community Leadership Award during the weigh-in on Saturday. The award recognizes a TITLE qualifier, nominated by his peers, who displays an overall commitment to sportsmanship and community leadership, on and off the water, through ethical behavior, integrity, class, selflessness, conservation, volunteerism and kindness to others. Ebare’s nomination cited his genuine concern for the nation’s fisheries and his reflection of a true sportsman and leader who is always willing to lend a hand to those in need.

The MLF Tackle Warehouse TITLE Presented by Mercury – the Pro Circuit Championship – features a hybrid tournament format. All 50 anglers were seeded into two groups of 25 – Group A & Group B, based on points earned in 2022 qualifying events – where they competed in Qualifying Rounds over the first four days of the tournament.

The 25 anglers in Group A competed in their two-day qualifying round on the St. Lawrence River on Tuesday and Thursday – the 25 anglers in Group B on Wednesday and Friday. After each group’s two-day Qualifying Round, the anglers that finished in 2nd through 10th place from both Group A and Group B advanced to Saturday’s Knockout Round. In the Knockout Round, weights were zeroed and the remaining 18 anglers (nine anglers from Group A, and nine anglers from Group B) competed to finish in the top 8 to advance to the Championship Round. Tomorrow, in the final day Championship Round, weights are again zeroed, and the winner will be determined by the heaviest five-bass limit of the final round.

Anglers will take off at 7 a.m. ET on Sunday from the Massena Intake Boat Launch, located at 1415 State Hwy 131 in Massena. Sunday’s weigh-in will also be held at the boat launch at 3 p.m. The MLF NOW! broadcast team of Chad McKee, Marty Stone and J.T. Kenney will break down the extended action from 7:30 a.m. to 2:30 p.m. on Sunday and fans are welcome to attend the event or follow the action online through the MLF NOW! live stream and coverage at MajorLeagueFishing.com.

Along with the launch and weigh-in, fans and community members are invited to the MLF Fishing and Outdoor Expo on Sunday, Aug. 21 from noon to 8 p.m. ET at the Massena Intake Boat Launch, where fans can meet the pros and check out the latest in fishing and outdoor gear. The expo includes food trucks, kids’ activities, giveaways and more.

The first 100 middle school and high school students will receive a free Abu Garcia rod and reel at the Expo on Sunday and fans can register for a Polaris Sportsman 570 ATV giveaway onsite at the Expo. The winner will be drawn after the final weigh-in on Sunday. PAW Patrol’s Skye and Marshall will also be at the event with MLF pro Charlie Evans and will be available for photos. Appearance times may vary. Visit MajorLeagueFishing.com for updates and more details.