JASPER, Ala. — While the bites were hard to come by, Louisiana angler Nick LeBrun caught 15 pounds, 2 ounces of spotted and largemouth bass Thursday to take the Day 1 lead of the 2021 Basspro.com Bassmaster Open at Lewis Smith Lake. 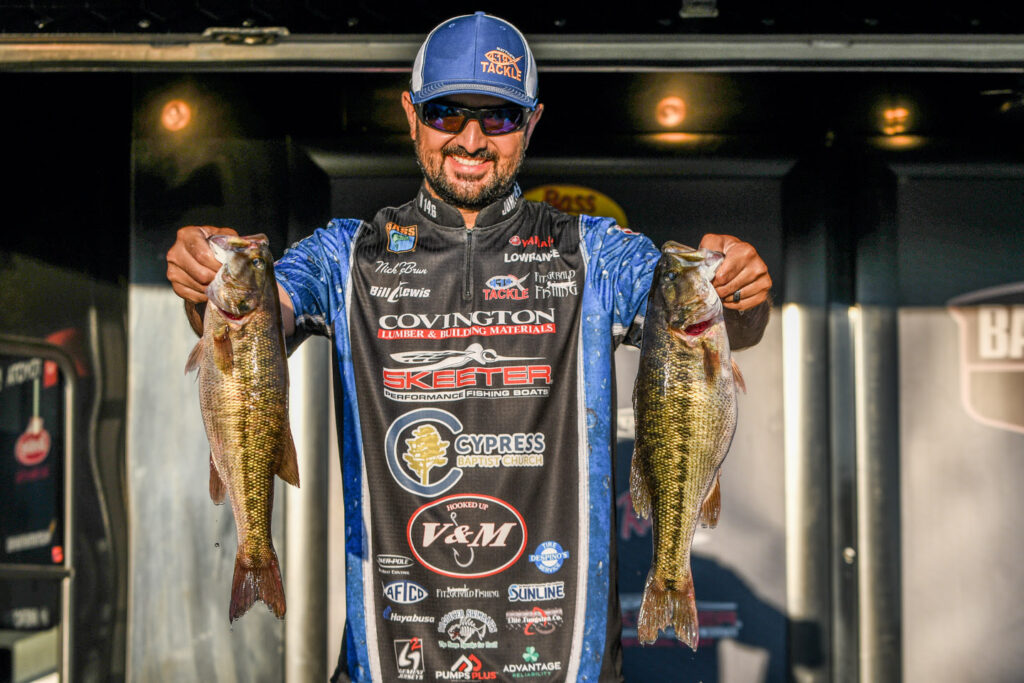 After a practice filled with thunderstorms and drenching rains that brought the lake up several feet, Mother Nature threw one more curveball Thursday morning as the Day 1 takeoff was delayed nearly two hours by fog.

“I didn’t start fishing until after 9 o’clock and that was kind of in my head a little bit,” said LeBrun, who leads Cody Bird by 8 ounces and Brandon Ackerson by 15 ounces. “I was rushing and really wasn’t seeing much on the graph and I changed things up and caught a 3 1/2 about 10 o’clock. That got the momentum going.”

From there, LeBrun was able to add quality spotted bass and largemouth to his bag.

The bass he is targeting are chasing bait over deep water — as deep as 80 feet — but are suspended in the 10- to 20-foot zone. A Damiki rig on 12-pound Sunline SX1 braid with a Sunline FC Sniper 8-pound leader was his most productive bait.

Later in the day, LeBrun said he was able to also find a shallow bite that helped him make a few key culls. He added that some of the areas he’s been fishing got better with the rising water levels.

“I was using ActiveTarget most of the day,” he said. “Nine out of 10 fish that looked like they were good size would dart up at (my bait) and stare at it and follow it. But every once in a while, you’d find one that acted like it hadn’t seen a bait before.

“There wasn’t any getting it away from it. But the key is covering enough water and finding those active fish.”

Of his seven keepers, LeBrun landed four spotted bass and three largemouth. While he has one particular pattern going to target largemouth, the spotted bass aren’t that far away.

“If you point that transducer out there while you are fishing, you can stumble on some schools,” LeBrun said. “I’m being intentional about largemouth fishing, but every once in a while, I need to stop and look around out there. The spots are out there on that bait.”

The winner of the 2020 Central Open on Alabama’s Neely Henry Lake and a qualifier for the 2021 Academy Sports + Outdoors Bassmaster Classic presented by Huk, Bird said many of the areas he found in practice were dirtier than expected after the heavy rains. He didn’t land a keeper until around 1 p.m.

“During practice, I only caught two 3-pounders,” Bird said. “This is the best day I’ve had since Friday. I stayed shallow and decided not to chase those herring fish.”

While a weather delay messed with his mindset during the Classic, a later boat draw and check-in time Thursday helped the Texas native stay focused.

In his years of experience on Lewis Smith Lake, Bird knows the largemouth bite can be finicky and that makes him unsure how the rest of the tournament will go.

“I may not catch one tomorrow,” he said. “I’ve got some other stuff, but when you run around you waste so much time and I have a short day tomorrow. I’m going to have to stick it to them earlier tomorrow.”

He added that he has caught keeper spotted bass in practice and was surprised he didn’t land any Thursday.

Ackerson caught 14-3 and anchored his bag with a 5-15 largemouth, which leads the Phoenix Boats Big Bass of the Tournament standings.

“I thought I was hung up in a brushpile,” the Oklahoma native said. “I knew I had a bite and I set the hook and it didn’t move. Then I felt the head shake, and then it came free and still didn’t come up. And I said, ‘I’m in trouble.’ I cranked hard on it and never stopped and brought it right over the gunnel and right in the boat.”

While Ackerson had quality bites, they were few and far between. His first stop was in an area where he caught fish on a topwater bait in practice, but he was unable to get those fish to commit. From there, he moved close to 40 times throughout the day.

“The zones I was targeting were pretty specific. It was hit it and move,” Ackerson said. “I had a good first day of practice but it progressively got worse every day. I was pretty limited to what I thought was good, so I stuck with that and never put it down. I knew I wasn’t going to get a lot of bites, but I thought I could get five.”

On the co-angler side, Kelly Townson of Hartselle, Ala., leads with 6-13 followed by Levi Allgeier with 6-11 and Ruben Arevalos with 6-7. Curtis King of Plaquemine, La., caught the Phoenix Boats Big Bass of the Day on the co-angler side with a 3-15.

After landing in 11th with 11-12 on Day 1, Jacob Powroznik from North Prince George, Va., maintained his lead in the Falcon Rods Bassmaster Opens Angler of the Year standings with 1,361 points. Tommy Williams is second with 1,315, followed by Sam George with 1,240.

John Garrett leads the Central Opens standings with 387 points, while Brandon Lester and Jay Przekurat are tied for second with 379.

The full field will launch from Smith Lake Public Boat Ramp Friday at 6:30 a.m. CT and will return for weigh-in at 2:30 p.m. The nonboater champion will be crowned at the conclusion of weigh-in, while the Top 10 boaters will compete on Championship Saturday. Saturday’s weigh-in will be held at the Bass Pro Shops in Leeds, Ala. Full coverage of the event will be available at Bassmaster.com.