TULSA, Okla. (Sept. 20, 2022) – Major League Fishing (MLF) announced Tuesday the schedule, rules and entry dates for the 2023 MLF Abu Garcia College Fishing Presented by YETI and 2023 High School Fishing Presented by Favorite Fishing seasons. Both circuits include advancement opportunities to compete in the 2023 Toyota Series Championship, and for college anglers, enhanced payouts with a shot to compete against the world’s best pros for a $300,000 top prize at REDCREST 2024. 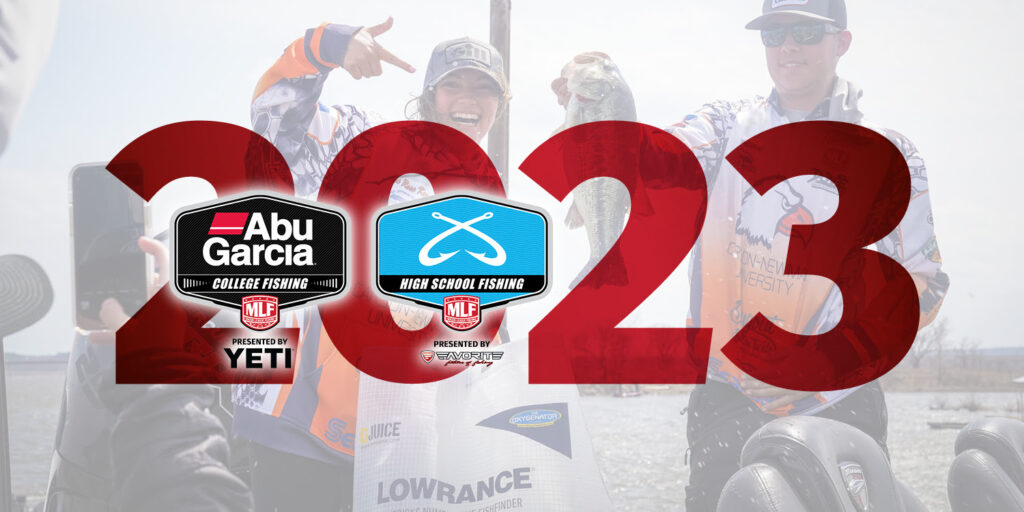 Additionally, each angler finishing in the top 10 at the 2023 College Fishing National Championship will receive priority entry into the 2024 Toyota Series, the pathway to the MLF Invitationals and the Bass Pro Tour. Every tournament will feature live weigh-in coverage on MLF NOW!, and the National Championship will receive national television coverage on CBS Sports.

“We are extremely excited about our new offerings for our college anglers, including a Phoenix boat for first and second place at the National Championship with cash awards through 10th place, and, for the first time ever, the opportunity for a college angler to compete against the best in the world at REDCREST,” said Kevin Hunt, MLF Senior Director of Tournament Operations, College and High School. “We’re visiting some of the top fisheries in the country at the right time of the year, and, with so much on the line in a condensed schedule, we expect 2023 to be the most competitive season we’ve ever had.”

MLF Abu Garcia College Fishing teams can compete in up to eight qualifying tournaments around the country. The top 12 percent of teams from each event will advance to the following year’s College Fishing National Championship.

The successful Wiley X College Faceoffs will also return in 2023. The four-event series showcases teams competing in an MLF catch, weigh, immediate-release team format. The Faceoff tournaments occur the day following an Abu Garcia College Fishing competition, on the same body of water. The results from the College Fishing tournament the previous day determine the 20 competitors for the Wiley X College Faceoff, with the top two teams (four anglers) from the top five schools in the qualifying tournament advancing to compete in the 10-boat Faceoff.

Registration for the 2023 season opens at 8 a.m. CT on Dec. 12, 2022, for teams from school clubs represented in the 2022 College Fishing National Championship. All other teams may enter beginning Dec. 13. Fields are capped at 250 boats per tournament, so teams are encouraged to enter at their earliest opportunity. Teams can register at MajorLeagueFishing.com or by calling 270.252.1000. The entry fee is $100 per team.

Registration for the 2023 MLF High School Fishing Opens will begin at 8 a.m. CT on Dec. 14, 2022. Teams can register at MajorLeagueFishing.com or by calling 270.252.1000. There is no entry fee for high school anglers to compete in any MLF or TBF High School Fishing tournament. Both anglers must, however, be a member of the Student Angler Federation (SAF). There is no limit to the number of teams accepted into a tournament from each school or club, but the maximum field size is 250 boats. Teams are encouraged to enter at their earliest opportunity.