LA CROSSE, Wis. (July 31, 2020) – Yamamoto Baits pro Tom Monsoor of La Crosse, Wisconsin, brought a  five-bass limit weighing 13 pounds, 5 ounces, to the scale Friday to retain his lead after day three of the Tackle Warehouse Pro Circuit at the Mississippi River presented by OPTIMA Batteries. Monsoor now enters the fourth and final day of competition as the No. 1 seed in the Super Tournament that features 200 of the world’s best bass-fishing anglers from FLW and Major League Fishing (MLF) competing for a piece of the $1.3 million prize pool. 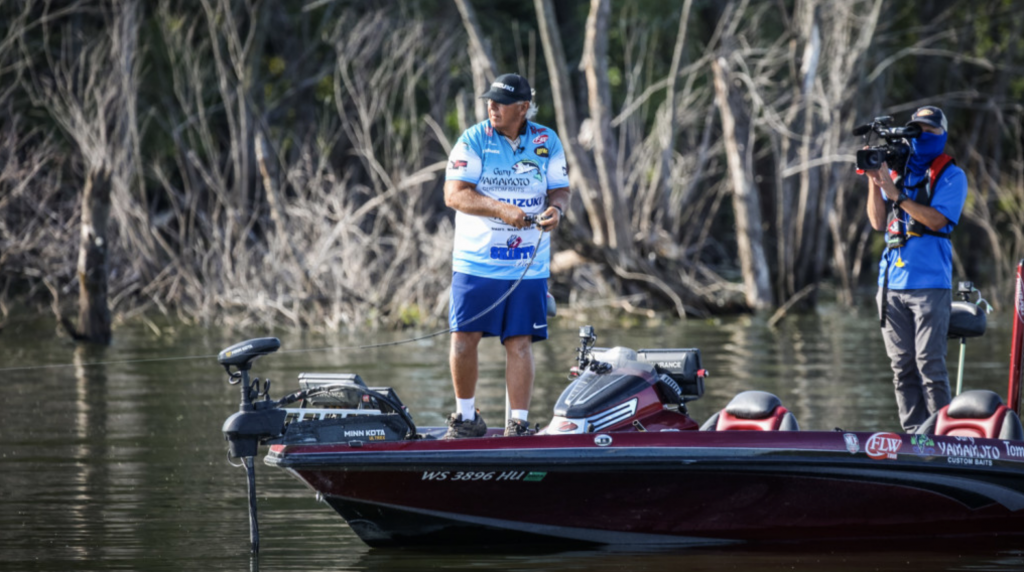 Monsoor has crossed the stage with a three-day total of 15 bass weighing 42 pounds even, which gives him a slim 1-pound, 1-ounce lead over second-place pro MLF angler Zack Birge of Blanchard, Oklahoma, who caught five bass today weighing 13 pounds, 2 ounces. Birge has weighed in 15 bass totaling 40 pounds, 15 ounces in his three days of competition.

“It was pretty tough, today. At noon I only had 7½ pounds, and I went through around 50 fish to even get that,” said Monsoor, who has one prior win – on the Potomac River in 2017 – in Tackle Warehouse Pro Circuit competition. “Right at the end of the day I pulled up to a weed bed and caught my biggest fish of the day, and two other nice ones. You just have to keep plugging away and never give up out there.

“I caught more fish today than I had on the first two days combined, but I just couldn’t find the big ones,” Monsoor said.

Monsoor spent his morning on two offshore spots in Pool 8, near the Black River. His first spot was producing until an altercation with a local water ski boat in the same area shut it down.

“That kind of wrecked my morning,” said Monsoor. “I’ve been here all my life, and I’ve never had anybody do that before. They ski there all the time. I fish there all the time. There’s never been a problem. That took the edge off right away. I was having fun until that. I was going to catch some fish there, too. But he shut it down.”

Monsoor managed to catch around 10 pounds off of his second area before running into his three bigger fish later in the day.

With numerous top-10 finishes and six career victories on the Mississippi River in various levels of FLW competition, a victory on the Tackle Warehouse Pro Circuit is the only trophy that has eluded Monsoor here in La Crosse. With one day left, Monsoor said all he can do is fish as hard as he can.

“The big FLW events are my worst tournaments,” Monsoor went on to say. “The worst! I couldn’t do any worse. And I’ve had the best practices before these events. This is the first one it hasn’t screwed me on. So, I want this one really bad. All you can do is fish as hard as you can, and nobody fishes harder than me. I know that. I don’t stop.”

The top 10 pros advancing to the final day of competition on the Mississippi River are:

Finishing in 11th through 30th are:

Full results for the entire field can be found at FLWFishing.com.

The Tackle Warehouse Pro Circuit at the Mississippi River presented by OPTIMA Batteries is hosted by Explore La Crosse.

In Tackle Warehouse Pro Circuit Super-Tournament competition, the full field of 200 pro anglers competed in the two-day opening round on Wednesday and Thursday. The top 50 pros based on their two-day accumulated weight advanced to Friday. Now only the top 10 pros will continue competition on Championship Saturday, with the winner determined by the heaviest accumulated weight from the four days of competition.

MLF pros competing in the Pro Circuit Super Tournaments will fish for prize money only. No points will be awarded toward any championship or title to MLF competitors. Only the original Tackle Warehouse Pro Circuit anglers will compete for the AOY title throughout the remainder of the season. AOY points in the final events will be awarded based on Pro Circuit anglers finishing order. The top-finishing FLW pro will receive “first-place points” regardless of where he finishes in the overall standings, and so on.

The final 10 anglers will take off at 7 a.m. CDT Saturday from Stoddard Park, located at 502 Forest Lane, in Stoddard. Saturday’s Championship weigh-in will also be held at Stoddard Park and will begin at 4 p.m. Attendance is limited to competing anglers and essential staff only. Fans are encouraged to forgo the daily takeoffs and weigh-ins and follow the event online through the expanded four-day “FLW Live” on-the-water broadcasts and weigh-in coverage at FLWFishing.com.

The popular FLW Live on-the-water broadcast will air each day of competition, featuring live action from the boats of the tournament’s top pros each day. Host Travis Moran is joined by Toyota Series pro Todd Hollowell and MLF’s Marty Stone to break down the extended action each day from 8 a.m. to 2 p.m. On-the-water broadcasts are live streamed on FLWFishing.com.