ST. CLAIR SHORES, Mich. (Sept. 14, 2021) – Pro Andy Morgan of Dayton, Tennessee, boated 28 scorable largemouth bass Tuesday weighing 93 pounds, 1 ounce to win the Knockout Round and advance to the final day of competition at the Major League Fishing (MLF) Bass Pro Tour CarParts.com Stage Seven at Lake St. Clair Presented by Covercraft in St. Clair Shores, Michigan. The final 10 anglers are now set, and competition will resume Wednesday morning with the Championship Round. Weights are zeroed, and the angler that catches the most weight will win the top prize of $100,000. 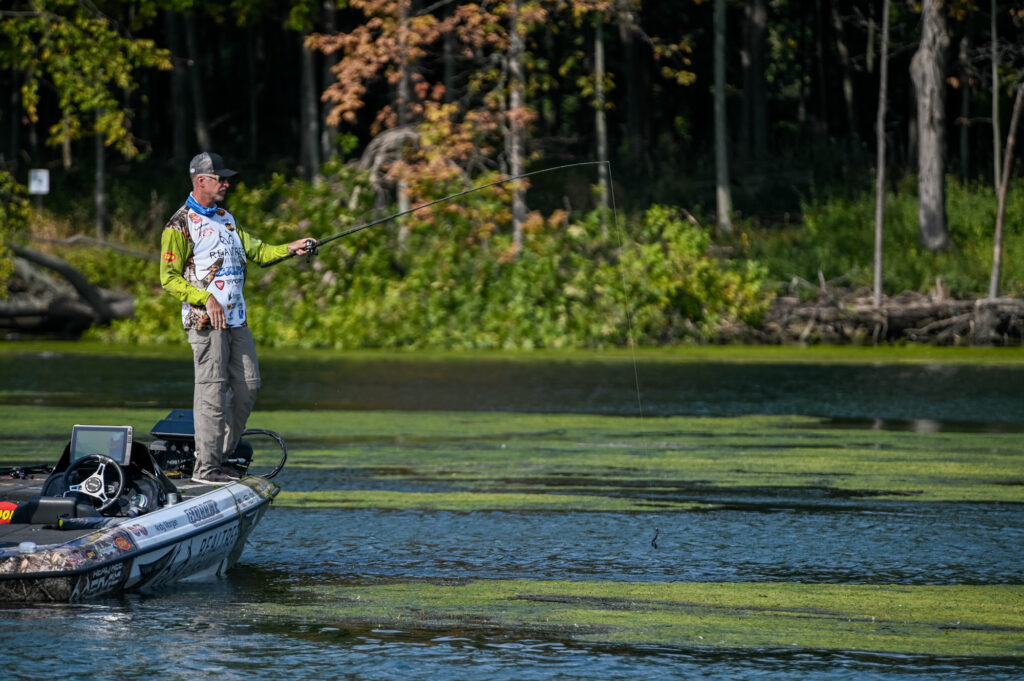 Wheeler Ends Round in Fifth to Clinch First Career Angler of the Year Title and Earn $50k, Final 10 Anglers Set for Championship Wednesday and $100,000 Final-Day Shootout

The six-day tournament, hosted by Macomb County, St. Clair Shores and the Detroit Sports Commission, features 80 of the top pro bass-fishing anglers from around the world competing for a purse of $805,000, including a top cash prize of $100,000 to the winner.

The top eight pros from Tuesday’s Knockout Round that will compete in Wednesday’s Championship Round on Lake St. Clair are:

“To be totally honest I am just tickled to have a good tournament right here at the end of the year,” Morgan said in his post-game interview. “It’s been a grueling journey for me this year, for sure. The toughest year of bass fishing that I have had since the beginning of my career. But we struggled through it, caught a few here and there and now have a strong ending to the season.”

Morgan put a big flipping stick with a heavy weight and braided line in his hands and went to work, Tuesday. He targeted largemouth, flipping shallow mats and vegetation and never put the flipping stick down throughout the day.

Academy Sports + Outdoors pro Jacob Wheeler of Harrison, Tennessee, ended the Knockout Round in 5th place and punched his ticket to the Championship Round, clinching the 2021 Bass Pro Tour Angler of the Year (AOY) and the $50,000 prize. Wheeler needed to finish 12 spots ahead of Blaine, Tennessee’s Ott DeFoe to clinch the title, and after DeFoe ended the event in 32nd place, Wheeler’s 5th place finish locked up the first career AOY title for the 31-year-old angler.

“Unbelievable. To win this award means so much to me,” Wheeler said when he learned that he had clinched the title. “There has been one title that has eluded me in my career – the Angler of the Year. I’ve had seconds, thirds, fourths. After Stage Three at the Harris Chain I thought there was no way I was going to be able to make up the deficit. This has just been an unbelievable season.

“I need to give a huge shout out to Ott (DeFoe),” Wheeler continued. “He is an insane fisherman, just an insane angler. We pushed each other to fish harder, and he pushed me so much this year. Winning a Championship event is awesome, but when you can win Angler of the Year that means you are the best for the entire year. And to do that against this group of anglers… I don’t know what to say. I am speechless.”

There were 542 bass weighing 1,565 pounds, 7 ounces caught by the 38 pros Tuesday, which included two 6-pounders and four 5-pounders.

The 40 Anglers in Group A competed in their two-day qualifying round on Lake St. Clair on Friday and Sunday – the 40 anglers in Group B on Saturday and Monday. After the two-day Qualifying Round, the anglers that finished in 2nd through 20th place from both groups advanced to Tuesday’s Knockout Round, while the winner of each group advanced directly to Wednesday’s Championship Round. In the Knockout Round, weights were zeroed and the remaining 38 anglers competed to finish in the top 8 to advance to the Championship Round. Tomorrow, in the final-day Championship Round, weights are zeroed and the highest one-day total wins the top prize of $100,000.

The final 10 anglers will take off from the 9-Mile Ramp, located in St. Clair Shores, at 8 a.m. ET Wednesday. The General Tire Takeout ceremony and trophy presentation will also be held at the Launch Ramp, beginning at 5 p.m. Fans are welcome to attend the Championship Round takeoff and takeout ceremonies and also encouraged to follow the event online throughout the day on the MLF NOW!® live stream and SCORETRACKER® coverage at MajorLeagueFishing.com.

The MLF NOW!® broadcast team of Chad McKee, Marty Stone and J.T. Kenney will break down the extended action each day of competition from 8:45 a.m. to 5:30 p.m. ET. MLF NOW!® will be live streamed on MajorLeagueFishing.com and the MyOutdoorTV (MOTV) app.