PALATKA, Fla. — Two days of persistence and adaptation have landed Paul Mueller in the lead at the AFTCO Bassmaster Elite at St. Johns River heading into Championship Monday. 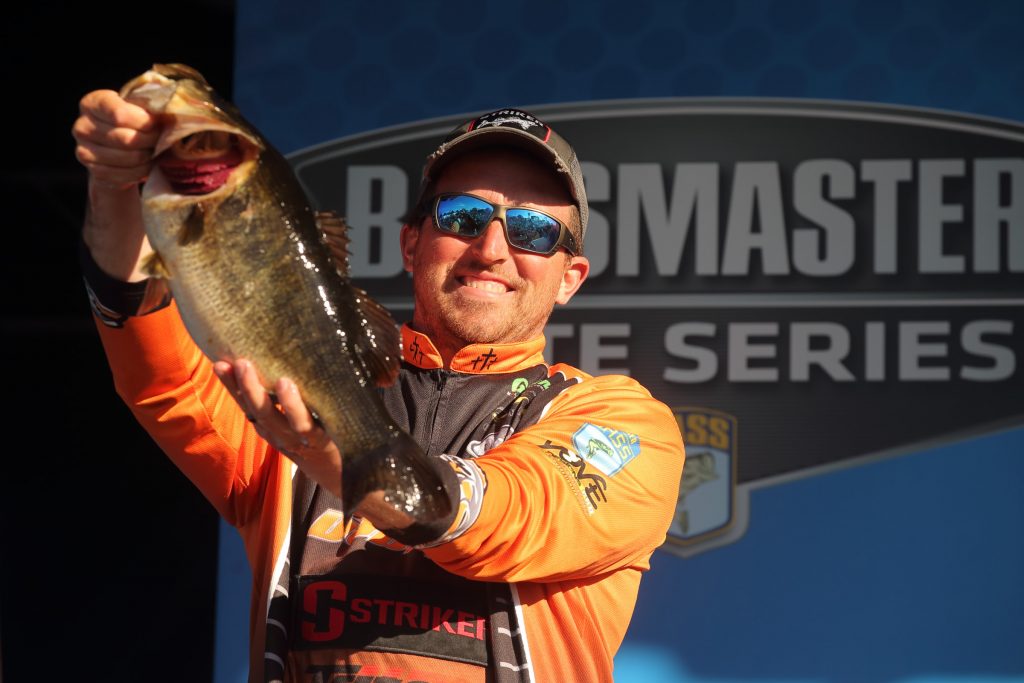 Paul Mueller, of Naugatuck, Conn., is leading after Day 2 of the AFTCO Bassmaster Elite at St. Johns River with 36 pounds, 10 ounces.  Photo by Seigo Saito/B.A.S.S.

Mueller, the veteran Elite Series pro from Naugatuck, Conn., caught a five-bass limit that weighed 16 pounds, 2 ounces during Sunday’s second round. Added to his first-round catch of 20-8, it gave him a two-day total of 36-10.

Mueller, who earned his first Elite victory last year at Georgia’s Lake Lanier went in the opposite direction of most his competitors. While most anglers fished south of the Palatka City Dock and Boat Ramp, Mueller committed his day to the same creek he fished Saturday, well north of the takeoff site.

The day began slowly, but Mueller said he believed in his area enough to keep casting the Strike King Hack Attack swim jig trailed with a Zoom Speed Craw that produced his Day 1 bag. He steadily picked up keepers before finding a day-making 6-4 largemouth.

“What a key bite; that fish anchored my weight,” he said. “I made an adjustment at the end of the day and that was it. I caught the majority of my fish earlier on the swim jig, but I just couldn’t get a big bite, so I started punching a 3-inch junebug-color craw with a 1-ounce tungsten weight.

“I felt like the fish moved under the mats. There wasn’t as much water in the place I was fishing as there was on Day 1, but I felt like if I could find a mat with enough water on it, there would be a big fish there.”

Notably, Mueller said the spot that produced his 6-4 was approximately 10 yards from where he lost an estimated 8-pounder on Day 1. Describing his kicker as a classic prespawn fish, Mueller said the positioning told him the chunky bass was staging for a shallow move.

“There was a little point in the mat next to a little piece of wood on a transition of where the creek channel swung in to the bank,” he said. “The fish could spawn anywhere left or right in those pads.”

Despite warmer conditions than Day 1, Mueller said he did not believe many fish had started recovering from the week’s cold front. One possible explanation could be that the strong winds that postponed the tournament’s start by two days had blown a lot of water out of his area.

“I thought more fish would show up today but it was tough,” he said. “I think the key was that the water level was lower than it should be. If it comes up tomorrow, a few more fish could be positioned right where I can catch them. I think some of those big fish are out deep and when it gets right, they move up.”

Jaye, who started the day in first place with a 15-ounce lead, slipped to second with 35-10.

Adding 14-3 to his Day 1 bag of 21-7, he stuck with the same game plan — throwing a jerkbait over a spring. His bag included a 4-pounder, but he lost one possibly larger on the same area that produced a 9-pounder Saturday.

“I had another place I could go catch a couple of keepers, but I’m trying to win and I knew I was where the big fish are,” Jaye said. “I figured if I caught one there, it would be equal to two I’d catch somewhere else.

“The channel bend comes around close to the reed line and it’s easy access for the fish to move right up to the reeds to feed. I lost that big one and I lost another one on a worm on a laydown. I had my opportunities and that’s all you can ask for — to stay within striking distance, and that’s where we are.”

Fishing a wacky-rigged green pumpkin magic Bizz Baits Sassy Stick in a protected canal, Whitaker lost a 6-pounder on camera, but later redeemed himself by catching one of equal size.

“What could have been is always in the back of your mind, but I’m happy with how the day went,” Whitaker said. “I caught my fifth fish 30 minutes before check-in. There are definitely some big fish in that area, so I’m going to go back in there tomorrow and do the exact same thing.”

Elite Series rookie Kyle Welcher of Opelika, Ala., took the lead in the race for Phoenix Boats Big Bass of the week with a 10-1 largemouth.

The Top 20 remaining anglers will fish Monday with a $100,000 first-place paycheck on the line. Takeoff is scheduled for 6:45 a.m. ET at Palatka City Dock and Boat Ramp. The weigh-in will be held at Palatka Riverfront Park at 2 p.m.