Jack Dice is one of just a handful of anglers competing in the Strike King Bassmaster College Series National Championship on Winyah Bay solo this week. The Liberty University graduate is no stranger to making the best out of situations most wouldn’t consider ideal. Whether that’s fishing against the country’s best college teams alone, last minute troubleshooting on his infamous old Ranger, or using well-worn equipment. 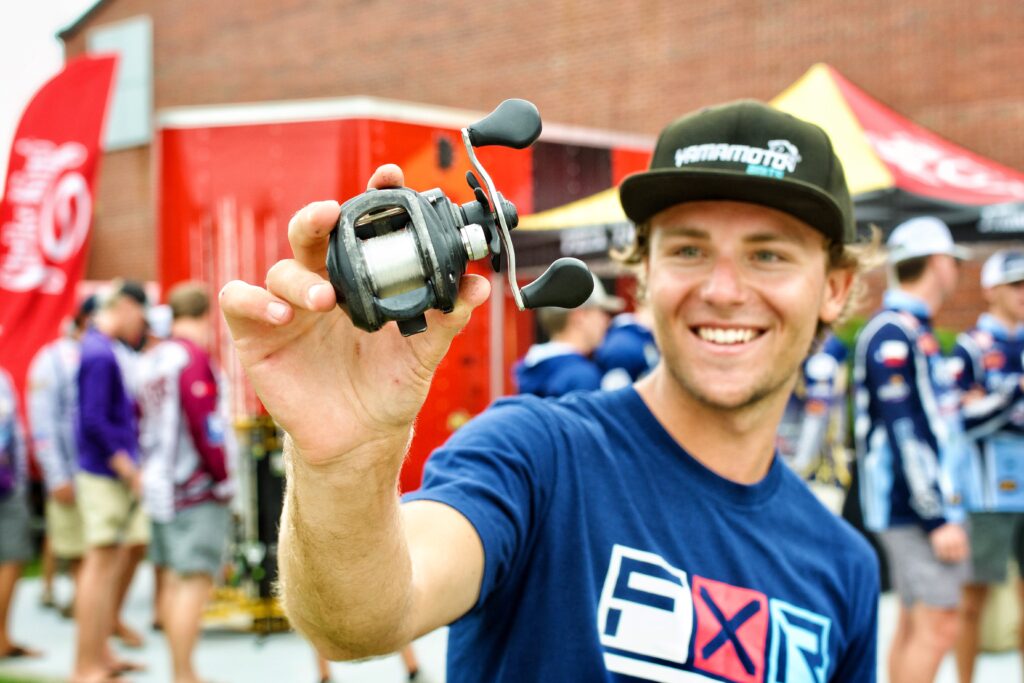 Dice doesn’t mind doing things his own way, as he proved last year when he won a Bassmaster College Series event fishing by himself on Lake Cumberland. And he thinks of the wear and tear on tournament tested equipment like the Lew’s LFS Speed Spool he’s holding in this picture quite fondly.

“This is one of my favorite reels, so when we got a text from Bassmaster encouraging us to bring any Lew’s reels to the meeting for an extra spool of line I knew I had to bring this one. Battle scars and all,” Dice said with a smile.

The College Series title Strike King handed out a spool of Contra Fluorocarbon Line to every angler competing during Wednesday’s Pro Night, and if you brought a Lew’s reel you earned yourself an extra spool of line.

“I actually won this reel in a raffle at a BFL four or five years ago,” Dice recalled. “Raffles are not my jam, maybe it’s the Christian in me and it feels too close to gambling or something, but I can honestly say I have never entered a tournament raffle since. But it felt meant to be at the time and this reel has turned out to be a workhorse for me.”

Dice said he couldn’t pass up a chance at a few fresh spools of line, as fluorocarbon isn’t cheap and he was hoping to get his hands on some 17-lb flouro so he could use this reel for flipping and pitching on Winyah Bay.

“I have had this particular reel spooled up with all kinds of different line over the years, but this reel was my primary player in the first National Championship I ever fished on the Harris Chain in 2020,” Dice said. “The tournament didn’t pan out the way I hoped, but I was catching some nice fish on a squarebill out of brush piles. It was one of the coolest bites I’ve ever had leading into a tournament.”

Riding the momentum from a BFL Super Regional win on Cayuga Lake last weekend, the down-to-earth Virginia native came into the second day of competition in 51st place after weighing just over 8-lbs of tidal water bass in downtown Georgetown on day one. Dice hoped to milk a little better bag of fish out of what he found in his limited practice and improve on his position today.

“I had a fun one-hour flurry today and I learned some things that’ll hopefully make tomorrow an all-day ordeal,” Dice said of his day one efforts. “No matter what though, this is my last college fishing tournament so I’m really just trying to soak it all up and enjoy the process.”