Just like the slogan on the coffee mugs, postcards and t-shirts at the tourist trap reads, Terry Scroggins loves New York. While the Empire State is anything but close to his native Florida, “Big Show” looks forward to hopping in his Tundra and making the 20+ hour drive north each year. 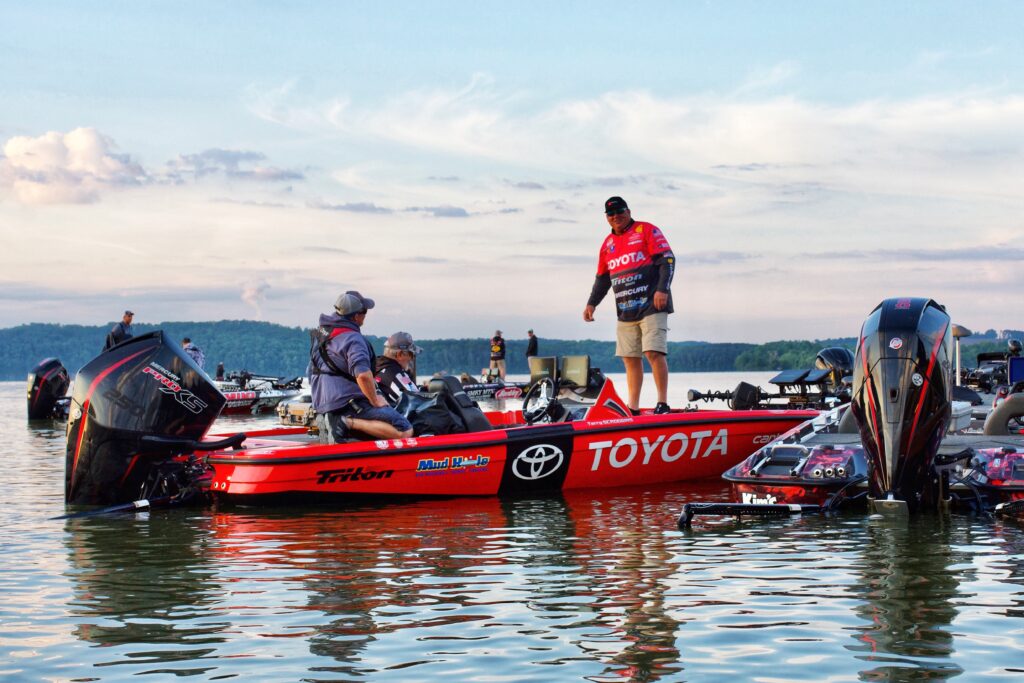 Deep, clear, pristine fisheries full of willing bass, scenic views, and mild temperatures compared to the rest of the country aside; there are plenty of reasons to be fond of the Finger Lakes. But the response that seems to come up consistently is Cayuga’s versatility in terms of techniques, species, structure, and depth ranges. Bass Pro Tour anglers are afforded the ability to fish however they want on Cayuga.

Cayuga Lake and it’s 40,000 plus acres have not served as a playing field for the BPT until this week’s competition for the Fox Rent A Car Stage Six, though these waters have been home to Major League Fishing Cup events in the past. It seems the entire Bass Pro Tour field is excited to compete on Cayuga this week, regardless of where they call home.

“I’ve always loved fishing in New York in the summer and Cayuga is a really cool lake,” Scroggins said. “You can have a flipping stick with 65-lb. braid or 6-lb. fluorocarbon spooled on a spinning rod for the same area and you have no idea what you’ll end up using until the day starts to unfold. You can fish shallow or deep, focus on smallmouth or largemouth, and target plenty of different types of cover. Cayuga offers all kinds of options.”

You can count on the Bass Pro Tour field fully exploiting these options through Stage Six, with anglers being able to fish their strengths and show fans just how many scoreable bass swim in Cayuga.

Scroggins thought back to past tournaments and trips to Cayuga as he made the drive on Tuesday and Wednesday. The longtime Team Toyota pro fished a Cup Event in August on Cayuga two years ago and had a strong event, finishing in fourth.

An accomplished flipper and grass fisherman throughout his career, it’s no surprise that Big Show’s success here came focusing on aquatic vegetation.

“Last time I was here I got on a really good flipping bite that was starting to heat up as the tournament winded down,” Scroggins recalled. “I flipped grass on the north end of the lake with a craw I pour at home and, man, they couldn’t get enough of it. It was one of those tournaments where I wanted to go back out and keep fishing after they called ‘lines-out’. So, you could say I’ve been looking forward to getting back up here.”

While taking cover from a mid-day storm during the first official practice day on Thursday, Scroggins gave me a call to check in. Big Show spent his morning sampling some areas where he’s done with in the past, and it only took him a couple of hours to realize the grass on Cayuga’s north end wasn’t the same as he remembered from previous trips.

He reported there was still plenty of grass, but it wasn’t quite set up like he was hoping.

“The grass definitely ain’t the same as what I remember from the last time we were here,” Scroggins confessed. “It’s so easy to get stubborn with history and preconceived notions, but you gotta steer clear from that trap. Luckily this place is full of fish and this time of year when you find one, there is usually a school with it. I’m going to cover a bunch of water the rest of practice and see what we turn up.”