LEESBURG, Fla. (May 26, 2021) – The Tennessee river rat did it again. Only this time, for the first time in his illustrious career, he did it in Florida. General Tire pro Ott DeFoe of Blaine, Tennessee, caught 30 bass weighing 73 pounds, 14 ounces Wednesday to win the Major League Fishing (MLF) Bass Pro Tour Favorite Fishing Stage Three Presented by Bass Cat Boats at the Harris Chain of Lakes in Leesburg, Florida, and earn the top prize of $100,000. 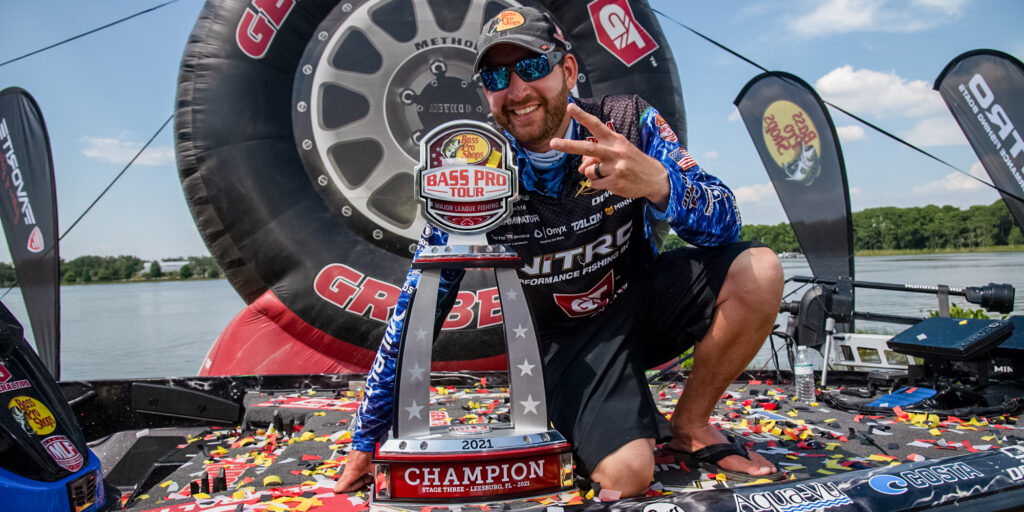 This is surreal right now. After the way this week started, this doesn’t even make sense,” said DeFoe, who earned his third career victory on the Bass Pro Tour – second this season. “I give God all of the glory and credit for this win. My decision-making process took me to Lake Griffin the first day, but I had a terrible first day and had to completely change strategies.

“On Day 2, I stayed here on Harris and pulled up to start on a grass point that had a dock nearby that I could almost cast to. It was divine intervention that told me to start there – I ended up catching almost 40 pounds off of that dock. I truly give God all of the credit for that. Sometimes he closes a window to open a door, and that’s what happened for me that day.”

DeFoe ended up staying in that general area on the south end of Lake Harris, targeting grass and docks for the remainder of the event.

“The area was really good, and you could work it in a lot of different places,” DeFoe said. “The big thing for me was not cranking my motor. Once I went into that stretch, I just put a bait in the water and I fished in and I fished out and really maximized my time. I ended up having two things going – a really, really shallow deal and a deal on the outside edges of the Kissimmee grass.”

DeFoe said he caught a number of scorable bass on a swimjig this week, but that his key bait was his signature series Rapala OG Slim Crankbait.

“It is so cool to win on a bait that I designed. I really thought it would happen at Lake Eufaula this year, but it ended up working well here and that is just a really cool deal for me,” DeFoe said. “The problem was that I was fishing a new color that’s coming out at ICAST and I only own six of them – and three are back at the house. I threw a couple of different colors this week – bream, hot copper green shad and regular copper green shad. The swimjig was a big deal and I caught a lot of fish on that, too, but that Slim was special – especially this afternoon.”

Going into the third and final period of competition Wednesday, DeFoe had a very slim lead, with Bobby Lane, Brent Chapman, Andy Montgomery, and Skeet Reese all looming and very much in contention. DeFoe mentioned to his cameraman that whoever caught the most fish in Period 3 would earn the victory. DeFoe then caught fire, catching 15 bass weighing 41 pounds, 6 ounces in the third period alone to run away from the pack.

“That third period was going to have to be my best period of the whole day, and I’m just so thankful that it was,” DeFoe went on to say. “That was a crazy end to this whole deal. This doesn’t happen often, so I am cherishing this moment.”

Finishing in second place for the second-consecutive event, after his runner-up finish to Jacob Wheeler at the Bass Pro Tour Stage Two at Lake Travis, was local favorite Bobby Lane of Lakeland, Florida, who remains firmly in control of the 2021 Bass Pro Tour Angler of the Year race.

“Bridesmaid again, second place,” Lane said in his post-game interview. “I got to spend all week in Harris and Little Harris just flipping grass, and it was so much fun. But Ott DeFoe just ran away with this one. It was an awesome ending for me. I caught a 2-pounder and a 4-pounder with literally 2½ minutes left to jump from fourth to second. I caught them all week on a Berkley Powerbait Power Hawg and a Berkley PowerBait MaxScent General . I kept everything simple – black and blue, with a ½-ounce Bass Addiction screw in weight with a (Berkley) Fusion 4/0 hook. “

The top 10 pros at the Bass Pro Tour Favorite Fishing Stage Three on the Harris Chain of Lakes finished:

Overall, there were 159 bass weighing 382 pounds, 11 ounces caught by the final 10 pros on Wednesday.

The MLF Bass Pro Tour Favorite Fishing Stage Three Presented by Bass Cat Boats at the Harris Chain of Lakes was hosted by Lake County. The six-day tournament featured 80 of the top professional anglers from around the world competing for a purse of $805,000, including a top cash prize of $100,000 to the winner.

Television coverage of the Bass Pro Tour Favorite Fishing Stage Three Presented by Bass Cat Boats at the Harris Chain of Lakes will be showcased across two two-hour episodes, premiering at 7 a.m. ET, Sept. 25 on the Discovery Channel. New MLF episodes premiere each Saturday morning on the Discovery Channel, with additional re-airings on the Outdoor Channel and the Sportsman Channel. Each two-hour long reality-based episode goes in-depth to break down each day of competition.

The Bass Pro Tour features a field of 76 of the top professional anglers in the world – joined at each event by 4 pros that qualify from the Tackle Warehouse Pro Circuit – competing across seven regular-season tournaments around the country, competing for millions of dollars and valuable points to qualify for the annual Heavy Hitters all-star event and the REDCREST 2022 championship. The next event for Bass Pro Tour anglers will be the B&W Trailer Hitches Stage Four at Lake Chickamauga, June 4-9 in Dayton, Tennessee.