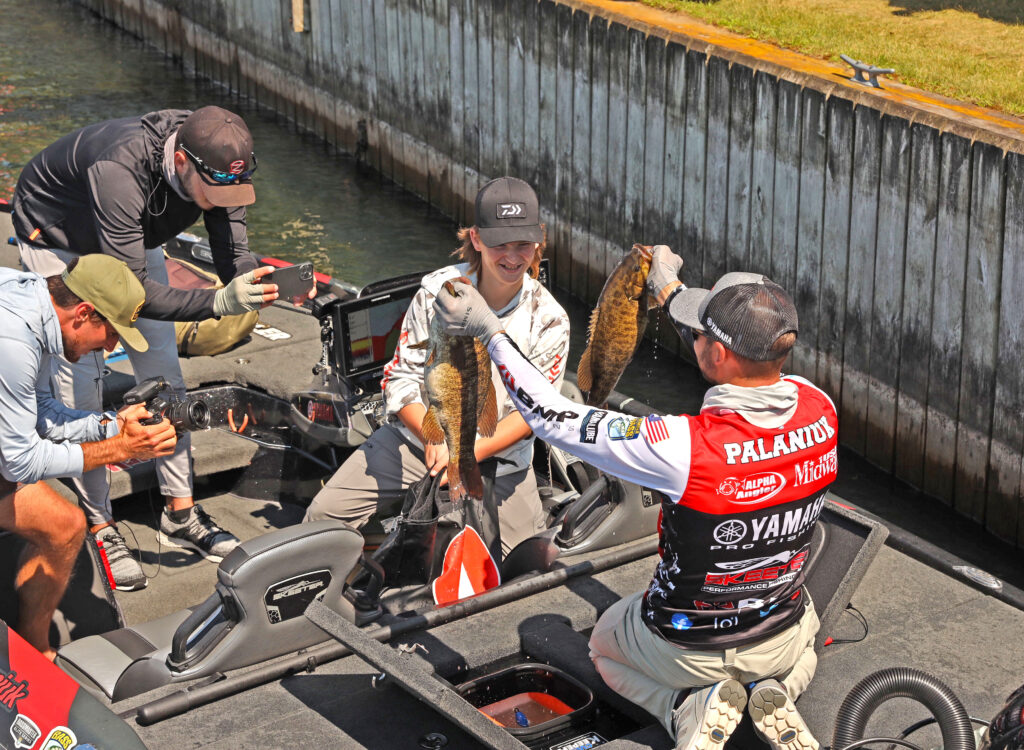 The teenager who labels Palaniuk his favorite angler, was standing with his loving parents in a crowd of a couple dozen fans near the dock when the longtime Yamaha pro entered the harbor to sack-up yet another 20-pound limit of St. Lawrence smallies.

Most folks didn’t notice, but Palaniuk seemed to be stalling just a tad, but only because he was scanning the crowd, and looking to make a young angler’s day.

“I need a kid to help me bag these fish,” said Palaniuk to the crowd. Then quickly singled out Bartley to climb on to his Skeeter.

The Idaho pro was sure to tell the teen to close the bag after each fish was dropped-in, knowing how smallies love to jump, and based on the fact his admirable kindness nearly backfired earlier this year at Santee Cooper when a big bass nearly jumped back in the lake as a youngster helped him load his catch.

Sacked-up successfully with no escapees, Palaniuk toted his catch to the holding tanks, while Bartley stood next to his parents visibly shaken in a real good way.

“I just love Brandon’s social media content, and you can tell he’s an awesome human, and super approachable. Plus, I caught a 6-pound smallmouth last year on one of his X-Zone Finesse Slammer baits!” grins Gower.

Palaniuk says it’s not possible to involve a young fan every single time he loads up a limit, but whenever the situation fits, he makes a concerted effort to do so.

“It’s something I’ve tried to do for a couple seasons now, and hey, I do need help loading my fish, and I know how much it might mean to a kid, so everybody wins,” says the always thoughtful pro, and brand new dad.

Sure enough, everybody won. The Bartleys, who are longtime B.A.S.S. members, drove nearly two hours to take-in their first ever Bassmaster weigh-in, and thanks to Brandon Palaniuk’s kind heart, it’s absolutely one they’ll never forget.