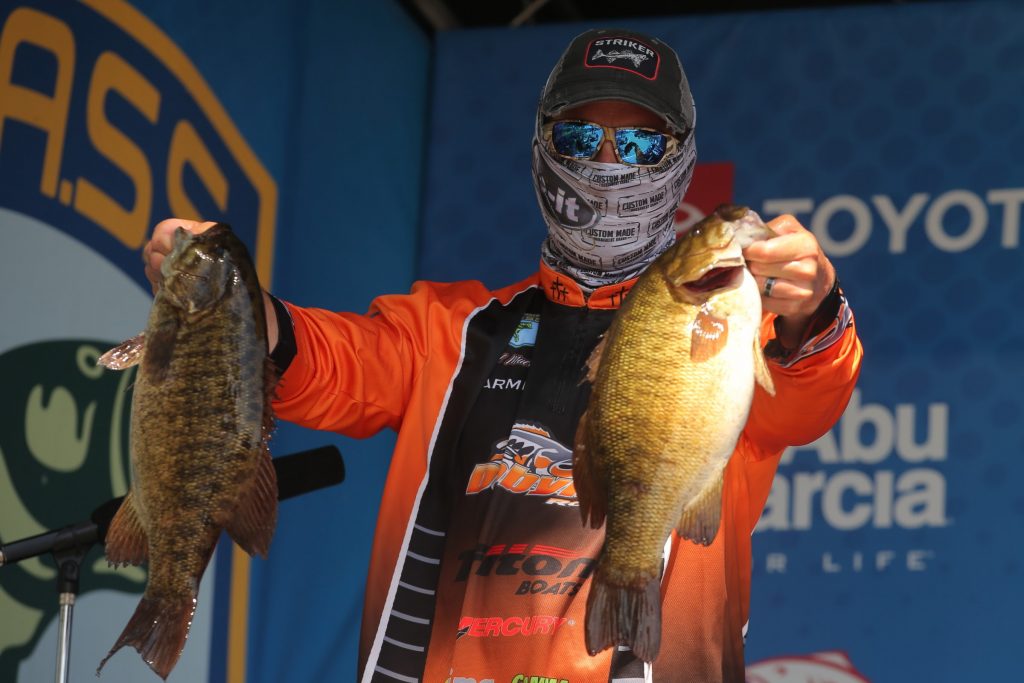 Paul Mueller, of Naugatuck, Conn., is leading after Day 3 of the 2020 SiteOne Bassmaster Elite at St. Lawrence River with a three-day total of 76 pounds, 15 ounces.

Added to his catches of 27-1 on Thursday and 25-1 on Friday, Mueller now has a three-day total of 76-15 that gives him the lead at the SiteOne Bassmaster Elite at St. Lawrence River for the third straight round.

Sticking with his game plan, the Connecticut pro fished Lake Ontario and targeted rockpiles and breaks but remained shallower than the first two days and caught his fish in about 18 to 27 feet.

“I didn’t really look deep because I was disappointed with the deep fish yesterday,” Mueller said. “I probably could have run around a little more, but you have to make decisions and stick with them.”

“Unless you really get on a high rock, you don’t run the risk of fraying your line above the line tie,” he said. “That’s why the drop shot is so effective because your landing ratio is higher than dragging a tube.”

Mueller noted that one of his keepers bit when he deadsticked his drop shot, meaning he applied no shaking motion. He couldn’t replicate that technique elsewhere, but Mueller noted that an overall strategy of slowing down and committing more time to each location seemed to be the right call.

Each of Mueller’s keepers clearly mattered, but his third keeper of the day produced a highlight-reel moment. The 4-pounder bit right off the bow and immediately bolted to the back of the boat. Dashing around his outboard engine, the fish became entangled on one of his Power-Poles.

Mueller was able to grab his leader and hand line the fish close enough to scoop it into the boat.

“That was a positive thing because it could have been a disastrous deal, and I felt very blessed to be able to land it,” Mueller said. “The fish literally had about 8 feet of fluorocarbon leader attached to the Power-Pole and there was no way I was freeing it.

“Thankfully, I got my hands on the fish and she was still pretty hot. That was a special fish catch, for sure.”

Day 3 began with calm conditions, but wind and waves increased to bow-splashing levels by late morning. Sunday’s forecast for stronger southwest winds will further agitate Lake Ontario, but Mueller said he knows where he needs to fish.

“I have some spots in the river where I think I could put together a good bag, but the caliber of fish is much better in the lake.”

Chris Johnston of Peterborough, Ontario, Canada is in second place with 74-12. After making a couple of unproductive drifts on his river spot, he spent all day on Lake Ontario where he caught his bass over rockpiles in 20 to 40 feet.

“I changed up baits today and caught six or seven when I changed from a drop shot,” Johnston said of a clandestine move that paid big dividends. “I’ve caught them doing this before. It’s a bottom-contact bait, and they ate it really well.

“You can’t drag like you could on Lake Erie because there’s moss on the bottom. It’s a different presentation.”

Chad Morgenthaler of Reed Springs, Mo., is in third place with 69-15. Focusing on the eastern shore of Lake Ontario, he fished a drop shot with a Berkley finesse worm and caught his fish in 20 to 26 feet.

“I have areas and then I have some sweet spots in those areas, and that’s what I’m trying to stay around,” Morgenthaler said. “I’m just easing around with my Garmin LiveScope and looking for them. They might be on a rock, they might be out off the rock on a break.”

Mueller is in the lead for Phoenix Boats Big Bass honors with his 7-13 — a bass that is believed to be the biggest smallmouth ever landed in an Elite Series event and possibly the largest caught in any B.A.S.S. event.

In addition to having his third career Elite Series victory within his grasp, Mueller needs 23-1 to earn one of the coveted Century Belts awarded to anglers who catch at least 100 pounds of bass in an Elite Series event. Johnston is 25-4 away from the 100-pound mark — and if either or both reach the mark, they would be the first to receive Century Belts for totals amassed exclusively with smallmouth.

Live coverage of the event will be available starting at 7 a.m. on Bassmaster LIVE at Bassmaster.com with simulcasts on ESPN2 and ESPN3. Check local listings for ESPN2 times.

The tournament is being hosted by Jefferson County in cooperation with the Village of Clayton and the 1000 Islands Clayton Chamber of Commerce.