PBs and Perseverance for College Team of the Year

Logan Parks and Tucker Smith of Auburn University were celebrated last night at the Carhartt Bassmaster College Series National Championship banquet for winning the 2021 Bassmaster College Team of the Year. Parks, a senior double majoring in Supply Chain Management and Information System Management and Smith, a freshman studying Business Marketing had a truly incredible year on the water. 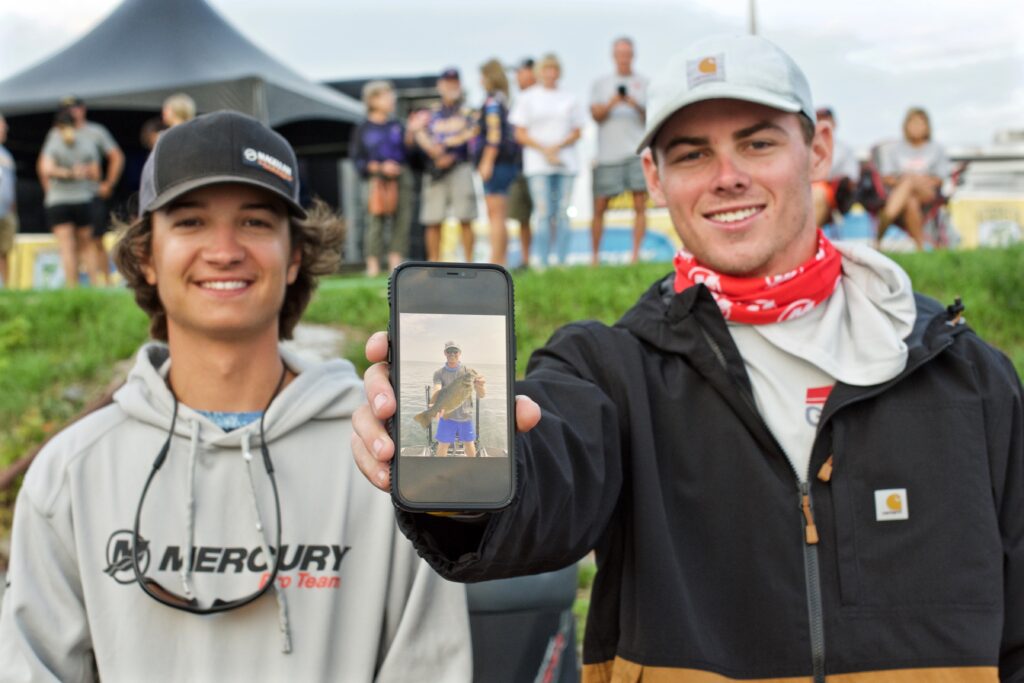 Through four regular season events the duo never finished worse than 16th place, and that includes winning the Saginaw Bay regional in June. They won the Team of the Year points title by an impressive 91 points and were awarded $5,000 from Bassmaster and college series title sponsor Carhartt for their efforts along with a pile of Carhartt apparel and some top-of-the-line equipment from Minn Kota and Humminbird.

But the Auburn Tigers aren’t idling in cruise control here on the St. Lawrence River; they have their sights set on another strong finish and the National Championship trophies.

“It’s been an incredible year but it isn’t quite over,” Parks said with a smile. “We’re going to keep our heads down and work hard over the next few days and see what we can make happen.”

New to the Team of the Year format for 2021 is an automatic berth to the Bassmaster College Series Classic bracket for the winning team. Knowing they already have a one-in-eight shot at representing college fishing in the 2022 Bassmaster Classic would make it easy for Parks and Smith to lay up in this tournament, but that’s not their style.

Smith and Parks came up to New York a couple days before official practice to get in tune with the smallies and within their first ten minutes on Lake Ontario, Parks caught the biggest smallmouth of his life. A 6-pound 8-ounce beast caught on a dropshot that would make any avid anglers’ casting arm twitch.

Their practice on the St. Lawrence River didn’t have quite the same fireworks, but they’re still cautiously optimistic.

“Practice was pretty slow at first, but we changed areas after day one and started to catch some fish,” Smith explained. “We spent the third and final day of practice trying to dial into that area. It’s going to be a long run for us, like 60-miles each way, but it’s the best chance we’ve got so hopefully they’ll still be biting for us today.”

The Auburn Tigers anglers dream season was extremely close to never getting off the starting block, when a misunderstanding with COVID protocols caused the Auburn Bass Fishing Team to be suspended from competition until January 1, 2022.

“In March we competed in the first Carhartt Bassmaster College Series tournament of the year on Lake Hartwell as an “unaffiliated” team but because our boats are wrapped in our school colors we were technically violated our COVID rules,” Parks said. “Thankfully we were able to work with the school and get the suspension reduced in time to fish in the rest of the Bassmaster College Series schedule.”

When word got out about Auburn’s suspension earlier this year, the bass fishing community came together through social media posts and voiced the outcry for Auburn University to take another look at the situation. Thankfully Auburn officials did just that, and the suspension was shortened to just six weeks instead of several months.

“It certainly felt like everything was meant to be this year,” Smith said. “Without things happening exactly the way they did, we wouldn’t have had the chance to win Team of the Year. Through faith, trusting the process, perseverance, and the support of those around us we were able to have an amazing season.”

If you want to watch Smith, Parks, and some of the other Auburn teams in action check out The Reclamation Series on YouTube. Talented young videographer Brandon Fien of Latendresse Media followed the Tigers throughout their season and put together several high quality videos that do a great job of showcasing college fishing.