COLUMBIA, S.C. (April 24, 2021) – Pro Matt Becker of Finleyville, Pennsylvania, padded his Day 2 lead Saturday, bringing a five-bass limit to the scale weighing 17 pounds, 8 ounces to remain in control of the leaderboard after Day 3 of the  MLF Tackle Warehouse Pro Circuit Presented by Bad Boy Mowers, Googan Baits Stop 3 Presented by Favorite Fishing – Lake Murray in Columbia, South Carolina. Becker’s three-day total of 15 bass for 58-10 will give him a 7-pound, 4-ounce cushion heading into the fourth and final day of competition. 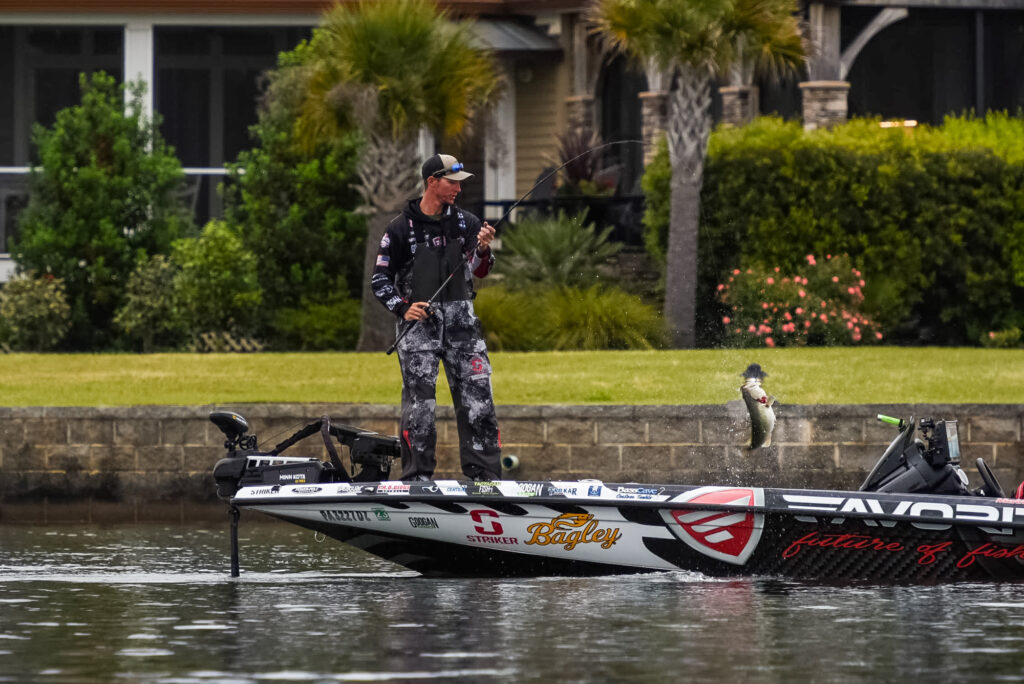 Pro Derrick Snavely of Piney Flats, Tennessee, held on to second place with four bass weighing 13 pounds even, for a three-day total of 51-6. Rookie Tai Au of Glendale, Arizona, jumped from 24th place into 9th on Day 3 with a five-bass limit weighing 17-11, while pro Cody Huff of Ava, Missouri, made the biggest leap from 39th place, barely squeezing into the 10th spot by a mere ounce.

With more than a 7-pound lead, Becker is set up nicely for championship Sunday and with the current weather forecast, it seems the sun – and his herring-spawn streak – will continue to shine. However, with a stacked field in the top 10, Becker said he is hedging his excitement and focused on hard fishing on championship Sunday.

Despite the weather change and rainy conditions Saturday, the 2018 Pro Circuit Rookie of the Year continued his risk versus reward pattern, hitting the edges of points in hopes of finding schooling fish – a pattern that once again kept him at the front of the pack.

“I caught a lot more small fish today, and didn’t catch as many,” said Becker. “I caught three in 10 minutes in the morning and only had two small flurries where I caught three in three casts right before the last storms hit this afternoon. It was not as hot and heavy as it has been, but I’m hoping it was just the weather.”

Becker said once the rain started coming down hard, he was basically just wasting time – time he didn’t have to waste if he wanted to hold on to his lead.

“It was crowded [on the points today], and I got in a bad rotation,” said Becker. “There was a boat on a lot of the spots I wanted to fish. Fortunately, we cut 40 guys after today, so hopefully that opens the lake up more.”

“I can’t look in the rearview mirror,” said Becker. “I just have to go out and do my thing. All that really matters is that I catch them because the other guys will really have to catch them to pass me. Hopefully the sun pops out, the fish bite, and I sack up another 17 to 20 pounds to seal the deal.”

In Tackle Warehouse Pro Circuit competition, the full field of 161 anglers competed in the two-day opening round on Thursday and Friday. The field was cut to 50 anglers on Saturday. Now, the top 10 pros based on their three-day cumulative weight advance to Sunday where the winner will be determined by the heaviest accumulated weight from all four days of competition.

The final 10 anglers will take off at 6:30 a.m. ET on Sunday from Dreher Island State Park, located at 3677 State Park Road in Prosperity. Weigh-in will also be held at the park on Sunday at 3 p.m. Attendance is limited to competing anglers, family, essential staff and media covering the event. Fans are encouraged to follow the action online through the MLF NOW! live stream and coverage at MajorLeagueFishing.com.

The MLF Tackle Warehouse Pro Circuit presented by Bad Boy Mowers, Googan Baits Stop 3 Presented by Favorite Fishing – Lake Murray will feature live on-the-water coverage and a two-hour action-packed television show that will premiere on the Outdoor Channel on Sunday, July 25 from 7 to 9 a.m. ET and re-air on the Sportsman Channel this fall. Weigh-in will be streamed and fans can catch live on-the-water action all day Sunday, April 25 on MLF NOW! beginning at 7 a.m. ET at MajorLeagueFishing.com.