SYRACUSE, N.Y. — It was a day of firsts for Bill Perkins, as the New York pro made the most of his Basspro.com Bassmaster Opens debut to dominate the Northern Division event at Oneida Lake from start to finish with a three-day winning total of 52 pounds, 3 ounces. 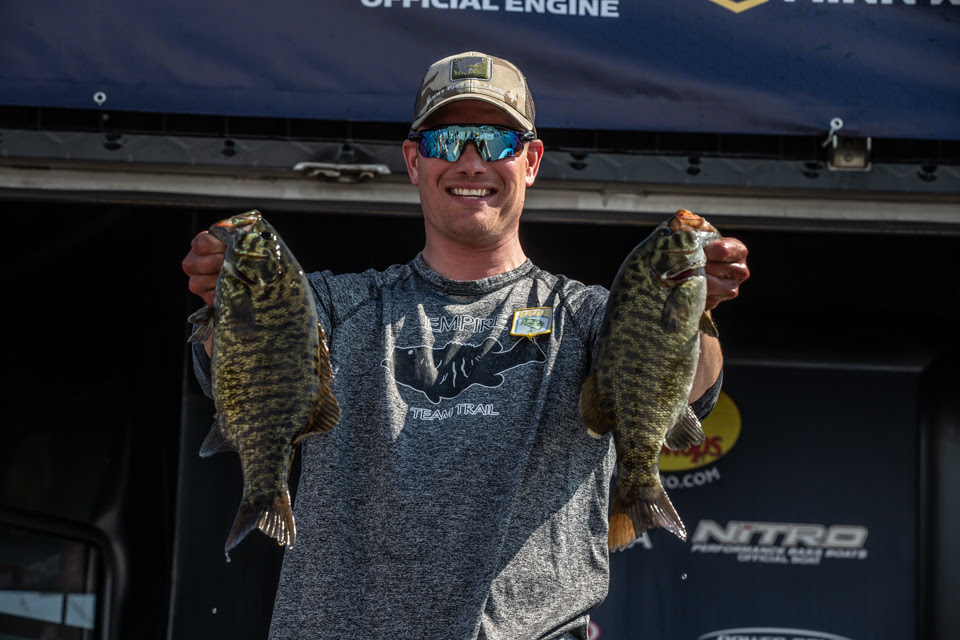 With weights of 18-11 and 17 pounds, the first two rounds gave Perkins a slim lead each day. On Championship Saturday, he stepped on the gas, added 16-8 and crossed the finish line more than 2 pounds ahead of second-place A.J. Slegona Jr., of Walker Valley, N.Y.

Because Perkins didn’t fish the first Northern Open of the season on the James River, he’s not eligible for an automatic berth into the 2022 Academy Sports + Outdoors Bassmaster Classic presented by Huk. That berth will go instead to Texas pro Ray Hanselman, who was sitting on the verge of Classic qualification in the Bassmaster Elite Series Angler of the Year standings.

But Perkins, a resident of Rochester, N.Y., still earned the Skeeter Boats top prize of $45,000 — and was finally able to breathe a sigh of relief.

“I haven’t let loose in three days; I haven’t slept, I haven’t eaten, I’ve been losing my mind, but it was all worth it,” he said. “I don’t know what to say, I’m just superappreciative.

“Thank God — He blessed me this week and He’s blessed me time and time again. I thank B.A.S.S., I thank my family and friends. The last three days have been epic. I won’t ever forget it.”

Spending his tournament in the midlake region, Perkins targeted rocky bottom structure in about 14 to 20 feet.

The first two days, he had to contend with full-field crowding, plus strong winds that presented challenging conditions. While there was no escaping the boat pressure, Perkins managed to moderate the latter impediment with tackle adjustments.

“I was fishing a drop shot with a 2.8-inch Keitech Easy Shiner and a 1/4-ounce tungsten weight, and a 1/6-ounce Z-Man finesse Ned head with a Z-Man TRD in the goby Bryant color,” Perkins said. “I had to go heavier on my weights to keep the baits on the bottom.

A field that was reduced to 10 for the final round allowed Perkins the freedom to fish just about anywhere he wanted. The biggest advantage, however, was the nearly flat conditions, which allowed him to closely inspect his area with his Humminbird MEGA 360 and make precise presentations.

“I’ve been running multiple areas and today, I sat down on my best spot in Fisher Bay because there wasn’t as many guys on the water and I had it all to myself,” Perkins said. “There was a bunch of isolated rock in there and I was just slowly picking it apart.”

Surprisingly, Perkins was unable to get bit on his drop shot or Ned Rig Saturday, so he switched to a 1/2-ounce Keitech tungsten football head with a green pumpkin Keitech Spider Grub. Working this bait with a painfully slow retrieve delivered prompt results.

Day 1 yielded only six bites and Perkins had to endure several hours of catching only drum before boating a bass at 11:30. Day 2 started more productively, with a limit by 10:04, but Perkins would catch only six fish. He attributed his final-round success to persistence.

“The key was staying put,” he said. “I got all my good bites in Fisher (the first two days) and I said, ‘There’s not going to be nearly as many guys today, I’m gonna buckle down in there.’ I had it all to myself — it was great.”

Slegona placed second with 50-2. After a 21st-place bag of 15-12, he added 17-14 on Friday and entered Championship Saturday in third place. Matching Perkins’ final-round weight allowed him to rise one spot.

“I only had six to seven bites a day throughout the tournament,” Slegona said. “It was just all about timing. They turn on at different times and, every once in a while, you get the right rockpile with fish biting on it.”

“I got a little dialed in on Day 1,” George said. “I had a rough start and didn’t get a lot of bites, but late in the day, I got on a little area where it started happening for me.”

Brandon Palaniuk of Rathdrum, Idaho, leads the Northern Open standings with 392 points. Mike Iaconelli of Pitts Grove, N.J., is in second with 381, followed by Hugh Cosculluela of Spring, Texas, with 372, Alex Redwine of Blue Ash, Ohio, with 360 and Jacob Powroznik of North Prince George, Va., with 357.