RICHMOND, Va. — Keith Poche was equipped to do what no one else could do, and it helped him take over the Day 2 lead at the St. Croix Bassmaster Northern Open at James River presented by Mossy Oak Fishing with a two-day total of 41 pounds. 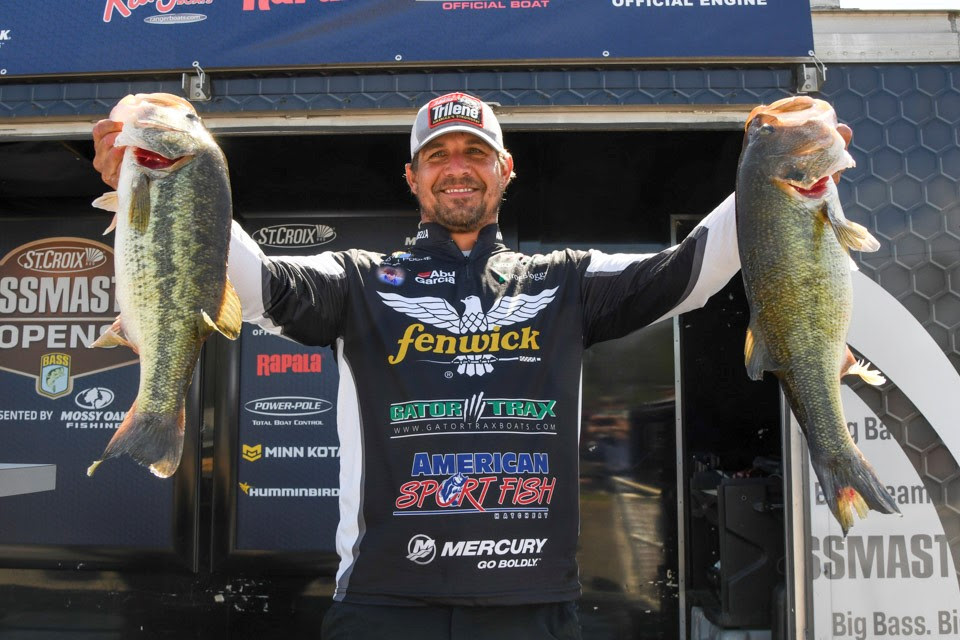 Hailing from Pike Road, Ala., Poche caught a Day 1 limit of 17-6 and tied Texas pro Randy Sullivan for 14th place. On Friday, he added 23-10 — the event’s second-heaviest bag — which was anchored by a 6-4 largemouth.

Committing to the far reaches of shallow tributaries, Poche fished out of a 17 1/2-foot Gator Trax aluminum boat with a 90-horsepower Mercury outboard. The lightweight vessel has low-water pickup, which allows Poche to run supershallow.

Poche left his push pole at home, so he improvised with a 2×4, using the simple tool to negotiate the tighter spots.

“I found a little deal in practice and I had a lot of bites on Monday,” Poche said. “I never went back (in practice), so I went back yesterday and caught a ton of fish. I should have had over 20 pounds yesterday, but it was really windy, they bit funny and a lot of fish just came unbuttoned.

“It slicked off today and I was really able to pick some stuff apart, really fine-tune it and really capitalize on some of those bigger bites. I quit early and left about 12 o’clock because I wasn’t doing myself any good culling a 3- or 4-pounder I may need (on Championship Saturday).”

Targeting a mix of cover in a foot of water or less, Poche was looking for spawning bass. He caught his fish on a Texas-rigged Berkley PowerBait The General and a Berkley Warpig lipless bait.

“I noticed that I did better when the tide was out, and I think that’s going to help me tomorrow,” Poche said. “When the water is low, I’m able to see those stumps and dark spots on the flat where they’re spawning and I’m able to pinpoint them. Yesterday, the wind was so bad, that I was just casting around.

“I lost so many yesterday because I was throwing a moving bait and they were just nipping at it. They weren’t really eating it; they were just running it off their bed. I had a lot of short strikes and that’s why they came off.”

With today’s improved visibility, Poche’s hook-up percentage was significantly higher. He caught one of his limit fish on the lipless bait and the other four on the Texas rig.

Timing was key for Poche, as he found bass moving up to the spawning locations later in the day.

“I went by a stump first thing this morning that had deep water pretty close, and I went by a couple of hours later and I saw a big fish up there next to a log,” he said. “I pitched over there and she ate it.

“I think that, as it warms up, they’re pulling up and getting ready to do their thing and backing off at night. They’re in the vicinity; it’s just catching them when they’re right there.”

Bassmaster Elite Series pro Kenta Kimura of Osaka, Japan, is in second place with 40-5. He added 23-5 Friday to the 17 pounds he caught on Day 1.

“After the Elite event on Chickamauga (April 7-10), I had less than three days to practice,” he said. “I spent a day and a half in the Chickahominy River (a major tributary downstream from takeoff), but it took me all day to catch 14 to 15 pounds.

“I figured just stay close and try to figure something out. I had two main areas; one was 10 minutes from takeoff and one was 30 seconds away.”

Relying on techniques he mastered on his home waters of Japan’s Lake Biwa, Kimura caught his bass on a large hard-body swimbait and a 3/8-ounce buzzbait with a prototype Berkley PowerBait creature bait.

“I just went back and forth between my two areas,” Kimura said. “Yesterday, I probably caught six keepers, but today I caught 20 keepers.”

Returning to the same creek scenario he fished on Day 1, Wetherell lamented the morning’s 80-minute fog delay, which cost him a critical morning bite.

“On tidal water, timing is everything, so having that delay definitely hurt me,” he said. “I’m definitely still around the fish, so I feel good about tomorrow.”

Wetherell fished a mix of reaction baits and targeted presentations with a jig and a Texas-rigged worm. During the higher tide stage, slowing down proved helpful.

Joey Murphy of Elkton, Md., is in the lead for Phoenix Boats Big Bass honors with his 7-11 largemouth caught on Day 1.

Focusing on shallow wood, Nealy relied mainly on a 5/16-ounce chartreuse/white spinnerbait with tandem gold and silver Colorado blades. Making contact with the hard cover was the key to getting bites.

“Every fish I caught except for one was on a spinnerbait,” Nealy said. “Around midday today, the spinnerbait bite slowed down and I needed one more keeper, so I went to flipping a craw bait and got my last one.”

Nealy’s first-round bag included an 8-2, which earned the $250 Phoenix Boats Big Bass award for the co-angler division. He also won the $500 St. Croix Rods bonus for being the highest finishing co-angler who fished with St. Croix Rods.

Saturday’s takeoff is scheduled for 6:30 a.m. ET at Osborne Park & Boat Landing. The weigh-in will be held back at the Landing at 2:30 p.m. Coverage is available on Bassmaster.com.

Visit Richmond and Henrico County, Va., are hosting the event.