JASPER, Ala. — Jacob Powroznik had one goal in mind when he signed up for the entire 2021 Basspro.com Bassmaster Opens schedule: requalify for the Bassmaster Elite Series. 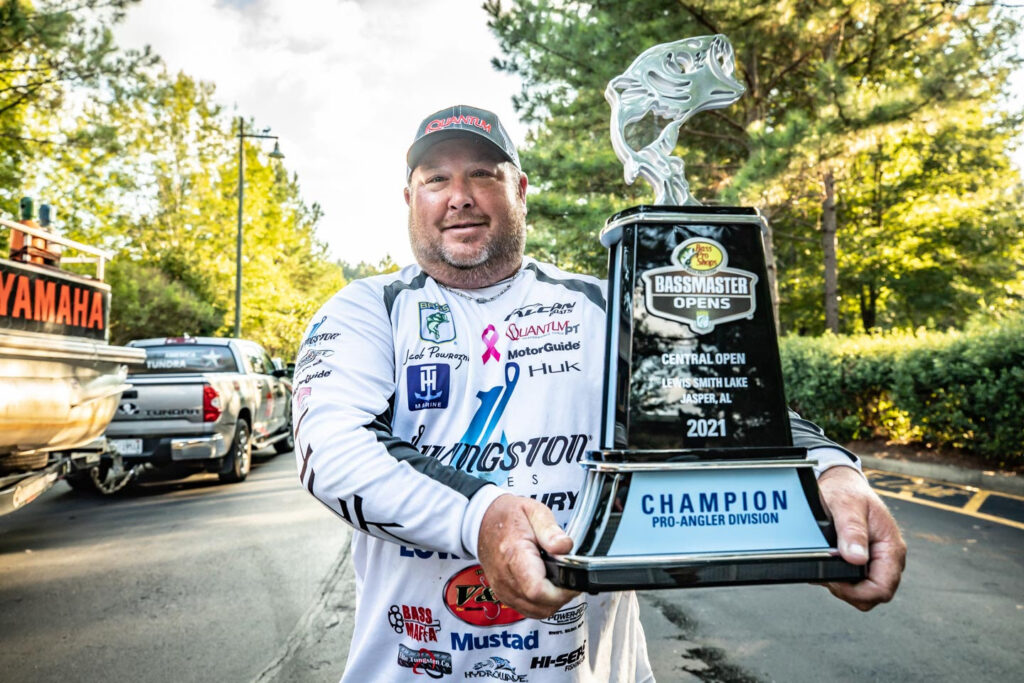 Saturday was another major step toward accomplishing that goal, as Powroznik rallied in the final round to win the second Central Open of the season, on Alabama’s Lewis Smith Lake, with a three-day total of 37 pounds, 9 ounces.

After catching 11-12 on Day 1 and 11-8 on the second day, the North Prince George, Va., native landed 14-5 of spotted bass on the final day, propelling him past Days 1 and 2 leader Nick LeBrun, who caught just three keeper bass on the final day to finish with a three-day total of 33-6.

Not only does Powroznik maintain his lead in the Falcon Rods Bassmaster Opens Angler of the Year standings, but he also punches his ticket to the 2022 Academy Sports + Outdoors Bassmaster Classic presented by Huk at Lake Hartwell. The win is his fifth in Bassmaster competition.

“It is a dream come true. That is what you fish for,” Powroznik said. “My best friend Hank (Cherry) has won it two years in a row, so now I’ve got something to shoot for. I put myself in to requalify for the Elite Series, and then to be able to come here and win this tournament is a blessing.

“It all kind of came together and I can’t wait to get to Hartwell. God is good and I love bass fishing.”

Powroznik’s pattern all week centered around standing timber in deep water areas where suspended spotted bass were feeding on blueback herring. Some of the trees he was fishing were in over 100 feet of water, but the bass were suspended only 20 feet deep.

“I was fishing in ditches that run into pockets and they had to have standing timber that was taller than anything else,” he said. “The thermocline was at about 35 feet this week, so those bass would never go below that.”

After experimenting with several techniques in practice, Powroznik settled on a V&M Drop Shad rigged on a 3/16- or 1/4-ounce jighead paired with a Quantum Smoke spinning outfit and 10-pound High Seas braid and an 8-pound fluorocarbon leader. He added his Lowrance Active Target units were essential as he could watch how the bass reacted to the bait as it fell to them.

“The technique is called tight-lining,” he said. “When I know it is going to fall right to them, I’ll hold my rod and it will pendulum down. It looks like a dying shad or a herring, whatever they are after. They didn’t want anything with a paddletail, they wanted it kind of clean and one of them was going to get it.”

“They would bite right off the bat and then there would be an hour or two lull,” he said. “Once it got to be around noon, that’s when they clustered around those trees a whole lot better. And then they would slack off toward the end.”

While there had been a couple of striper fishing boats in his areas throughout the tournament, Powroznik didn’t have very much fishing pressure around him throughout the week. When he arrived at his spot Saturday, there were a few more boats, but he was able to find success.

“I don’t ever say this, but I told my buddy that I might have found the winning bag of fish,” Powroznik said. “I ended up catching a big one right off the bat and then I caught another one. I am never sitting still, so I moved around and ended up catching another big one. They were bigger than the ones I had been catching all week.

“Being around the striper fisherman, they know what is in there and the stripers feed on herring and so do the big spots.”

“It was a great week,” LeBrun said. “Something changed with those suspended fish. It was tough to get bites and when they did they were small and I hadn’t had that problem all week. It seemed like the bait was up at the surface a lot more and I think that was due to the lack of boat traffic. When the fish were busting, I couldn’t catch them.”

Hometown favorite Jesse Wiggins finished in third with 33-3, jumping up from fifth place with a Day 3 bag that weighed 10-10.

“Overall, I’m not satisfied but I’m pleased,” Wiggins said. “It could have been a lot worse. I know how fickle it is and it could have been a really bad deal. I’m excited to be in the Top 10. It was a tough week and this lake doesn’t handle boat pressure really well, especially during a tough time of year.”

After a tough Day 1, Wiggins went all in on a largemouth pattern on Day 2 to catch 12-6 to get to the final day.

“The water cleaned up a little and I was able to grind out 10 pounds on Day 1,” Wiggins said. “I started on my river stuff Day 2 and they were biting. I caught them all on a Jackall Firecracker Buzzbait and then one on a squarebill.

“Today I went back up there and caught a few on a buzzbait and a couple on a shaky head and my second biggest one on a squarebill.”

With a 5-15 largemouth on Day 1, Brandon Ackerson won the Phoenix Boats Big Bass of the Tournament and earned $750.

With 1,371 points, Powroznik leads the Falcon Rods Bassmaster Opens Angler of the Year standings. Tommy Williams is second with 1,301 and Daisuke Aoki is third with 1,269.

Joseph Webster leads the Central Opens standings with 381 points while Jay Przekurat and Brandon Lester are tied for second with 378.

The final Central Open is scheduled for Grand Lake in Grove, Okla., Oct. 21-23. The final three Central Opens Elite Series invites will be awarded at the conclusion of that tournament as well as the invites from the overall Opens standings.

The Chamber of Commerce of Walker County hosted the event.