Practice Made Perfect for 3 Solid Days and the Big Check for $50,000 on Lake Winnebago.

Utilizing a one two punch of largemouth and smallmouth, Mallory rotated between flipping and drifting a dropshot in the current. Using a tactic he used back home, the Lawton, Michigan angler spent his practice period locating areas with populations of bluegills. With 14-pounds, 3-ounces on the final day, and a total weight of 42-pounds, 10-ounces, Buck Mallory takes the win at Wisconsin’s Lake Winnebago. 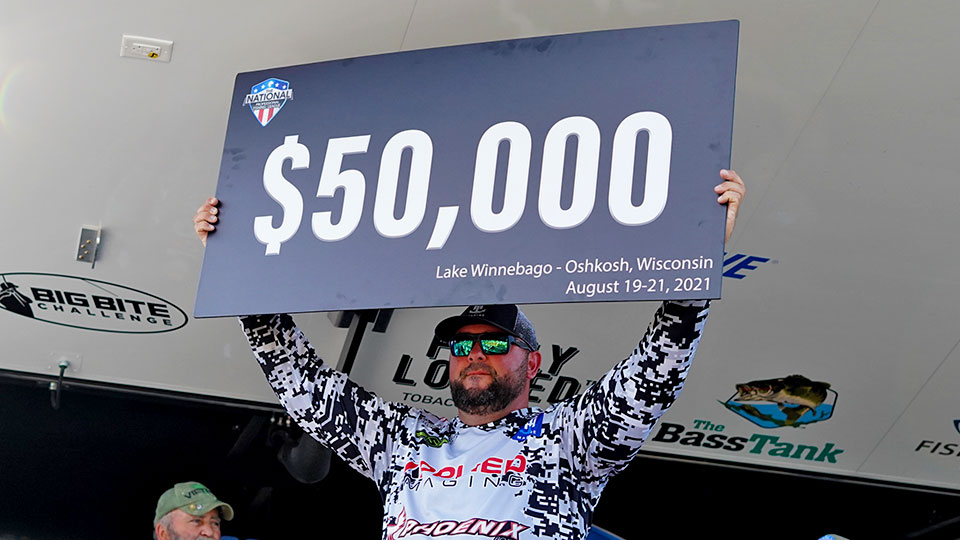 “I literally did textbook Junk Fishing – 101 this week. For the whole event, I fished pads, docks, grass clumps and even had a few smallmouth holes. My flipping technique was a Strike King Rage Bug and I used a Strike King Z tube with an Eco Pro Tungsten weight.”

The key to his success, the areas he had located in practice had lots of bluegills around. By shaking fish off, Mallory knew where fish were but had no idea the number of fish on his areas and was surprised to see it carry him for three days.

“I don’t know if these bass don’t get pressured or what, I was able to get them to bite 4 to 5 times before, even after I lifted them up to the surface. They were eating it so good and I hardly lost any fish all week. Today, I lost a 4-pounder. I don’t understand because they have been eating it so good.”

With a small fish in his bag, Mallory made a huge cull to end his day. With a 3-pounder to close out, it was a special week for the Michigan angler. Starting on the North end, Mallory would get a limit and work his way back down fishing high percentage areas.

“I am so blessed; I can’t believe it. When that fish broke and came into the bottom of the boat, I sat down and almost cried – it was god’s plan.” 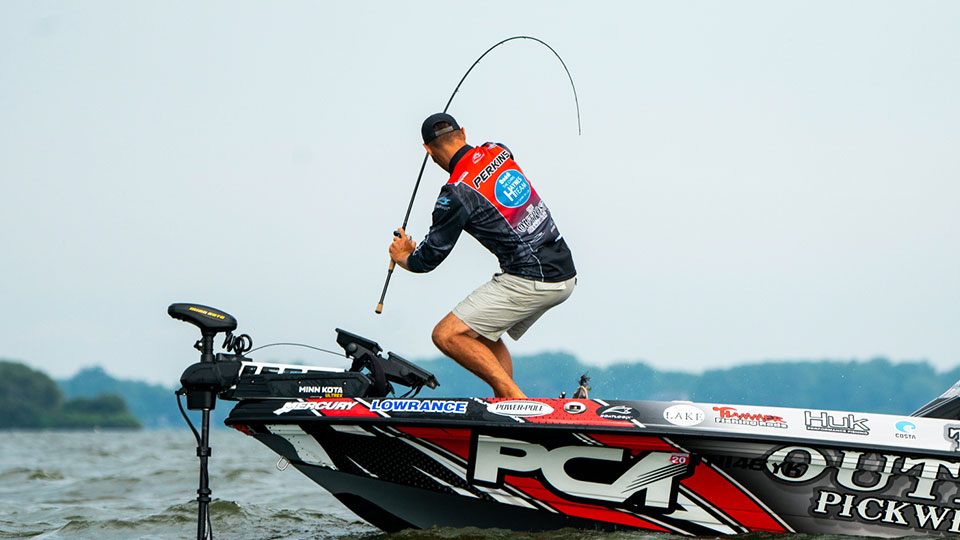 Waiting on the wind to blow all week, Brandon Perkins took advantage and landed the biggest bag of the week on the final day. Adding 17-pounds, 2-ounces to his total weight, the Counce, Tennessee angler managed a three-day total of 42-pounds, 6-ounces to finish in the 2nd place spot.

“I just needed some wind, man. On day one I had a 1.32 in my bag and lost two good fish. It was nice to have those fish bite today.”

Starting on a different area today than any of the other two days, Perkins went to work in a big way. With the wind blowing, he had hoped they would turn on, and the action began as soon as he made his first cast.

“As soon as I got there, I started catching them good. I moved around and caught fish on several places, and when you get to this weight, it’s so hard to cull.”

The day looked good on paper, but trolling motor issues kept Perkins in check the whole afternoon with only one way to fish – drifting.

“Man, it was done for the last 4-hours. It’s tough enough in the wind when you can troll around, but I was just drifting for like half the day. My thing all week was just throwing a Strike King football jig around with a Rage Craw trailer. I also mixed in a Strike King wobble head with a Structure Bug and even caught a few on a tube.”

Doing what he likes to do, Perkins committed to the off shore bite and rode the wave all week. With big rods, the Tennessee angler did what he needed to do both make the championship and keep the Progressive AOY race alive.

“I fished with big line, power fishing. I caught that big one and boat flipped it.” 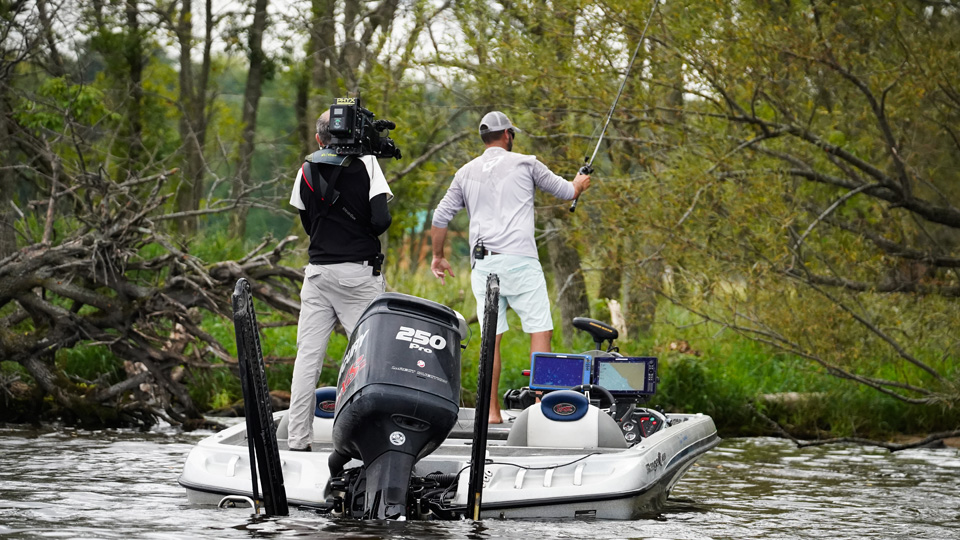 Going back to his trees on the final day, Paul Browning flipped up 14-pounds, 1-ounce to finish with a total weight of 42-pounds, 4-ounces and the 3rd place spot.

The Pecos, Texas angler worked grass edges for largemouth bass and mixed in an offshore bite for smallmouths. Saving a group of trees for the final day, Browning was almost able to make it happen. If it wasn’t for one of his tree’s being cut down on the water in front of him, who knows what that tree would have produced. 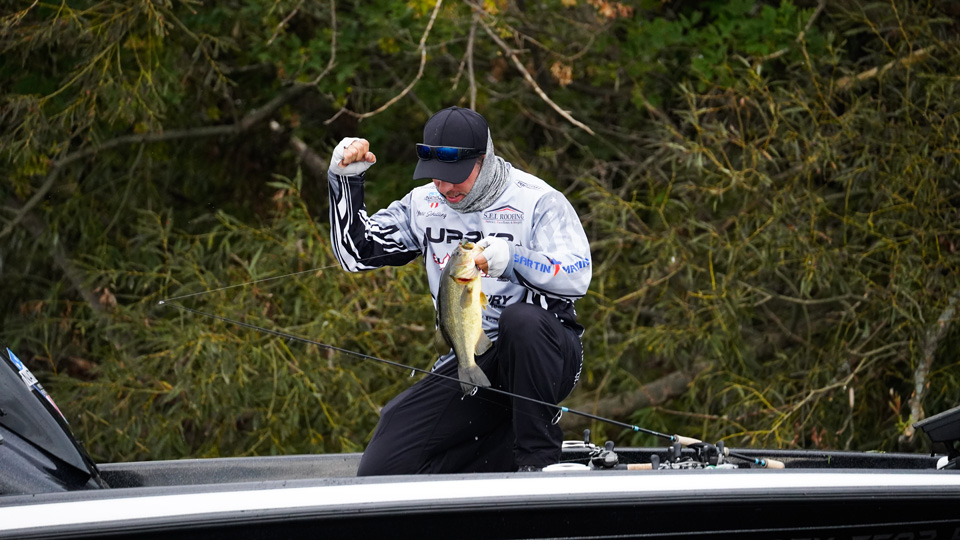 With 14-pounds even on Showdown Saturday, Marc Schilling caught a total of 41-pounds, 14-ounces over three days to finish the event in the 4th place spot. Fishing shallow cover all week, final day changes kept Schilling going and in contention for Progressive AOY.

“I had to make some changes today. I started throwing a senko around and got a small largemouth limit and then made a move to throwing a chatterbait in the mouth of a river. The smallies were loaded up and I lost a 5-pounder on it.”

With a 2.25-pound fish in the bag, that fish cost Schilling the event, but he isn’t too worried.

“My goal was to make the championship and try to win one of these things. It’s been a great year, great week, but I have lost too many fish – we’ll take it. I have never fished Grand Lake and I expect it to be a grind.”

The Tom Bean, Texas anglers flipped with a Googan Baits Bandito Bug with a ¼-ounce weight and threw a chatterbait to catch his fish this week. 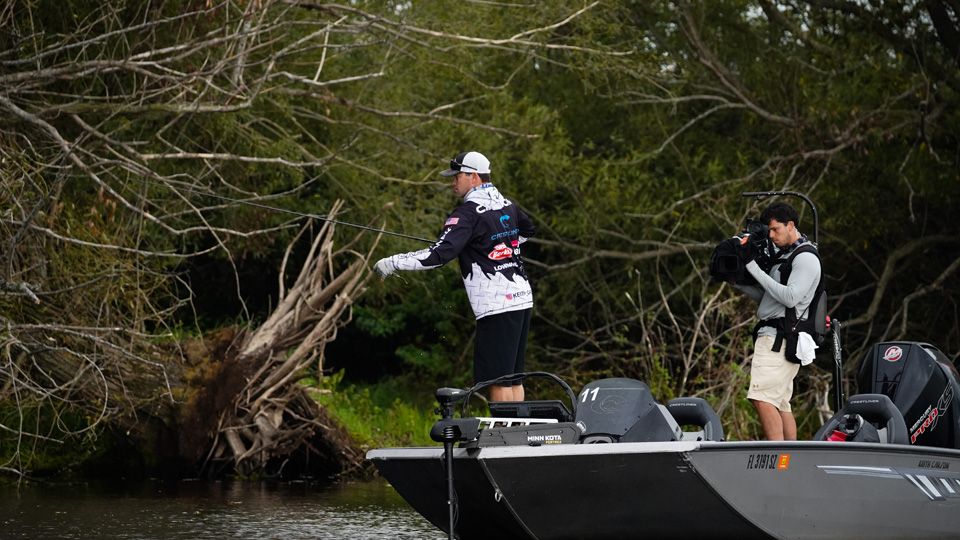 Keith Carson held the lead for the first two days and changing conditions affected his fish. With the water clearing and the fish more spread out, Carson was only able to add four bass to his live well for 9-pounds, 5-ounces for a three-day total of 39-pounds, 8-ounces.

“It was a crappy day, only four fish. I lost around 20 bass and they were not eating it good at all. The ones I caught were even barely hooked.”

“That Zenon rod was awesome. It was an overall great week, no complaints. I even caught a few on a Berkley Choppo like right in front of the trolling motor today, it was a weird day.”