MASSENA, N.Y. (Aug. 17, 2022) – Champions were stacked atop the leaderboard Wednesday at the Major League Fishing (MLF) Tackle Warehouse TITLE Presented by Mercury – the Pro Circuit Championship – in Massena, New York. But at the end of the day, it was a rookie atop the leaderboard. Pro Nick Hatfield of Greeneville, Tennessee, the reigning Polaris Rookie of the Year (ROY) brought a five-bass limit to the scale weighing 22 pounds, 1 ounce to grab the early lead in Group B following their Day 1 Qualifying Round. 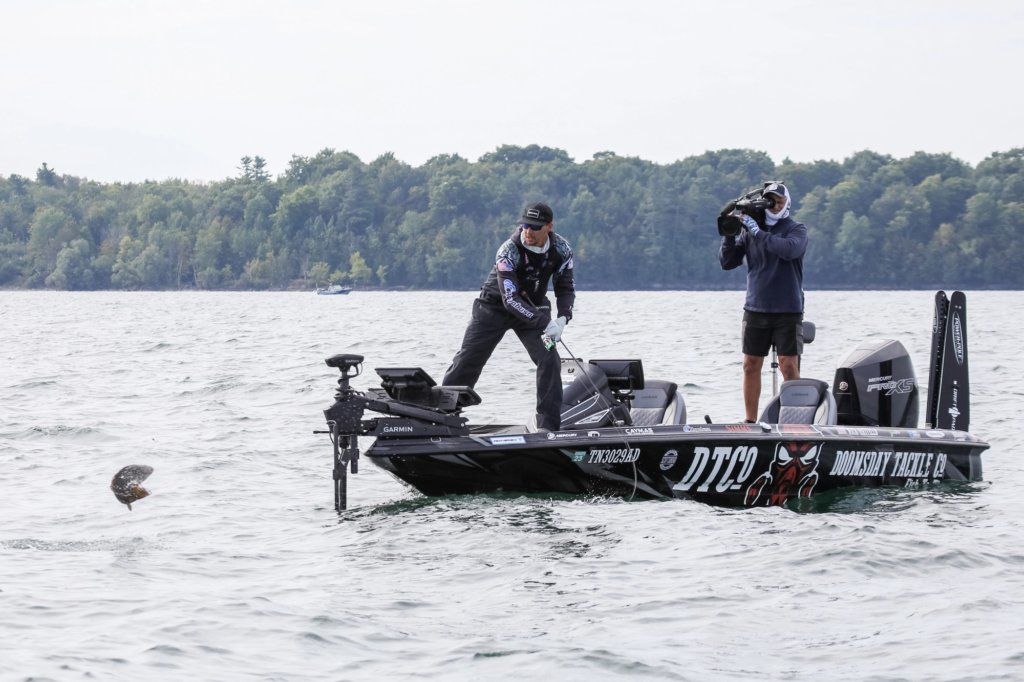 The 25 anglers in Group B will now have a day off on Thursday, while the 25 anglers in Group A will complete their two-day Qualifying Round of competition. Group B will conclude their Qualifying Round on Friday. The six-day event, hosted by the Town of Massena, showcases the top 48 pros in the 2022 Pro Circuit standings, along with last year’s reigning TITLE champion and reigning Angler of the Year – all competing for a purse of more than $800,000 and a grand prize of up to $235,000.

After a slow start to the day and an hour and 45-minute run down the river, Hatfield rallied late in the afternoon to finish atop the field at his first TITLE appearance. While he said he expected 20 pounds to be a reasonable target, the rookie said he certainly didn’t expect to bust 22 pounds on his first day.

“There are a ton of fish down where I’m fishing – I’ve probably seen 50 to 60 fish today, but only got 7 or 8 bites in there,” Hatfield said. “I’m not sure if they are pressured or it’s just the time of year. I dropped a camera down there during practice, and it was so thick in some places that the smallmouth were bumping into the camera. So, they are certainly down there. It’s just going to take some patience and making that long run every day to get to them.”

The Tennessee pro said he caught over 20 pounds in his area before deciding to make the long trek back toward Massena.

“Today was a good day – I had fun. Anytime I’m fishing for smallmouth, I feel like I can contend because I do it so much at home. But at a place like this where it’s so big, it’s a lot more difficult. I mean, so many different things have to go your way on the water, as far as getting there, getting back and just landing the fish.”

Hatfield said he is targeting big boulders in 35 to 45 feet of water and caught all his fish on a drop-shot rig, using five or six various drop-shot baits.

“There were 3 or 4 fish on one boulder, and 3 or 4 on another. I pulled up to one that had 12 fish on it, and I caught three or four of those and left the rest.

“There are a lot of fish down there that are just roaming and are out away from the rocks, but they are harder to catch. Most of the ones I caught are sitting right on or around a rock.”

When asked his game plan for Friday, Hatfield said he’s going all in on winning the Qualifying Round for his group and taking the automatic berth to the Championship Round.

“I couldn’t have expected anything better from today and with the long run I’m making to these fish, it just makes sense to try to go straight to the Championship Round,” Hatfield continued. “I’ve dreamed of doing this for a long time and winning ROY is still really surreal. But to be out here doing it, and seeing some success, is absolutely amazing. I’m super pumped about it.”

The standings for the 25 pros in Group B after Day 2 on the St. Lawrence River are:

A complete list of results can be found at MajorLeagueFishing.com.Overall, there were 123 bass weighing 437 pounds, 2 ounces caught by the 25 pros on Wednesday, with 23 five-bass limits.

The MLF Tackle Warehouse TITLE Presented by Mercury – the Pro Circuit Championship – features a hybrid tournament format. All 50 anglers are seeded into two groups of 25 – Group A & Group B, based on points earned in 2021 qualifying events – where they compete in Qualifying Rounds over the first four days of the tournament. Group A will fish again on Day 3, and Group B will fish again on Day 4, with total weight determined by the cumulative weight of their biggest five-bass limit from both days.

Anglers will take off at 7 a.m. ET each day of competition from the Massena Intake Boat Launch, located at 1415 State Hwy 131 in Massena. Weigh-ins will also be held at the boat launch daily at 3 p.m. The MLF NOW! broadcast team of Chad McKee, Marty Stone and J.T. Kenney will break down the extended action on all six days of competition from 7:30 a.m. to 2:30 p.m. Fans are welcome to attend the event or follow the action online through the MLF NOW! live stream and coverage at MajorLeagueFishing.com.
Along with the launch and weigh-in, fans and community members are invited to the MLF Fishing and Outdoor Expo on Saturday and Sunday, Aug. 20-21 from noon to 8 p.m. ET at the Massena Intake Boat Launch, where fans can meet the pros and check out the latest in fishing and outdoor gear. The expo includes live music, food trucks, kids’ activities, giveaways, fireworks and more.

The first 100 kids (10 and under) will receive a free rod and reel at the Expo on Saturday and Sunday and fans can register for a Polaris Sportsman 570 ATV giveaway onsite at the Expo. The winner will be drawn after the final weigh-in on August 21. PAW Patrol’s Skye and Marshall will also be at the event with MLF pro Charlie Evans and will be available for photos. Appearance times may vary. Visit MajorLeagueFishing.com for updates and more details.