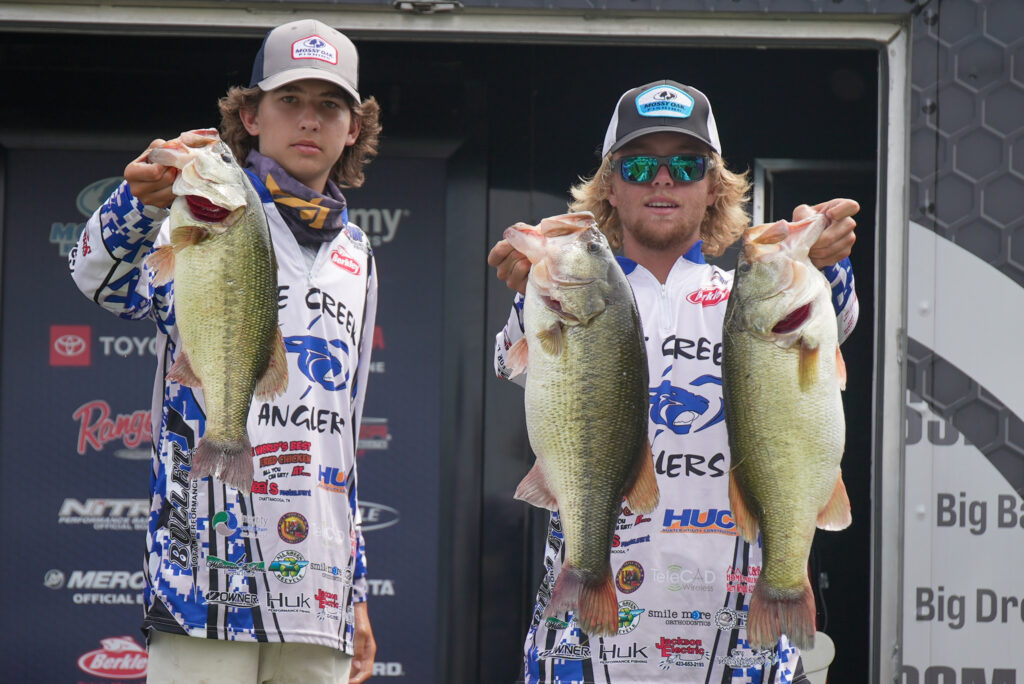 Shaw and King earned a $5,000 scholarship as well as the $2,000 Hunter Owens Big Bag of the Tournament scholarship presented by the parents of Hunter Owens, a former high school angler who died in a car crash. Drury University, Bryan College and Bethel University also presented the winners with scholarship opportunities to their respective schools.

Hayes White and Tiger Manuel from Sulphur High School in Louisiana finished second with 39-5, and the Backwoods Bassin’ team of John Nutt and Carter Nutt earned third with 37-9.

“This is the best thing that has ever happened to me, to be honest with you,” King said. “People don’t understand how hard fishing really is until you get out here and do it and do it all year. On our home lake, we had to put it together and figure it out. We know the fish that are there, it’s just timing when you can get them to bite.”

Shaw and King started the tournament with a disappointing 8-2, but they battled back on Day 2 and caught 16-9 to jump into fourth place and secure their spot in the championship round.

“We went home beating our heads in, thinking, ‘We are overthinking this. We just have to go fish,’” King said. “We tried something new and it ended up working for us.”

Along with some grassy areas, the Sale Creek team targeted springs on Chickamauga, using a jig, drop shot and a magnum spoon to trigger bites. Most of their weight on Day 2 and their 6-pounder on Day 3 were caught on the spoon.

“It’s something you can get to that is a little more sneaky,” Shaw said. “The fish load in it, and a lot of times there’s a lot bigger fish. They don’t get as much pressure as they do on ledges. It is something I have always done and you can go there and get bit quick.”

Shaw added that without Garmin LiveScope, the team wouldn’t have weighed in most of the bass they caught this week.

When Shaw arrived at Dayton Boat Dock on Championship Saturday, however, he said he had a ‘gut feeling’ that he and King needed to try a spot they hadn’t fished all week.

“It’s so tough right now and hard to stay consistent,” Shaw said. “You need to run new water. We started on a place we hadn’t fished all week. We caught an 8-5 and caught our third-biggest one.

“That got the momentum going for sure. At that moment, I knew if we could put two more 3-pounders in the boat we had a good shot. I had already beaten my goal for the day.”

From there, Shaw and King moved through several different grassy areas of the lake, filling their limit and catching multiple 4-pound fish, none of which helped their cause. Toward the end of the day, however, they moved back to the spring where they caught several big fish Friday and landed a 6-13 largemouth, pushing their bag over 20 pounds.

White and Manuel jumped from seventh to second on the final day thanks to a 16-pound bag, the second largest of Championship Saturday. Although they normally spend their time fishing shallow on their home lakes of Toledo Bend and the Sabine River, the Sulphur High duo fished out of their comfort zone this week, focusing their efforts on a hump around a bluff wall they found on the first day.

“We tried to start with topwater, but when the sun came up we went and fished a deep bluff bank,” Manuel said. “We were fishing the bank and we looked down at the graph and there was a school of big ones there. We had 12 pounds the first day from that.”

Once they located the school, they fished it every day of the tournament, mainly using a drop shot, a technique they seldom use back home. Those bass were also relating to the current and once that current kicked up, Manuel said the fish would move to the top of the hump.

On the final day, they went to their primary spot and did not catch a fish for several hours. Once the current increased, however, White and Manual landed a 5-pounder and a 7-12 largemouth. After that, the spot did not produce.

“I knew that spot had to fall apart sometime. We fished it all week and tried not to fish it out,” White said. “We had looked at some stuff yesterday before we came in and caught one that kept.”

Manuel upgraded one more time right before check-in by throwing a spoon around a marina, a technique he had never tried.

After not finding a big bite on Day 1, Carter and John caught 12-10 on Day 2 to sneak into the cut and then 15-8 on the final day to finish in third place. The duo caught around 15 bass total on the final day.

“We fished the same stuff and lucked into a big bite today and yesterday,” John said. “We had one the first day but we just didn’t get it in the boat. I’m just happy we were able to make it as far as we did.”

Whether it was in a creek or on the main lake, Carter said they were targeting schools of bass with a drop shot, a spoon and a football jig.

Along with their finish at this event, John and Carter won a state championship on Chickamauga a month ago and used their experience from that event to help them this week.

Connor Mason and Archer Reese from Meigs County High School secured Big Bass of the Tournament honors with the 8-11 largemouth they caught on Day 1, earning a $200 scholarship.