FOR IMMEDIATE RELEASE: BROOKELAND, TEXAS (Jan. 21, 2020) – FLW (Fishing League Worldwide) is set to kick off the new 2020 Tackle Warehouse Pro Circuit, professional bass fishing’s premier five-fish limit tournament series, this week, Jan. 23-26 with the Tackle Warehouse Pro Circuit at Sam Rayburn Reservoir. Hosted by the Jasper County Development District, the tournament will feature 155 bass-fishing professionals from around the world competing for a top award of up to $135,000 and valuable points in hopes of qualifying for the 2020 FLW TITLE, the Pro Circuit Championship. 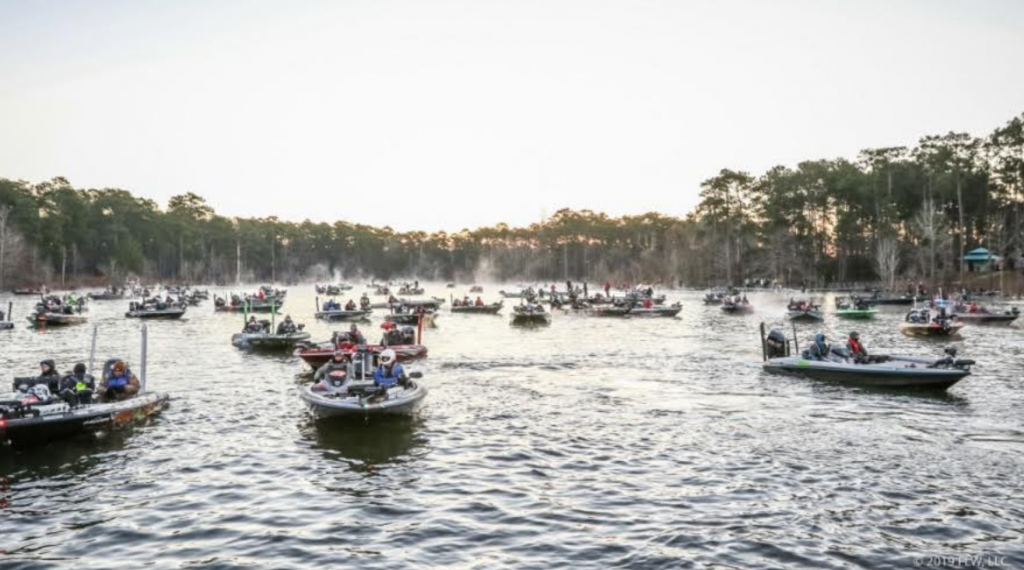 It’s been a year since FLW’s top level has been to Rayburn, and things should look a lot different this time around. Heavy rains in 2019 left the lake flooded for the majority of the season, including when FLW came to town last January. Because of that, the fish were stacked in certain ditches near whatever hydrilla could still be found, making it tough on much of the field. Pro Terry Bolton cranked two ditches to win with 91 pounds, 3 ounces total, but his day-two catch of 33-9 really helped carry him through the weekend.

Recently, the first Phoenix Bass Fishing League presented by T-H Marine event of 2020 took place on Rayburn earlier this month. Boater Kevin Lasyone took home the title with a weight of 20-8. Lasyone took advantage of sunny conditions and spent his time shallow near vegetation, catching his fish with a Rat-L-Trap and a V&M Thunder Shad swimbait with a Lazyman weighted swimbait hook.

Instead of the extremely high, dirty and cool water the field dealt with last year, Rayburn is currently about 2 feet below full pool and clear, with relatively high water temperatures. From a fishing standpoint, things should be pretty good, according to pro Jim Tutt, a 22-year FLW veteran.

“It’s going to be a lot different than last year, including water level,” said Tutt, who has nine career top-10 finishes on Sam Rayburn in FLW competition. “I think overall we’ll see more mid-range limits, like in the 15-pound range. I’m going to go out on a limb and say there won’t be as many big limits as we saw last year, but the fishing will be better overall. There are too many good anglers to not have a giant weighed.”

Tutt also expects quite the variety when it comes to tactics.

“The water’s been clear, and there isn’t a ton of hydrilla, so that could make the grass fish small, relatively speaking,” Tutt said. “We’ll see guys catching them anywhere from super shallow on the bank out to 40 feet. Last year there were areas where lots of fish were grouped in a small spot, but this year it’ll be more about running a pattern and having different areas. Both arms of the lake have been fishing good, and it should open the whole lake up and help spread people out. Everyone should have the opportunity to fish their strengths.”

The popular FLW Live on-the-water broadcast will air on Days Three and Four of the event, featuring live action from the boats of the tournament’s top pros each day. Host Travis Moran is joined by former FLW pro Todd Hollowell to break down the extended action each day from 8 a.m. to 2 p.m. On-the-water broadcasts will be live streamed on FLWFishing.com, the FLW YouTube channel and the FLW Facebook page.

For youth, the FLW Foundation’s Unified Fishing Derby will be held at the pavilion on Saturday, Jan. 25 from 1 p.m.-3 p.m. The event is hosted by Tackle Warehouse Pro Circuit anglers, and is free and open to anyone under the age of 18 and Special Olympics athletes. Rods and reels are available for use, but youth are encouraged to bring their own if they own one. The 1st and 2nd place anglers that catch the biggest fish will be recognized Saturday on the FLW Pro Circuit stage, just prior to the pros weighing in.

In Tackle Warehouse Pro Circuit competition, the full field of 155 pro anglers compete in the two-day opening round on Thursday and Friday. The top 30 pros based on their two-day accumulated weight advance to Saturday. Only the top 10 pros continue competition Sunday, with the winner determined by the heaviest accumulated weight from the four days of competition.

Throughout the season, anglers are also vying for valuable points in hopes of qualifying for the 2020 FLW TITLE, the Pro Circuit Championship. The 2020 FLW TITLE will be on the St. Lawrence River in Massena, New York, Aug. 8-13 and is hosted by the Town of Massena.