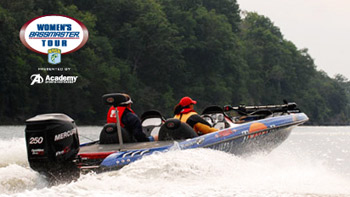 BASS announced today that, in 2009, the Women’s Bassmaster Tour presented by Academy Sports & Outdoors will visit fisheries in Louisiana, Alabama, Arkansas and Tennessee for its four regular-season events. Building on its landmark announcement before this past season, the circuit will continue to provide a direct qualifying berth into bass fishing’s premier event, the Bassmaster Classic.

“The WBT has made some great strides and continues to receive significant attention from media, fans and anglers,” said Jamie Wilkinson, senior director of event operations and business development, BASS. “We established the circuit to provide a tournament venue for an underserved market, and we are always looking to grow the profile of the format.”

The 2009 season will kick off March 26-28 out of Ouachita River and West Monroe, La. BASS previously has held events on Ouachita but the season opener will mark the first WBT event on the spacious fishery.

The second event will be held April 23-25 on Lake Neely Henry and out of Gadsden, Ala. The circuit last visited the Alabama fishery in 2008 and has visited Neely Henry three times in its three-year history. Pam Martin-Wells, a three-time WBT winner, took the 2008 event with a three-day total of 36 pounds, 1 ounce, which was enough to hold off Lucy Mize of Ben Lomond, Ark., by more than 10 pounds.

Next, anglers will compete June 4-6 on the Arkansas River out of Little Rock, Ark. The Arkansas River has hosted five BASS events, including two Bassmaster Classics. The WBT visit will be the first since a Bassmaster Major was held on the fishery in 2006. Mize, wife of Bassmaster Elite Series angler Jimmy Mize, figures to be the local favorite.

Finally, anglers will visit Old Hickory Lake on Sept. 10-12 out of Hendersonville, Tenn., for the fourth event of the season. Site of Bassmaster Elite Series and WBT events in 2008, Old Hickory yielded a three-day winning total of 36 pounds, 5 ounces to Dianna Clark at the June WBT event. Entry fees will be collected for all five events. Tournament payouts and rules can be found at Bassmaster.com/WBT. Once again, anglers will be able to drop their lowest finish from the four regular-season events before the regular-season standings are finalized and the Championship berths are decided.

The full schedule with hosts can be found below. While anglers are keeping an eye on the 2009 season, the 2008 season is in full swing. This week, WBT anglers will converge on Clarks Hill Lake and Evans, Ga., for the fourth event of the season. The Top 20 qualifiers for the WBT Championship will be determined in Georgia and the Championship event is slated for Oct. 23-25 on Arkansas’ Lake Hamilton.

The first stand-alone championship in WBT history will determine the 2008 Toyota Tundra Women’s Bassmaster Tour Angler of the Year, who will make history as the first female angler to qualify for the Bassmaster Classic. In addition, the AOY recipient will take home a Toyota Tundra. Academy Sports & Outdoors, a Katy, Texas-based sporting goods retailer, has reaped the benefits of sponsoring the WBT this past season.

“Academy Sports & Outdoors is pleased to sponsor the 2008 Women’s Bassmaster Tour,” said Jerry deBin, Academy’s director of outdoor marketing. “With 110 stores in 11 Southern states and growing, Academy is ideally positioned to support the WBT throughout the South, where bass fishing is a way of life. Academy already supports female athletes in our core business, and sponsoring the WBT is just one more way to show it.” Registration for the four 2009 regular-season events can be completed at Bassmaster.com. Priority registration is open to the top 50 pros and co-anglers in the 2008 Toyota Tundra Women’s Bassmaster Tour Angler of the Year standings at 9 a.m. ET, Monday, Nov. 3. Registration will open at 9 a.m. Monday, Nov. 10, for all BASS members who wish to sign up for all four regular-season events. Those who wish to sign up for single events can register beginning at noon Monday, Nov. 17.

Fans can visit Academy stores for additional information on the WBT and find out more about the organization at www.Academy.com.

The full 2009 schedule, including host city, local sponsors, dates and fisheries, can be found below.