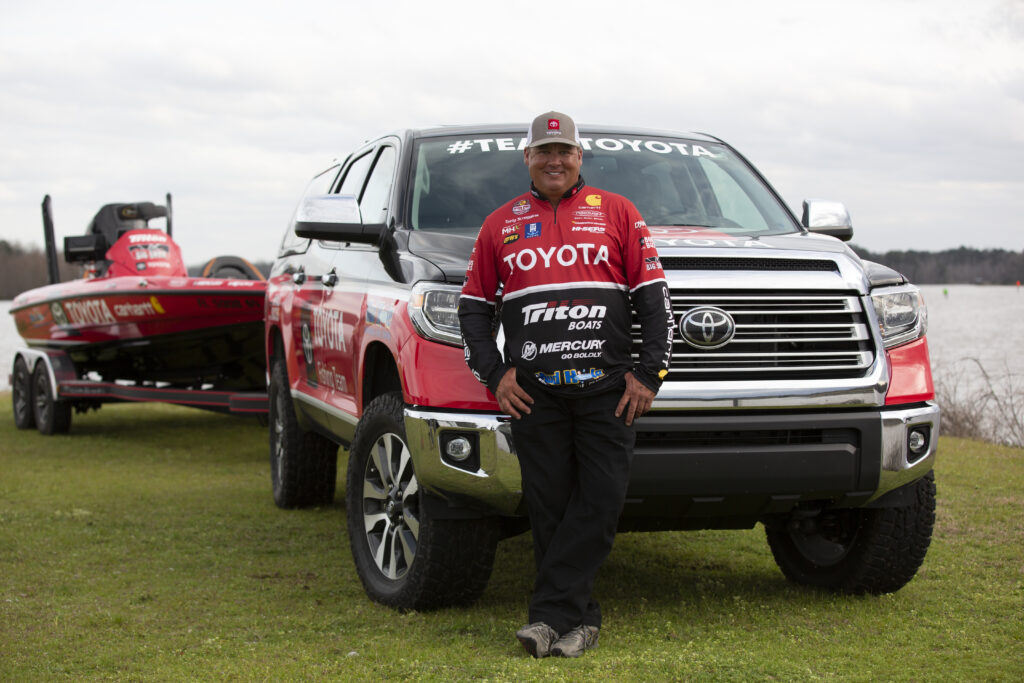 There have been plenty of changes during Scroggins’ stint as a pro fisherman, but treating others how he’d want to be treated, widespread respect from his peers, and loyalty to Toyota have remained constant themes.

Scroggins is a favorite among fans and competitors alike.  Whether he’s on the water competing, helping a fellow angler troubleshoot their equipment, or grilling up rib eye steaks for tournament staff you can bet Scroggins is wearing a Toyota hat and a smile.

“I’m proud to be a part of Team Toyota for a long list of reasons,” explained Scroggins. “Not only does Toyota support me, they support the fishing industry as a whole. They sponsor every major bass fishing league in the country and facilitate the Toyota Bonus Bucks program, which rewards anglers whether they’re a pro or a weekend warrior. If you fish, Toyota has your back.”

He said it is the reliability of his Tundra that would make it his choice regardless.  “I would be using a Toyota Tundra to tow my tournament rig across the country even if I wasn’t representing the brand,” said Scroggins.  “In order to make a living on a professional fishing trail, you have to show up no matter the conditions; my Toyota Tundra has gotten me there every time without anything other than standard maintenance; if only the fishing was that dependable.”

In between long hauls Scroggins has accrued over $2 million in tournament winnings, which includes five professional wins and eleven trips to the Bassmaster Classic. Pretty impressive for a former automotive painter turned full-time tournament angler, after local performances offered the opportunity to compete at a professional level. With his success, Scroggins gratitude and loyalty to his supporters has never waivered.

The Bass Pro Tour tournament season kicks off March 21st on the legendary Sam Rayburn Reservoir for Scroggins and his fellow competitors. This east Texas fishery is rich with fishing history and is famous for big bass. After undergoing a total knee replacement in the fall of 2020 to “fix his bad wheel”, Scroggins is excited to put on a “Big Show” in 2021.

About Terry “Big Show” Scroggins
Known as “Big Show” MLF angler Terry Scroggins has lived up to his nickname throughout his career.  the Florida native is a veteran of hundreds of professional fishing tournaments, Scroggins has claimed five victories, 47 top 10 finishes and earned more than $1.9-million in his professional fishing career, and was a member of the four-man team that won the very first Toyota Texas Bass Classic in 2007.  His sponsors include Toyota, Triton, Boat Mercury, Carhartt, Power-Pole, Mud Hole, T-H Marine, Stanford Baits, Minn Kota, Humminbird and Lew’s. Follow him on Facebook at https://www.facebook.com/bigshowscroggins, on Twitter at https://twitter.com/terry_scroggins and Instagram at https://www.instagram.com/bigshowscroggins.