Scroggins Says Now is the Time for Punching Bugs

Terry “Big Show” Scroggins has done it all. The generous Florida pro caught a 9-pounder out of a Toledo Bend brushpile on a drop shot rig, a 44-pound limit on Falcon Lake dragging a Carolina Rig across a submerged roadbed, qualified for 11 Bassmaster Classics, and has won $2 Million dollars in prize money. 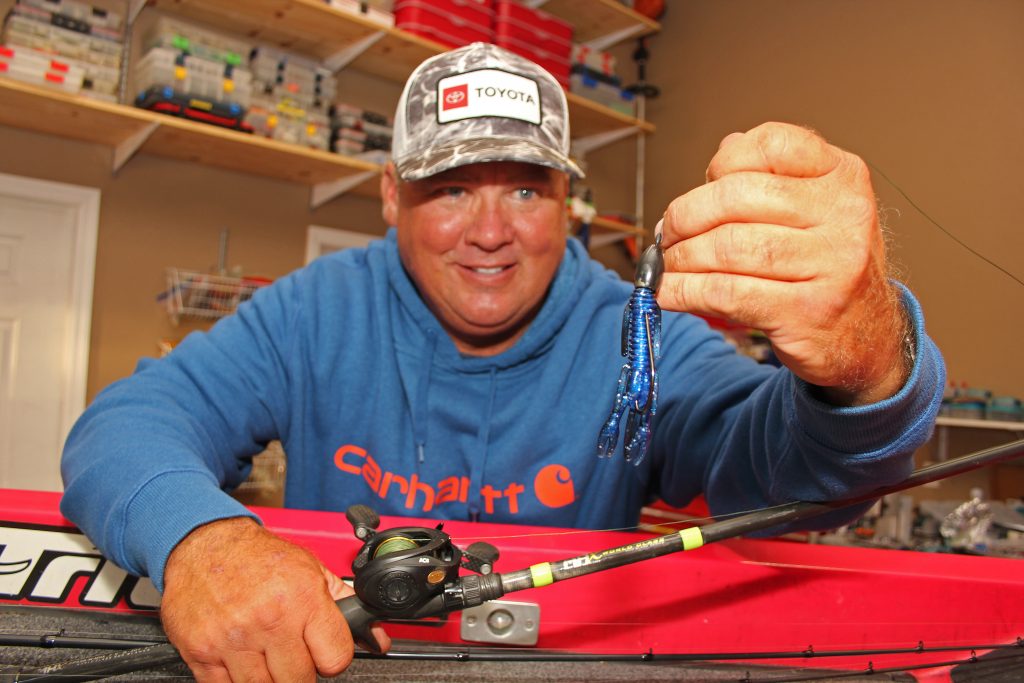 But when “Big Show” burst on to the pro bassing scene in 2001 – much of his momentum came from his supreme knowledge of pulling big fish from tremendously thick and matted vegetation. And according to Scroggins, right now – late autumn through winter is prime time for punching small soft plastics through the thick stuff.

“Everybody thinks of thick green summertime vegetation when you talk about punching shallow, but right now is the absolute best time to be punching the big weight through the mats,” says the former autobody tech.

“Whether you’re talking about Okeechobee, Kissimmee Chain, or even along the shoreline at a place like Lay Lake, Alabama, bass get in the matted vegetation because it holds heat during the coldest months of the year, and then serves as a pre-spawn staging area,” he explains.

In fact, one of his more famous exploitations of this pattern came during the chilly 2007 Bassmaster Classic on Lay Lake, AL when he caught 39-pounds of bass from the shallow matted vegetation around the shoreline in that late February event … even though water temps were in the 50s.

This is the ultimate in heavy cover, big equipment bassin’ – so Scroggins uses a 7’ 9” heavy action rod from Mud Hole, spools up with 65-pound braid, and uses a 1.5-ounce weight in front of the 3.25” Big Show Soft Plastics Punch Bug. Asked to choose his all-time favorite color, he cited black/blue with silver fleck.

Relate to the roots

“The water willow and other grass at Lay had a vine in it that thickened up the canopy to make it even better. Roots are key to this pattern. Roots beneath the canopy act the like corner posts on a shaded boat dock,” explains Scroggins.

“This bite can change daily based on the weather,” says Scroggins. “Typically, they’ll eat the Punch Bug while it’s falling, but if a cold front comes through – you may have to pick it up and kind of hold it still against the underside of the canopy until one grabs ahold of it,” he says.

Scroggins ends his tutorial on wintertime punchin’ by warning not to make the biggest mistake most anglers do with this pattern. “Most people jerk way too fast when they get a bite in the mats. Let the fish pull it down just a bit and you’ll catch 90% more fish than if you jerk like you’re trying to club ‘em with a big jig in a flooded bush,” he warns.

And should you make that common mistake – let the area rest – come back a couple hours later – and there’s a real good chance that same fish will bite again in the exact same patch of grass.