While Short’s execution was nearly flawless through the weekend, his preparation and homework before to the tournament helped him claim his third BASS career victory, his first Elite Series win.

For 15 years, Short has sharpened his fishing chops on the Arkansas River, a fishery he believes translates well to fishing the Mississippi. Furthermore, Short took a scouting trip last September to the Mississippi and scoured the fishery for two days.

“This week was like going back in time to when I first started tournament fishing,” said Short, 47. “I just feel comfortable on river systems. There are certain anglers who know and understand rivers and will always be able to perform well there, and I consider myself one of those people.” 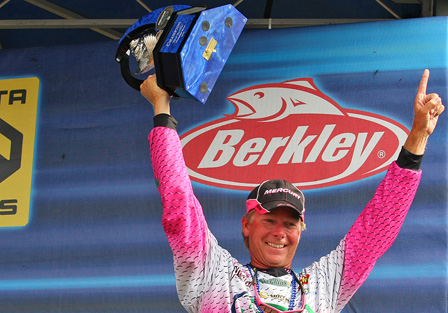 Heading into Sunday, Short was in a distant sixth and needed to make up a deficit of almost 5 pounds. Early, things didn’t look good. By 1 p.m. and with little time left in his competition day, Short had only landed three keepers. But he stuck to his guns, knowing the area would get hot.

His faith paid off. For nearly one hour late in the day, Short landed the majority of his weighed fish, primarily throwing a Zoom WEC E-1 crankbait in chartreuse classic color. That lure, he said, was the most important in his arsenal, which also included a Zoom speed craw and a ¼-ounce spinnerbait.

Rotating between two areas — what he called backwater slews — Short targeted laydowns. He would run his pattern on his primary area for about three hours, then move to a secondary area for a few hours before finally returning to the primary area. He duplicated this through all four days for a five-fish limit each day.

The victory, worth $100,000 to Short, also put him in an enviable position in the Toyota Tundra Bassmaster Angler of the Year standings. With one event remaining in the Elite Series regular season, he is 10th, which virtually assures a qualifying berth into the 2010 Bassmaster Classic set for Feb. 19-21 on Lay Lake out of Birmingham, Ala.

If Short holds his position, he would also earn a berth into the inaugural Bassmaster Elite Series postseason, the Toyota Trucks Championship Week. The postseason, set for Sept. 10-18, will be played out on two productive Alabama fisheries.

The first of the two postseason tournaments will take place on Lake Jordan out of Wetumpka; the finale, the Evan Williams Bourbon Trophy Triumph, is slated for the Alabama River from Montgomery. Only the top 12 anglers in the AOY standings will qualify. 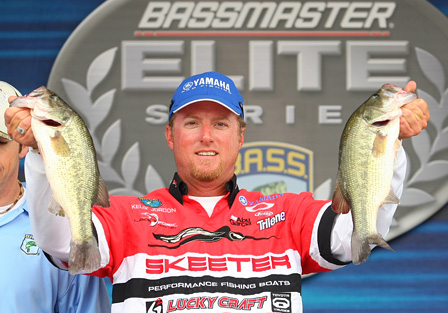 Jordon also made an impressive charge — from eighth to second. Ultimately he couldn’t catch Short, but he said he did have a fish on that could have made the difference.

“I lost a 3-pounder yesterday that just killed me,” said Jordon, 38. “That would have made the difference.”

Like Short, Jordon is always a factor on river systems, having previously scored an Elite victory on the Potomac River in 2006. Also costly to Jordon on Sunday was his bait selection. Through the week, Jordon had primarily flipped a craw tube to cover. He continued to do so Sunday.

After a slow morning, he decided to switch things up and fired a crankbait to an area where the water depth significantly changed. He caught four bass on three casts and, though it was a nice adjustment, lamented that he didn’t make the switch sooner.

While he was disappointed, Jordon took solace that he is seventh in the AOY standings and like Short is in good position to advance to the inaugural postseason.

A serious stumble by Day 3 leader and Elite Series rookie Billy McCaghren, also of Mayflower, Ark., opened the door for Short and Jordon. 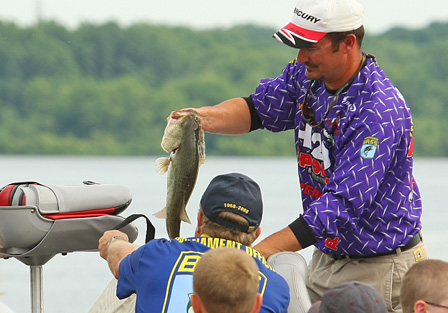 After a strong first three days, McCaghren brought just 6-3 to the scales Sunday. The water depth had dropped in his primary area, he said, and it was enough that he felt the bite was significantly altered. McCaghren landed only three keeper bites and failed to boat a few others that he felt would have won the tournament for him.

This was the first Elite event in which McCaghren was in contention, and it was a learning experience for the 35-year-old.

“I learned a ton this week,” he said. “And I don’t think I could have fished any better than I did. But it hurts so bad to be this close and come up empty.”

Finishing fourth was Tommy Biffle of Wagoner, Okla., with 40-0, and Stephen Browning of Hot Springs, Ark., rounded out the top five with 39-10.

In contrast to the past two Elite events — staged on big-bass factories Lake Guntersville and Kentucky Lake — the tough, grind-it-out affair on the Mississippi registered the lowest winning weight to date for an Elite Series event.

During the 2008 season, the Elite Series had to cancel the River Rumble in Fort Madison because of flooding along the river that affected nearly a dozen states. This was the first top-tier BASS tournament on the river since 2006.

With its sponsorship of the event, Genuity donated $1,506 to the Community Services Food Pantry of Fort Madison. Elite anglers reeled in 1,506 pounds of bass this week and Genuity matched each pound with $1 for the sponsor’s generous donation.

Up next, the Elite Series regular season culminates with the August 13-16 Champion’s Choice on Oneida Lake out of Syracuse, N.Y. At Oneida, the lineup will be determined for the top 12 anglers who will compete in the inaugural Bassmaster Elite Series postseason for a shot at the 2009 Toyota Tundra Bassmaster Angler of the Year title.

Fishing fans can catch all of the on-the-water action from the River Rumble on The Bassmasters, Saturday, June 20, at 9 a.m. ET on ESPN2. The daily weigh-ins for all regular-season Elite events and the two postseason events will air live on ESPN360.com, ESPN’s broadband sports network, while a wealth of unique content will also be available at Bassmaster.com.