WETUMPKA, Ala. — Bethel University senior and overall top seed Tristan McCormick and Auburn University sophomore Tucker Smith, the No. 2 seed, both won their individual matchups Sunday to advance to the final round of the Carhartt Bassmaster College Classic Bracket presented by Bass Pro Shops on the Coosa River. 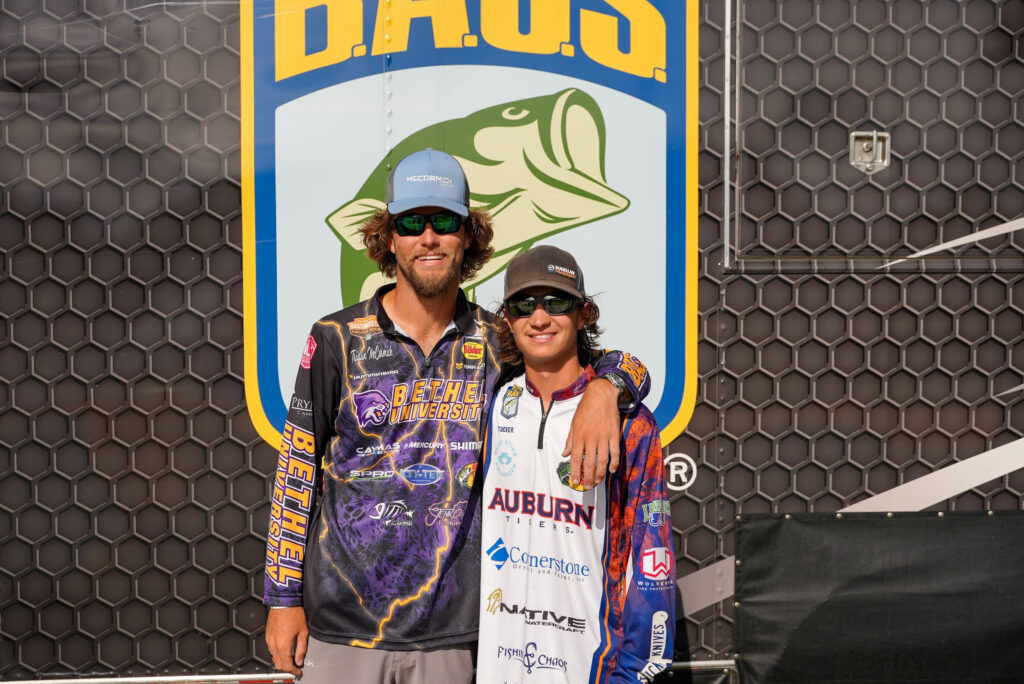 McCormick led all anglers in total weight during the semifinal round, securing 10 pounds, 14 ounces to beat Auburn’s Conner Crosby, who landed a 6-11 limit.

“It hasn’t even hit me yet. I’m just trying to enjoy each and every moment,” McCormick said. “It is my last (college) tournament and that makes it pretty special to make it to the final day and shoot it out with Tucker, one of my best friends. We know each other pretty well. It’s going to be a fun one for sure.”

Unlike Day 1 where he missed on several opportunities for big bites, McCormick fished clean throughout the semifinals.

“Everything I hooked I kept on,” he said. “That was a key thing, especially when you aren’t getting that many big blow-ups. Those 2-pound and above sized fish are what separates you and they are hard to come by. So, when you hook one, you have to take your time and be careful with it.”

He started the day with a couple of nice bites, including a 3-2 largemouth that set the tone.

“It was slack water and the current wasn’t supposed to turn on until 10 a.m., but it turned on within 30 minutes of me being there,” McCormick said. “I let the current get back out there and let everything set up and started fishing the seams and caught several. No more big ones.”

With his limit filled before the halftime break, McCormick said he started looking for the better than average largemouth after the break.

“The cloud cover and the rain was a big deal for me after I left the dam,” he said. “I relied on that and knew it was going to be cloudy all day so I shot out (away from the dam). I felt like it was the right thing to do and went and did what I do comfortably, which is throw a Spook.”

If conditions are similar on Championship Monday, McCormick said he is confident in his strategy.

“If it is cloudy all day tomorrow I know what I’m going to do,” he said. “These fish need cloud cover to be active on topwater. Every day I have gone out and gone at it the same way.”

Meanwhile, Smith caught 7-11 Sunday to edge Bethel University angler Stevie Mills by over a pound. The day did not start smoothly for the three-time high school national champion, however.

“After fishing the first day, this morning I got a little bit nervous and it all sank in,” Smith said. “I missed a bunch of fish this morning and some good ones. I had to calm down and sit down, retie my baits and get more focused. Once I got focused I caught some fish.”

When he arrived at his first spot, Smith said he lost five or six fish before moving to his next area. After losing one or two there, he recovered and secured a limit of mostly spotted bass that powered him past Mills.

“I started culling up and then I caught a decent one,” he said. “I fished around and caught a bunch of fish, just didn’t catch that 3-plus pound size. That’s what I’m looking for tomorrow.

“I’m just going to look for big ones all day. You are going to have to catch them tomorrow to win, and I’m going to try and have fun and whatever happens, happens. I’m super blessed to be able to make it this far in the tournament.”

Anglers will take off at 6:30 a.m. CT and will conclude their day at 2:30 p.m. Bassmaster College Classic Bracket LIVE presented by Bassmaster Fishing 2022, the Official Video Game, will stream live on Bassmaster.com and the FOX Sports digital platforms beginning at 7 a.m.

The winner will earn a spot in the 2022 Academy Sports + Outdoors Bassmaster Classic presented by Huk at Lake Hartwell, plus paid entry fees into the 2022 Basspro.com Bassmaster Opens with the use of a fully rigged Nitro and Toyota Tundra.