GUNTERSVILLE, Ala. (May 12, 2022) – Bluebird skies and a calm breeze created a variety of options for 156 of the world’s best bass fishing professionals throughout Day One of the B&W Trailer Hitches Stop 4 on Lake Guntersville Presented by A.R.E. With bass in various stages of the spawn, anglers could pretty much pick their poison, targeting fish on beds, chasing the shad spawn and firing up offshore schools, which is where pro Spencer Shuffield of Hot Springs, Arkansas racked up a limit weighing 25 pounds, 6 ounces to grab the early lead after Day One. Shuffield ended the day with a 3-pound, 4-ounce advantage over Dayton, Tennessee’s Michael Neal, the 2021 Tackle Warehouse Pro Circuit Angler of the Year (AOY), who finished the day with a five-bass limit weighing 22 pounds, 2 ounces, good for second place. 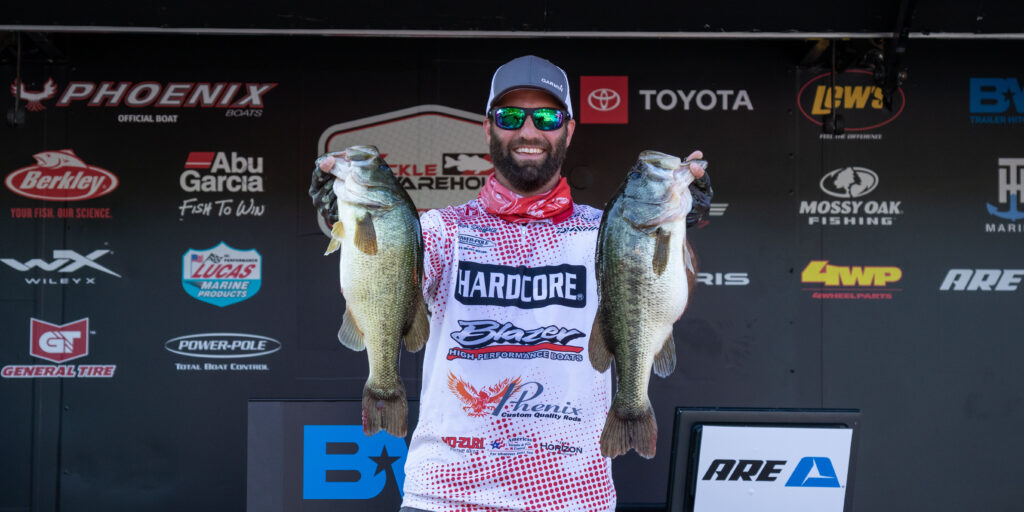 The Pro Circuit competition awards a top prize of up to $135,000 and marks the fourth of six regular-season Pro Circuit events offering competitors a total purse of more than $850,000.

“Today was really good,” Shuffield said. “I found four big schools during the last afternoon of practice. I pulled up on the first one and caught an 8-pounder. As I was reeling that one in, about a hundred more fish came up and were schooling – and probably 30 of those were over 6 pounds.”

Shuffield said he chose not to start the day on his honey hole because no other anglers were on it and he wanted to keep it that way, so he went to work on one of the other schools that were firing early this morning.

“I caught a few there, but then I went back to that big school I found in practice and had over 25 pounds within eight casts,” Shuffield said. “I jumped off a 9-pounder as well, so it’s definitely the winning spot, no doubt. It’s just a matter of who gets on it over the next two to three days.”

Although the spot was empty right after takeoff, Shuffield said there was a local angler fishing there when he pulled up later that morning.

“He was so great and let me move into the spot,” Shuffield said. “I did see Alex Davis over there after I left today, and I watched him pull a couple 4-pounders out of it, but I know he lives here and knows the lake – and probably that spot – so I’m pretty sure he’ll fish it smart too.

“It wouldn’t bother me if [Davis] pulled up on it and caught another 20 pounds out of it. There are that many fish there – you can see hundreds of them on the Livescope and they are biting,” Shuffield continued.

With the weights zeroing after Day Three, Shuffield said his only fear is blowing out the spot too early in the event, and although he feels it might be better to just leave it alone for a few days until he needs it, with 11 bags weighed in over 20 pounds on Day One alone, staying ahead of the pack may prove to be a challenge.

“If the weights didn’t zero before Championship Sunday, I would hammer down on them the next two days for sure, but I’ve got to be a little strategic about it,” Shuffield said. “I’d hate to pressure it the next two days, then be hurting during the final round, but honestly I’ve got a good enough shallow bite going that I can go catch 15 pounds really easily doing that.

“I figure if I can just catch 14 to 15 pounds the next two days, I can make the top 10, then this spot would be fresh and I could pull up there on the final day,” Shuffield continued. “There’s potentially a 30-plus-pound bag there for sure, so I really want to try to save that spot for the championship round.”

Shuffield said although he has options deep or shallow, he caught all his fish on Day One offshore, fishing ledges, on a Duel Hardcore Bullet Crank 7+.

“That’s a new crankbait that just came out at ICAST last year,” Shuffield said. “It gets down to 26 feet on 14-pound fluorocarbon and you can throw it really far, but we haven’t visited any fisheries where I’ve been able to throw it.

“The fish I’m targeting are in about 22 feet of water, so getting that crankbait down to that depth is key,” Shuffield continued. “The bass just aren’t used to seeing crankbaits that deep, so that’s the deal, for sure.”

The top 20 pros after Day 1 on Lake Guntersville are:

In Tackle Warehouse Pro Circuit competition, the full field of anglers compete in the two-day opening round on Thursday and Friday. The top 50 pros based on their two-day cumulative weight advance to Saturday. Only the top 10 pros continue competition on Sunday, where weights are zeroed, and the winner is determined by the heaviest weight from the final day of competition.

Throughout the season, anglers are also vying for valuable points in hopes of qualifying for the 2022 Tackle Warehouse Pro Circuit TITLE Presented by Mercury, the Pro Circuit Championship, where they will compete for up to $235,000. The 2022 TITLE will be on the St. Lawrence River in Massena, New York on Aug. 16-21, and is hosted by the Town of Massena.

Anglers will take off at 6:30 a.m. CT each day from the Lake Guntersville State Park, located at 1155 Lodge Drive, in Guntersville. Weigh-ins will also be held at the park daily at 2:30 p.m. Fans are welcome to attend the event or follow the live on-the-water action all four days of competition online on MLF NOW! beginning at 7 a.m. CT at MajorLeagueFishing.com.