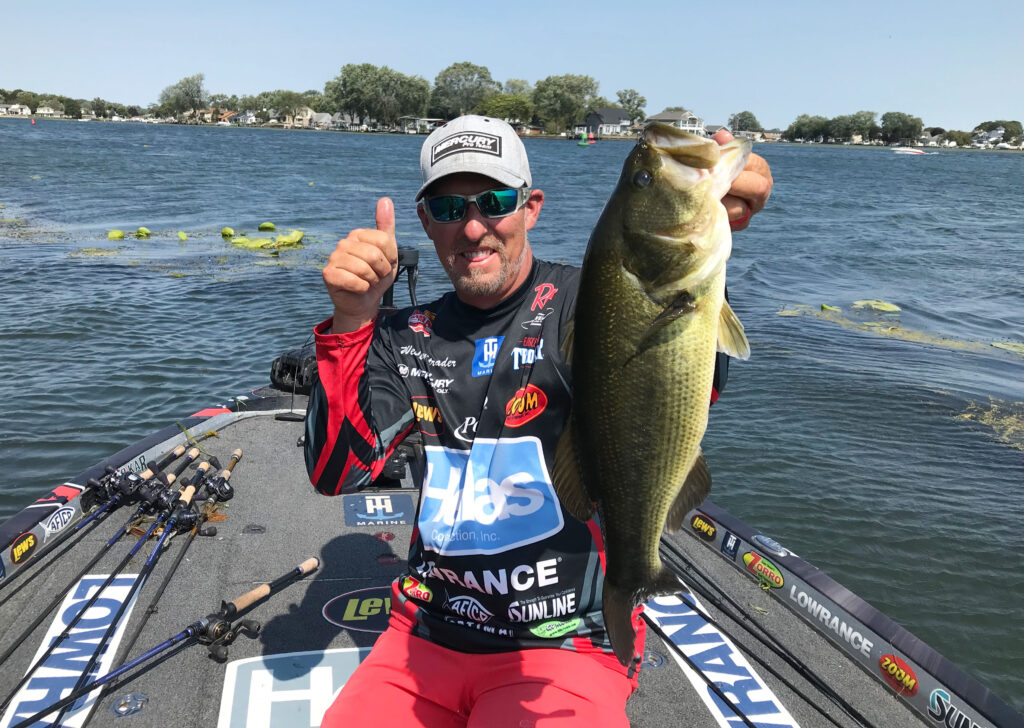 Strader’s two-day total of 64 bass weighing 166 pounds, 8 ounces earned him the round win by a 36-pound, 1-ounce margin and advances him directly into Wednesday’s final-day Championship Round of competition. The six-day tournament, hosted by Macomb County, St. Clair Shores and the Detroit Sports Commission, showcases the 80 top pro bass-fishing anglers in the world competing for a purse of $805,000, including a top cash prize of $100,000 to the winner.

While Lake St. Clair is widely-known as a world-class smallmouth bass fishery, Strader has done his damage this week targeting solely largemouth.

“Finally! I’m so happy to win one. Golly bum, that is so hard to do,” Strader said in his post-game interview. “I tell you what’s even harder, though – I went against the grain and did it with the wrong species. What a great two days of fishing it has been.”

Like Day 1, Strader spent most of his day fishing shallow, alternating between a Z-Man Evergreen Jack Hammer ChatterBait paired with a Zoom Z-Swim and a Neko-rigged Zoom Zlinky.

“I don’t know what’s up with that spot – just more and more fish keep getting on it,” Strader continued. “I know it’s probably going to get played out, but I’m looking forward to getting back out there on Wednesday and seeing how this shakes out.”

The remaining 38 anglers – 19 from Group A and 19 from Group B – will now compete Tuesday in the Knockout Round, where weights are zeroed, and the anglers compete to finish in the top eight to advance to Championship Wednesday. Wednesday’s Championship Round will feature Group A winner Michael Neal, Group B winner Wesley Strader, and the top eight anglers from the Knockout Round competing in a final-day shootout for the top prize of $100,000.

The top 20 pros in Qualifying Group B that now advance to Tuesday’s Knockout Round on Lake St. Clair are:

The 40 Anglers in Group A competed in their two-day qualifying round on Lake St. Clair on Friday and Sunday – the 40 anglers in Group B on Saturday and Monday. Now that each two-day qualifying round is complete, the anglers that finish in 2nd through 20th place from both groups advance to Tuesday’s Knockout Round, while the winner of each group advances directly to Wednesday’s Championship Round. In tomorrow’s Knockout Round, weights are zeroed and the remaining 38 anglers compete to finish in the top 8 to advance to the Championship Round. In Wednesday’s final-day Championship Round, weights are zeroed and the highest one-day total wins the top prize of $100,000.

Anglers will take off from the 9-Mile Ramp, located in St. Clair Shores, at 8 a.m. ET each day of competition. With strong winds being forecast for Tuesday, Bass Pro Tour Tournament Director Aaron Beshears has decided to allow Knockout Round competitors to trailer their boats. Anglers must remain at the 9-Mile Boat Ramp until 8 a.m. and then will be allowed to depart to the desired launch ramp of their choosing.

The General Tire Takeout ceremonies will also be held at the Launch Ramp, beginning at 5 p.m. each day. Fans are welcome to attend all takeoff and takeout ceremonies and also encouraged to follow the event online throughout the day on the MLF NOW!® live stream and SCORETRACKER® coverage at MajorLeagueFishing.com.

The MLF NOW!® broadcast team of Chad McKee, Marty Stone and J.T. Kenney will break down the extended action each day of competition from 8:45 a.m. to 5:30 p.m. ET. MLF NOW!® will be live streamed on MajorLeagueFishing.com and the MyOutdoorTV (MOTV) app.