To most fans, anybody making a living in the professional bass fishing business has the coolest job in the world. But what gets overlooked so often is the loneliness of being away from home and the people you love hundreds of nights a year. And few miss home and his three girls more than top pro Matt Arey. 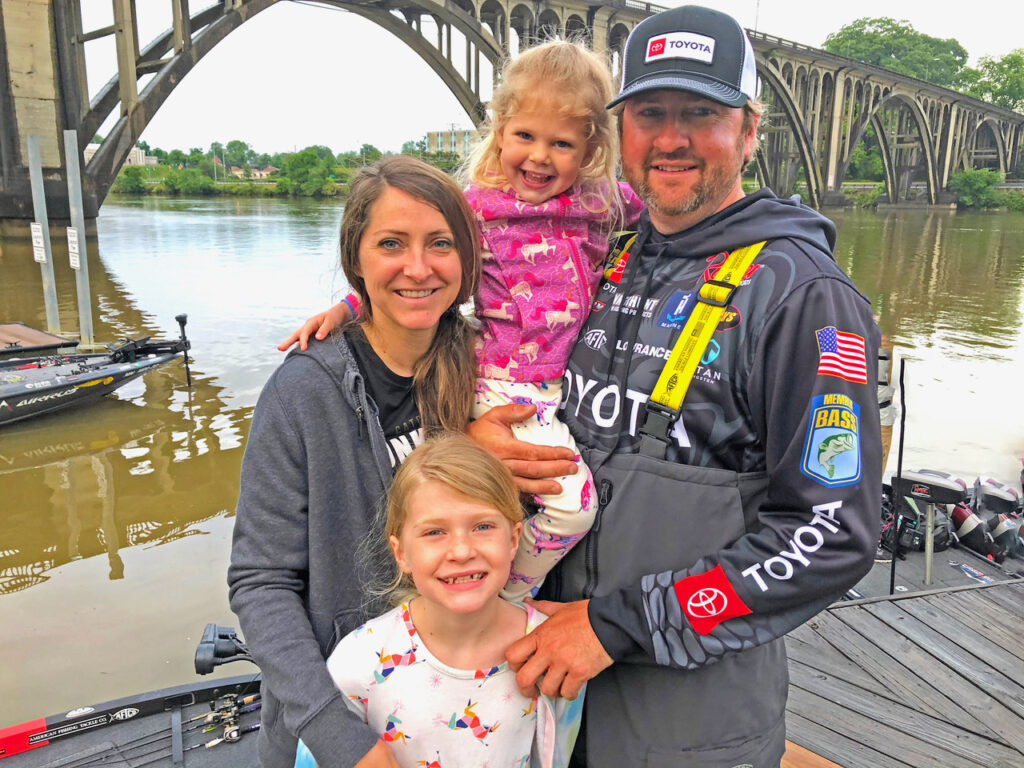 “Absolutely, 120-percent, no doubt, the toughest part of my job is the time I’m away from my awesome wife Emily and my two little girls,” said Arey minutes prior to Championship Monday at the Whataburger Bassmaster Elite on Neely Henry.

Emily certainly feels the heart-tugging sacrifice of her husband’s career too. So like she’s done roughly 20 other times during their 15-year marriage, as soon as the scales stopped spinning Sunday afternoon, and she knew for certain Matt had made the championship round, she packed up and headed-off in a hurry from their Shelby, NC home to be there in person to cheer him on.

“The girls and I were watching Sunday’s weigh-in at home, and we knew it was going to come down to ounces whether Matt squeaked into the Top 10. So, I refused to start packing the Sequoia until we knew for sure he’d made it because I didn’t want to jinx it,” she said with a smile on the dock Monday morning standing next to Matt.

She and daughters Reese, age 8, and Wren, age 3, drove six hours, arriving in Gadsden just before midnight Sunday night. Matt had called a local hotel and reserved them a room not far from the official launch ramp so they’d have a safe and comfortable place to land, while he slept 45 minutes away at fellow pro Scott Canterbury’s house, where he’s stayed all week.

“They were crazy wild excited to get here and sang songs from Strawberry Shortcake at the top of their lungs for pretty much the entire drive,” laughed Emily. “When they weren’t singing, Wren was talking about her daddy catching big “shishes” – that’s how she says “fishes”.”

Daddy will need his share of big “shishes” on Championship Monday to make a run at winning from the 10th position, but on this fishery it’s certainly possible. He plans to throw a big topwater walking bait to seek strikes from above average sized Coosa River largemouth.

“No matter where I finish – hero or zero – I’ve got my girls here – so I kinda feel like I’ve already won without making a cast,” concluded the Team Toyota pro before morning launch.