DAYTON, Tenn. — Despite a much later boat draw than they were hoping for, the Meigs County High School team of Connor Mason and Archer Reese brought in a three-fish limit of 15 pounds, 5 ounces to take the lead at the Mossy Oak Fishing Bassmaster High School National Championship presented by Academy Sports + Outdoors on Chickamauga Lake. 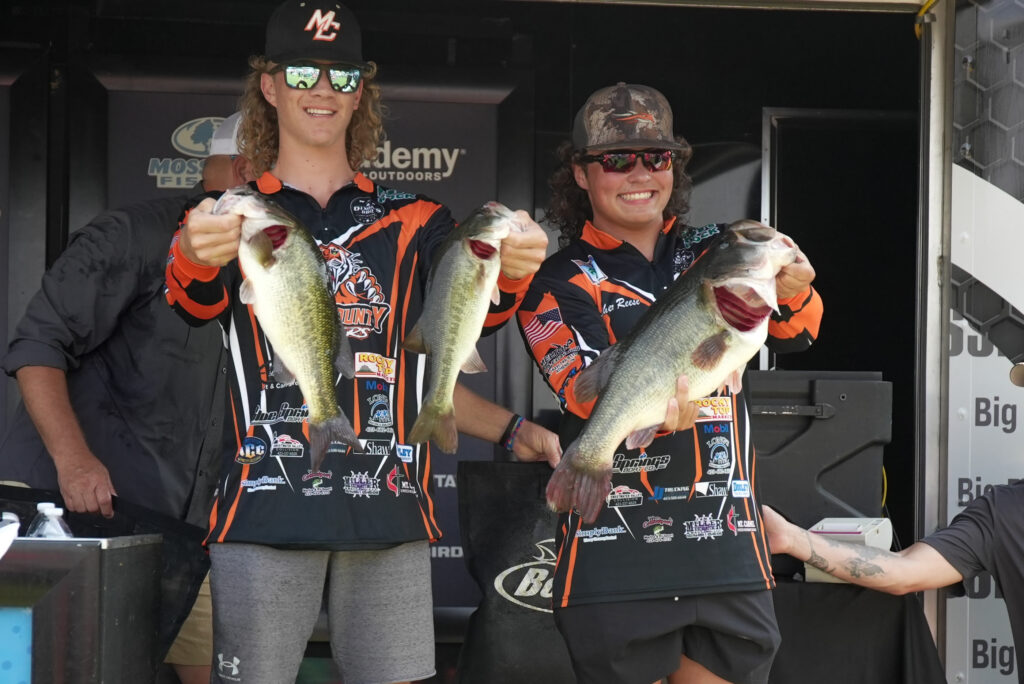 Mason and Reese hold a 4-ounce lead over the second-place team of Carter Doren and Ryan Lachniet from the Sin City Bass Club in Las Vegas and have a 1-pound, 3-ounce advantage over the Quincy High School Bassmasters team of Brent Randall and Carson Falk.

The Meigs County duo also earned Big Bass of the Day honors with an 8-11 largemouth that Reese hauled in.

With temperatures soaring into the high 90s this week, teams were only able to bring three fish to the scales for this event instead of the usual five-fish limit.

The rising seniors made the National Championship through the Tennessee B.A.S.S. Nation Southeast Regional trail, earning the fifth and final berth to Chickamauga from that division. During practice, Mason said they found a good early-morning pattern.

“We were superconfident (about fishing) early in the morning, but when we got our late boat number (269) the confidence went down,” he said.

Unsure of how active the fish were going to be, the duo ran to their first spot and hooked into the massive largemouth for the first fish of the day.

“As soon as my bait hit the water it was gone,” Reese said. “I set the hook and we got it in. It didn’t take long, I just horsed it in and netted it. It was hot when we caught it, so we had to take a little break in the dock beside us from the heat and the fish catch.”

For Mason, that fish changed the entire outlook of the day.

“Our confidence went through the roof,” he said. “You fish completely differently when you have confidence in what you are doing.”

After their short break, the duo quickly filled out their limit before the bite tailed off with the afternoon heat. Throughout the day, Reese said he and Mason are bouncing around a bunch of different spots, hitting every depth zone in the process.

“We are here and there. That’s how we were during practice (too),” Reese said. “We would pull up to a spot and catch one fish, go to the next spot and do something completely different and with a 10-foot water level difference and catch fish there, too.”

With an earlier boat draw and the lead, Mason said they won’t be changing much on Day 2.

Had it not been for a dead-fish penalty, Doren, a 2021 Bassmaster High School All-American, and Lachniet would have been tied for first, but the penalty pushed the duo back to 15-1 for their Day 1 total.

The Sin City Bass Club anglers made a long run south, but did not find success early on. After trying a couple different things with no success, the duo made a move to some deeper brushpiles and it paid off with a 5-pounder and a 7-pounder. They missed another big fish that would have improved their bag.

“We caught the big one and our confidence went up; we got in a groove and started catching them,” Doren said. “On our forward-facing sonar, we watched a 5-pounder eat (the bait) and we whiffed on it.”

During practice, Lachniet said he and Doren located several groups of fish and would leave after they hooked up with a couple of them.

“We would catch a couple and then we would leave. We knew we were around big fish, but you just never know,” he said. “We are going to plan on doing the same thing tomorrow and not lose any fish.”

Hailing from the state of Florida, Falk and Randall found Chickamauga similar to Lake Seminole, their home body of water. They took that knowledge from their home lake and caught a three-bass limit of 14-2, landing a 7-pounder in the process.

“We are 30 minutes from Seminole and we have grass, ledges, shellbars,” Falk said. “So, we are right at home in Tennessee. We enjoyed the day and had a lot of fun.”

After spending most of practice idling and scanning, the Quincy High School duo got Day 1 started with a small limit, Randall said, and slowly culled up throughout the day.

“We moved on and caught one good one and put it in the box,” he said. “With 10 minutes before we had to leave, I caught a big, big one.”

Falk and Randall rotated through about 10 spots and caught 20 total fish, but only six of those were keepers. Randall said they are planning on running through the same rotation on Day 2.

The full field will compete again Friday with takeoff starting at 6:45 a.m. ET from Point Park and weigh-in back at the park at 2:45 p.m. The Top 12 teams after Day 2 will fish on Championship Saturday.