About the Lake
Wright Patman Lake is a reservoir located in the northeast of Texas, about 20-miles south-west of the City of Texarkana. The reservoir is about 31.75 square-miles with a max depth of about 40-feet. The reservoir was formed in 1956 by the U.S. Army Corps of Engineers on the Sulpher River as a flood control/water conservation lake for downstream communities. Home to species such as Blue Catfish, Channel Catfish, Flathead Catfish, Crappie, Sunfish, and White Bass, Wright Patman is loaded with Largemouth bass and double-digit bass are caught annually. Although the lake lacks aquatic vegetation, the predominate cover includes a variety of flooded timber & brushes, creek channels, and riprap. 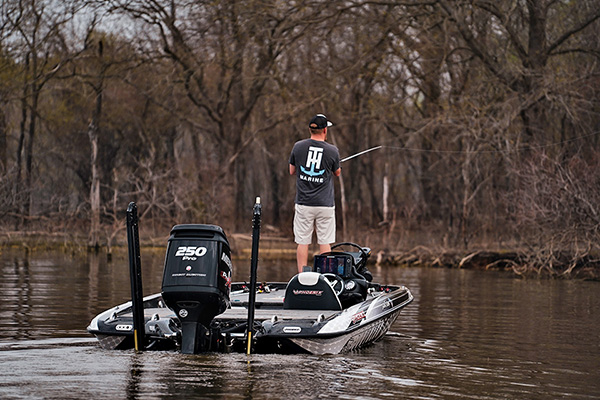 Anglers Take
Landon Tucker enjoyed a top 5 finish to begin the season at Lake Eufaula and is looking to keep his points stands in check at Wright Patman. The Georgia angler made the trip to Texas to pre-practice on Patman to learn the lake.

“When I was there the water was about 228.5’ elevation, roughly 2.5’ high. I did a bit of looking around for brush, similar to what I did at Eufaula. I did fish a bit and caught them pretty well but the lake will fish small and guys will be fishing a lot of the same water. I anticipate the fish might be caught in all three phases, pre and post spawn as well as fish on beds.”

Although Tucker had some success and learned the lake a little, he is keeping an open mind come official practice. If the water level changes, so will the fish. Tucker is going to spend the official practice period exploring and doesn’t plan on fishing a whole lot. Keeping his options open and fishing the conditions will be key.

A “semi” local angler, River Lee also spent some time on Wright Patman before the cutoff period and expects to find stable muddy water come the tournament which will have a lot of guys fishing the same water during the event. The dirty water is normal on Wright Patman and the fish don’t seem to mind.

“This lake has a good population of bass but it has not seen many multi-day events. I expect that as the event goes on the fish will feel pressure and bites may be hard to come by. The fish should be in and around the brush regardless as the water will be stable, but I won’t rule out a shad spawn bite either. The water temperatures should be in the mid to upper 60’s and even low 70’s. If the weather does stay warm all along (through the event), the shad spawn might be a player but it’s not like other lakes. There are so many shad in this lake the bass don’t have to move far to get on them so places that look like typical shad spawn areas won’t necessarily have the bass, even if they load up with shad.”

Lee lives about 2-hours away and calls Rayburn home. With minimal experience on Patman, Lee plans on fishing his strengths and keeping it simple to hopefully catch pressured bass. The typical baits will work for this time of year and if someone can figure out how to catch them around other anglers, they will have an advantage.

An Oklahoma angler who will be the local favorite at Stop Six Grand Lake, Jeff Dobson is looking forward to fishing the Texas reservoir this week. Dobson spent a few days prior to the off-limits period and like the others, it was more for exploring than actually fishing.

“I practiced for two days and really only fished for 4 hours on day two. I did really well but I am not going to get too caught up in that. I really wanted to learn how to navigate because when the water drops, it can be confusing to get around. I found some water in a creek that was cleaner than anything else and even fished up the river some. These fish must be used to dirty water because the cleaner water didn’t seem to make any difference to where I got bit.”

Dobson also expects there to be some sort of mix of all three spawn phases and is preparing for it all. He does believe more fish have spawned or are spawning than not, however. One of the biggest factors for this event will be pressure, and Dobson knows a pattern will prevail.

“This event will be very interesting as the lake is looking like (from practice) it will be fishing really small. A lot of anglers will find the same thing and the one who figures out how to manage the pressure and still get bites will win. I am not sure what the pattern will be, but this one will not be won off a spot or two.”

Similar to the other anglers, Dobson thinks getting a good bag on the first day and protecting it with good bags will be how it all plays out.

The angler with the shortest commute and most experience on Wright Patman, Mike Yoder, doesn’t believe the lake level will give him an opportunity to use his “local advantage” and even believes it’s a “coin flip” that knowing the lake might hurt him.

“If the water got up high like the last 6 years, I would have caught them extremely well. The big misconception is that as a local, I have some special honey holes, and I do, but its dry ground this week and will be for the event. For a small event, 25 to 50 boats, I might have some advantage, but with 108 anglers of this caliber, there is no way.”

The two other local lakes – Milwood and Lake of the Pines – are fishing extremely well, but Wright Payman is not. Yoder thinks although the current water is stable, it’s a tough lake level for this event.

“The Army Corps of Engineers is going to keep it tough and were going to hit a bad time – the “funky” time. When it froze down here, and then was warm for a while, I think the majority of the fish busted the bank and spawned. It seems like this event is falling exactly between the spawn, post-spawn, and before the shad spawn gets good.”

It’s no doubt the pressure and cooler nights will keep the fishing tough, and he who can fish the moment will make it happen.

“I purposely didn’t pre practice for this event because I know it’s going to be a changing event and I’ll have to fish the moment every single day. I didn’t want to get any misconceptions or get on something that may change. I want to show up and fish what the lake has to offer.

Yoder believes that its going to be 50-50 if his advantage not only helps him, but hurts him as well. The three issues – post spawn funk, water level, and water color – are going to all factor. He knows he can’t get caught up in running all over and needs to settle down.

“I need to overcome those three factors and the guys who do the same thing will do well this week. Local events have seen the weights drop drastically and it’s been that way for a few weeks. If the weather stays warm and the nights don’t get too cold, the fishing should improve.”

How to Watch
Tune in daily April 22nd through the 24th to thenationalprofessionalfishingleague.com to watch daily LIVE Coverage, the LIVE Leaderboard, LIVE Blog, and daily on the water photo galleries of the anglers on Wright Patman.

Under the Go Live Tab, choose LIVE Broadcast with links to the real-time LIVE Leaderboard with estimated weights entered by the anglers.