Todd Castledine Leads Day One of the Toyota Series Championship Presented by A.R.E. on Lake Guntersville

GUNTERSVILLE, Ala. (Nov. 3, 2022) – A tournament field of 194 boats – each featuring a pro and a co-angler – began their three-day competition for a top cash award of up to $235,000 at the 2022 Toyota Series Championship Presented by A.R.E. at Lake Guntersville in Guntersville, Alabama, Thursday. The bass-fishing championship, hosted by Marshall County Tourism and Sports, is the culmination of the 2022 Toyota Series Presented by A.R.E. season. 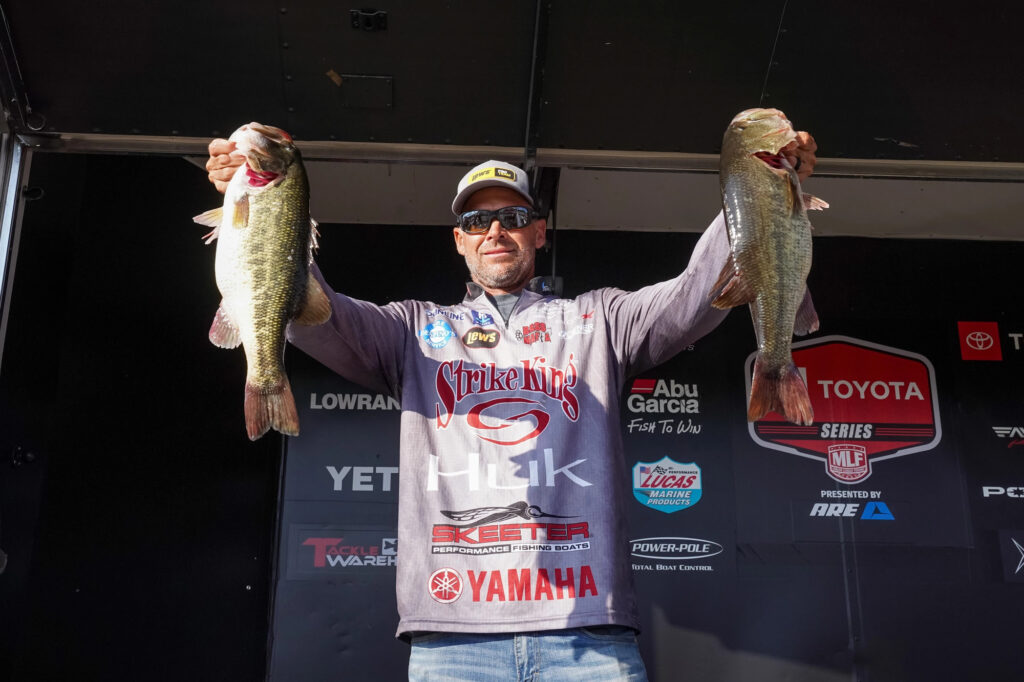 The Texas pro said he felt like he had a good game plan for the afternoon bite going into Day 1, but everything changed once he hit the water.

“I felt like my best time to catch the fish I was targeting was in the afternoon, but the mornings were still a bit of a mystery for me,” said Castledine. “My goal going into the day was to catch two good bass before 11 a.m., and this morning started out about like I expected it to. By 10:45, I had caught two bass, and one of them was a good one, so I was pretty happy. By 11:15 I had caught six or seven and figured out a few patterns that were working well.”

Castledine said now that he’s located the bass early and figured out what they are doing, the morning bite might actually be better than he anticipated.

“I really thought I had the timing dialed in for the afternoon, but the fish were about two hours later today than I expected, which was a little worrisome at first,” Castledine continued. “Although my afternoon didn’t end up going quite as well as I thought it would, I feel really good having an edge on the morning as well.”

Castledine, who has fished in the Toyota Series Championship nine times and finished in the Top 10 twice, said he threw multiple baits during Day 1, but preferred to keep them under wraps, for now.

“I know it’s early in the event, but I feel good about leading today because I really wasn’t expecting it,” Castledine said. “Last year I made the Top 10 during the championship, but I just barely made it through, and it’s been a while since I caught a decent bag on the first day of an event, so I’m feeling great going into tomorrow.

The top 20 pros after Day One on Lake Guntersville are:

The top 20 Strike King co-anglers after Day One on Lake Guntersville are:

Fans are welcome to attend the daily takeoffs and weigh-ins and also follow the action online through the “MLF Live” weigh-in broadcasts and daily coverage at MajorLeagueFishing.com. The 2022 Toyota Series Championship Presented by A.R.E. will premiere on CBS Sports next fall.

The full field of anglers will compete on Days 1 and 2 of the event, with the top 10 pros and top 10 Strike King co-anglers based on cumulative weight from the first two days continuing to the third and final day on Saturday. The 2022 Toyota Series champions will be determined by the heaviest three-day total weight.

Pros and co-anglers can qualify for multiple contingency awards based on final standings in the championship, including the lucrative $35,000 Phoenix MLF Bonus for pros. The winning Strike King co-angler will earn a new Phoenix 518 Pro bass boat with a 115-horsepower Mercury outboard motor.

The 2022 Toyota Series Presented by A.R.E. consisted of six divisions – Central, Northern, Plains, Southern, Southwestern and Western – each holding three regular-season events, along with the International division. The highest finishing pro from each division at the championship will claim a $10,000 bonus. The bonus will go to the second-highest finishing pro in the division represented by the overall champion.