Bassmaster Elites Series rookie Tyler Rivet is hoping to end the 2019 season on a high note this week on beautiful but intimidating, Lake St. Clair. Rivet is coming into the AOY Championship in 41st place on the Toyota Angler of the Year standings – just barely inside the cut to qualify for his 1st Bassmaster Classic in March of 2020. 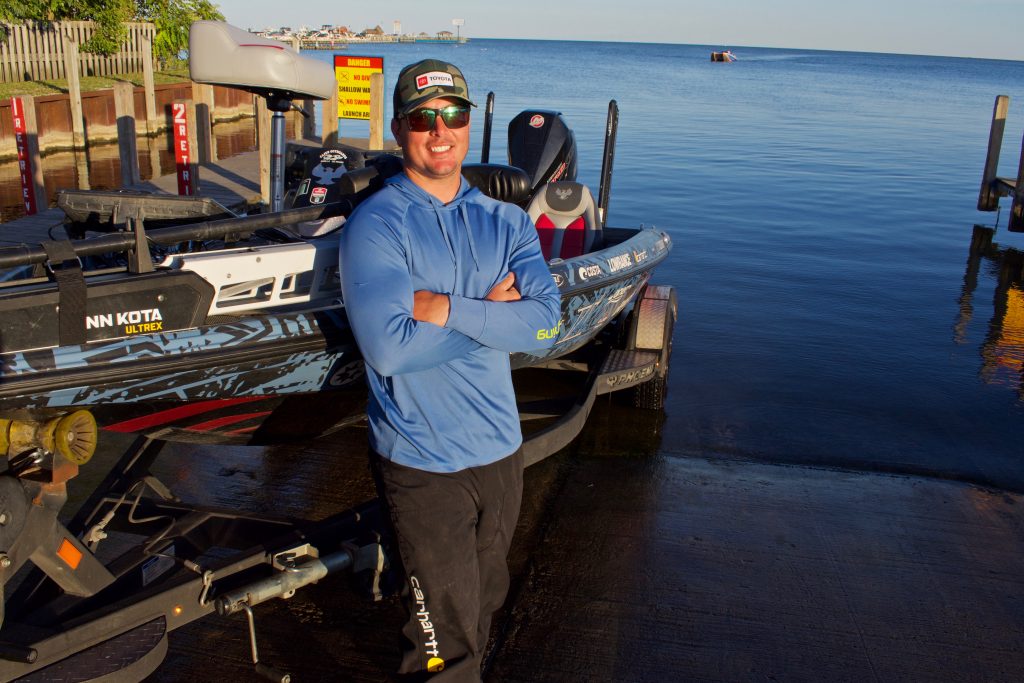 The amicable Louisiana native is much more comfortable fishing shallow water for largemouth as opposed to searching for smallmouth in the ocean-like waters of Lake St. Clair. But he knows he’ll need to hold or improve his position in the AOY points race to secure a Classic berth, which is why he is hunting smallies this week.

“I won’t lie, I’ve looked to the bank and thought about largemouth quite a few times while smashing through big waves during practice,” Rivet joked. “But I know I can’t bunt in this tournament; I have to fish to finish the highest I possibly can. I have to fish to win.”

Having his back up against the wall isn’t a new prospect for Rivet. A week ago on Lake Tenkiller, Rivet was merely hoping to qualify to fish this event. The former Carhartt College B.A.S.S. standout was in 50th place in the AOY rankings to begin the final regular season Elite Series tournament of the year. After stumbling on day one – only brining three keeper bass to the scales – Rivet knew his chances of qualifying to compete in the AOY Championship were slim.

But Rivet came out swinging on day two and sacked up one of the biggest limits of the tournament on a fickle Lake Tenkiller, including a 5+ pound largemouth that took big bass of the day honors. Ultimately finishing the event in 18th place, which raised his AOY stock to 41st place.

With his AOY Championship position locked in place, the brand new Toyota Bonus Bucks participant hopped in his Tundra to make the 20-hour trek to Michigan with dreams of giant smallmouth.

Sounds like a storybook, “buzzer beater” finish for Rivet to qualify for his first Classic and keep a childhood dream alive, right? Well it certainly was… the only problem is now he must do it again against the top 50 Elite Series anglers of the 2019 season this week. And he’ll have to do it on an unfamiliar fishery full of new challenges and opportunities.

“This is about as different from fishing in the backwater bayous of Louisiana as it can get,” Rivet said with a quick smile. “I’ve never fished on a lake like this and had never driven in waves as big as I was in yesterday. I’m talking like five or six footers. I was thanking God I was driving a Phoenix 721 Bass Boat as I was rolling through those waves.”

Rivet traded his flipping stick for a spinning rod and butt-seat on the front deck of his boat to fight the high winds, rolling waves, and hopefully plenty of big brown bass this week. While it’s not exactly his specialty, Rivet isn’t afraid to out work the water and step outside his comfort zone to chase down his dreams on Lake St. Clair.

“I actually like smallmouth fishing and believe it or not I love fishing with a dropshot,” Rivet said. “I had to learn how to fish a dropshot while fishing in college. The Carhartt College Bassmaster Series goes to diverse fisheries all over the country; being diverse and working hard were necessities in college just like they are on the Elite Series. Those qualities have served me well in the past and hopefully they’ll help me out this week, too.”