BRANSON, Mo. – Impending storms were a storyline all day at the Bass Pro Tour Bad Boy Mowers Stage Seven Presented by Covercraft, and they finally became the story at 6 p.m. as Group B’s Elimination Round on Table Rock lake was cut short by a lightning-caused weather delay that lasted until 7:20 pm. 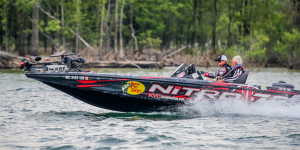 When things were deemed safe to resume, anglers had 40 minutes to make a move. Only one significant change happened during those closing moments: Bradley Roy exited the Top 20, and Michael Neal jumped above the Elimination Line and into his
As the weather became the story, it overshadowed great days from several anglers, some big movers, and a Kevin VanDam sighting at the top of SCORETRACKER®.
VanDam, Suggs Lead the Pack
The leading angler when the storm arrived was Scott Suggs with 122 pounds, 6 ounces. He backed up a solid day during the Shotgun Round with 55 pounds today.
However, in the final moments, VanDam pushed himself to a spot in the leaderboard he’s found himself in many tournaments: the top.
VanDam has had a trying season, but his 69-3 on Monday was the best of anyone in the field as he ended with 123-14.
Big Movers
Nobody made a bigger move than Andy Montgomery, who started the day in 36th and found himself in 33rd after Period 1. A 33-bass, 44-pound tally in Period 2 salvaged his tournament, and he found himself in 12th place to finish the day.
Others making moves were: Mark Davis (21st to 10th), John Murray (24th to 14th), Greg Hackney (28th to 7th), and Jesse Wiggins (23rd to 17th).
Falling out of the cut today was: Gerald Swindle (15th to 24th), Brent Chapman (16th to 25th), and Kelly Jordon (17th to 27th), and Alton Jones, Jr. (18th to 21st).
Raining on Roy’s Parade
When the weather delay was called, Bradley Roy was safe, but he slipped to 21st in the final moments.
He caught three fish for 4 pounds, 2 ounces post-weather delay but went dry in the final 30-minutes. A rally in the closing moments by Michael Neal pushed Roy out.
Jones, Jr. Falls Short
When the weather delay began, Alton Jones, Jr., was in 21st place, but agreed with the call to stop fishing due to lightning in the area.
“I was so close to the cut, but no bass or a $6,000 check is worth losing someone’s life,” he said on MLF NOW!, referencing the minimum amount he would have won had he advanced.
He had one more chance when fishing resumed but slipped one spot to 22nd.
More Weather On the Way
The weather in the Missouri Ozarks changed for the worse Monday afternoon, and similar forecasts are predicted for Tuesday’s Knockout Round. The forecast calls for a high of 86 degrees, an 80-percent chance of rain, and more afternoon thunderstorms.
Daily Winners
Elimination Round 2 daily awards were: • The Berkley Big Bass of the day was Justin Atkins’ 4-9 largemouth. • Andy Montgomery won the Berkley Catch Count award with 45 bass on the day.  • VanDam’s 69-4 earned him the Phoenix Boats Daily Leader award.
Looking Ahead
Weights will be zeroed for the 40-angler Knockout Round Tuesday, making the Knockout a one-day scramble. The Top 10 anglers in the Knockout Round will advance to the Championship Round on Wednesday, June 5.
How, When, Where to Watch
Competition begins Tuesday at 12 p.m. CT, with live, official scoring available via SCORETRACKER® on MajorLeagueFishing.com and on the MLF app. The MLF NOW! live stream begins at 11:55 a.m. CT with coverage of Period 1, with Steven “Lurch” Scott and Rob Newell calling the live action. Full coverage continues at 2:30 p.m., when Chad McKee, JT Kenney, Marty Stone, and Natalie Dillon pick up the commentary and analysis until lines out at 8 p.m.
There will be no Berkley Postgame Show until Wednesday’s Championship Round.