Kevin VanDam wears a prideful grin as he stands in front of the Otsego Bulldogs school sign on an early September morning. Not only did he attend kindergarten through 12th grade there, but his sons Jackson and Nicholas graduated from the district as well. 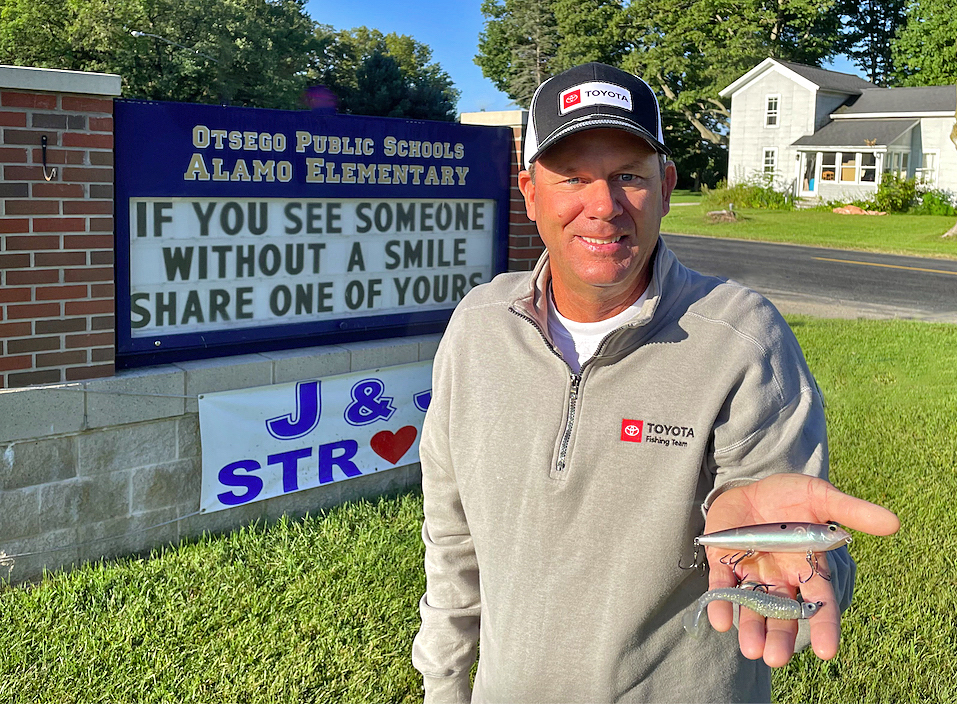 “My favorite elementary teacher was my 4th grade teacher Mr. Sleep because he loved to hunt and fish,” VanDam remembers fondly.

It’s doubtful Mr. Sleep knew his student would someday become the greatest bass angler of all time, but one thing’s for certain, VanDam didn’t become the best there’s ever been by letting the often-challenging bass fishing days of early September take his lunch money.

All about the bait

“Early September can be way different in Michigan, where overnight temps are in the 50s, versus places like Oklahoma, Texas or Georgia where it still feels way more like August most days. But no matter where you are, bass fishing is about the baitfish right now. So, you need to get in touch with where the majority of the shad are,” explains VanDam.

Find the Thermocline on your sonar screen

While hot September days in the South can make anglers think bass should be deep, don’t forget, the hottest days of summer often create a shallow thermocline around 12 or 15 feet deep, and oxygen levels below that are a struggle for both bass and baitfish.

So, bump-up the sensitivity a notch on your sonar and look for the defined ‘band’ in the middle of your sonar screen indicating the thermocline. Once you’ve identified its depth – most of your search for bait and bass should be in water at that depth or shallower.

Asked to name two lures he never leaves home without in September, VanDam chose a Strike King Sexy Dawg topwater, and a 3.75” Strike King Rage Swimmer on a 3/8-ounce head. He throws the Sexy Dawg on 50-pound braided line, and the small swimbait on 14-pound fluorocarbon.

Both lures ultimately play to the presence of baitfish and are super effective whether he’s working around shad on a main lake point or way up lake near a shallow gravel bar. Or even better, should a school of 3-pounders blow up on the surface in the midst of some early autumn schooling activity, both of these lures are the perfect tool to hook a piece of the action.

“Obviously, it’s hurricane season, and the destruction Hurricane Ida caused is heartbreaking, but hurricanes often cause a lot of rain as they get further inland over places like Northern Alabama and Tennessee at this time of year. That causes a big influx of water, and baitfish will migrate toward that incoming water,” he reasons. “So, check the backs of creeks and pockets when lots of new rainwater is coming in.”

Where to focus your search

“If I’m on a highland reservoir like Table Rock right now, I’m focusing on points, and the rip rap on bridge corners, but if I’m on a current driven reservoir along the Tennessee River like Wheeler, Alabama, I’m going to start my search on the upper end where current is most prevalent around shallow gravel bars. Because again, it’s all about the bait in September, and those are the areas where shad move shallow first on a current driven reservoir,” says VanDam.

And as for his days at Otsego Public Schools. “I liked school. I’d say I was a pretty good student. Never a troublemaker,” VanDam concluded with a grin.