If you catch a 10-pound bass from Oklahoma’s iconic Grand Lake O’ the Cherokees a few years from now, Kevin VanDam is probably the first person you should thank.

VanDam, a Michigan native, and the man most consider the greatest tournament bass angler of all time, generously gave $5,000 to the Oklahoma Department of Wildlife for the purchase of several thousand fingerling bass containing “F1” genetics. 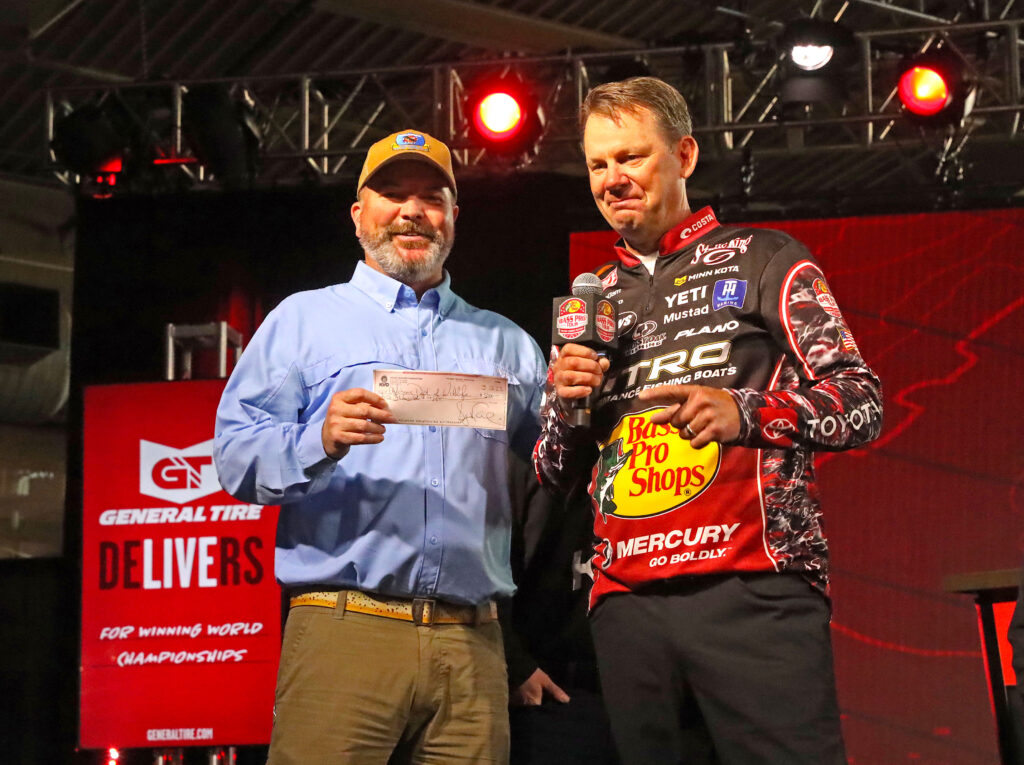 The fingerlings feature a cross between cold weather tolerant native largemouth genes, and Florida strain bass genes known for their fast and weighty growth, and as of June 2, 2022 there are 31,000 of the fingerlings now swimming in Grand.

“Grand Lake has always been special to me. I have two major wins on Grand, and I’ve always felt really at home there. So, during MLF’s REDCREST event on Grand this spring, Sherry and I wanted to do something special as a gift from the Kevin VanDam Foundation to give back to that particular fishery,” explains VanDam.

However, much like it takes a village to raise a child, it takes a group effort to raise trophy-size largemouth bass. And the fact so many private donors were inspired by VanDam’s donation and matched his efforts financially to help increase the number of fingerlings purchased is impressive.

Groups like the Swank Family Foundation, Whiskey Point at Grand Lake, Oklahoma Wildlife Conservation Foundation, Southstone Construction, Flying Squirrel Farms and others combined to join VanDam’s generosity, and quickly raised around $40,000 total for the purchase of nearly 100,000 F1 genetic fingerling largemouth over the next few years.

“The goal is not to add more fish to Grand Lake, because Grand already has a highly abundant largemouth population. So, our stocking rate is only going to be around two fish per acre,” says Brad Johnston, ODWC Fisheries Biologist.

By the numbers, while two fingerlings per acre may not seem like a lot, depending on how water levels and natural predation affect this particular group of fingerlings, statistics prove around 20,000 of these Florida-strain fish will likely be swimming as fast-growing adults in Grand Lake a few years from now.

“The goal of this project is to stock fish with the potential to reach 8 to 10-pounds more frequently than we historically see caught at Grand,” adds Johnston, who is tremendously grateful for the wave of generosity VanDam began.

The bottom line is the bottom line. It costs money to grow fish, especially larger fingerlings of the F1 genetic variety.

And even though a ‘trial run’ at nearby Lake Eucha proves F1 are handling the colder climate of Northeastern Oklahoma and beginning to flourish, that doesn’t mean agencies such as the Oklahoma Department of Wildlife can afford to raise the hundreds of thousands of fingerlings necessary to make an impact on a much larger reservoir like Grand.

“Kevin and Sherry VanDam’s donation got the ball rolling. Others generously matched their donation, and collectively they allowed us to keep going with our F1 stocking program on Grand. To have an angler of Kevin VanDam’s caliber choose to help us like he did deserves a huge thank you,” concludes biologist Johnston in grateful fashion.